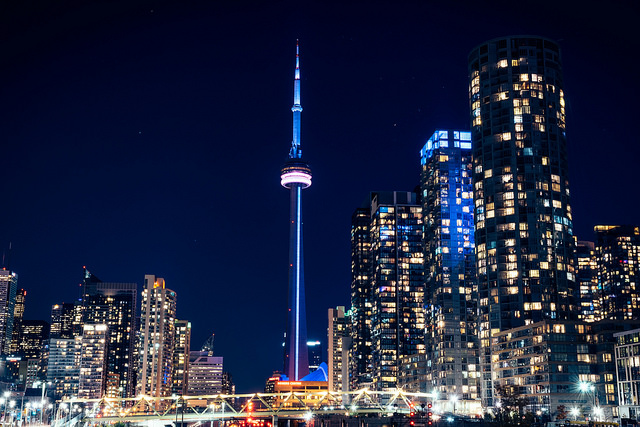 Toronto at Night by Raphaël Duperret

New year picked up where the old one left off: The number of sales is increasing and listings are receding, making the price growth a difficult issue. Greater Toronto Area REALTORS® reported 5,188 residential transactions through TREB's MLS®  System in January 2017. That means 11.8 per cent compared rise from 4,640 sales reported in January 2016.

Condos experienced the biggest rise in sales: 26.7 per cent in year-over-year comparison. Detached houses came second with 7.8 per cent rise and in a very close third place, townhouses with 7.2 per cent. The sales of semi-detached houses dropped by 5.8 per cent.

It's no surprise that the increasing condo sales didn't record a significant change in the average price. Average price went up only by 14.5 per cent, ranking higher, but still maintaining availability. Average price for a condo was $442,598. However prices for detached and semi-detached houses went up by 26.3 and 28.1 percent respectively, explaining the sudden drop in sales for semis. The average price of townhouses increased by 27.4 per cent. 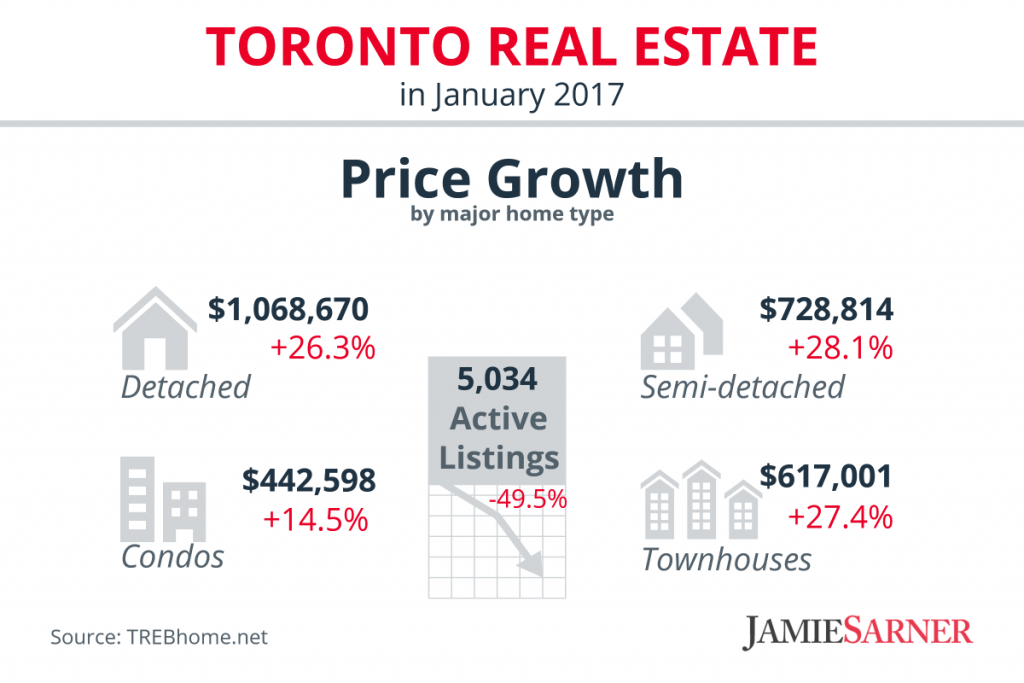 The low listings ratio, which is causing the average price growth, presented itself in 49.5 per cent decrease in active listings in a year-over-year comparison. New listings were down by 17.6 per cent. This troubling phenomenon accounted for average price rising 22.3 per cent and $770,745 for GTA. TREB’s Director of Market Analysis Jason Mercer doesn't think anything will change on this front in 2017:

"The number of active listings on TREB’s MLS® System at the end of January was essentially half of what was reported as available at the same time last year. That statistic, on its own, tells us that there is a serious supply problem in the GTA – a problem that will continue to play itself out in 2017. The result will be very strong price growth for all home types again this year."

High price growth is one of the factors responsible for the fact that young families are opting more for budget-friendly solution: condos. Replacing the traditional white-picketed fence wutg vertical communities became a new trend in Toronto market.  City of Toronto provided data stating that from 2011, 32 per cent of households with children lived in mid and high rise buildings. During the same year, the number of families with children living in high-rise units rose by around 15 per cent with 10,145 more families living in high-rise apartments. Since then Toronto witnessed a boost in family-friendly condos and we can expect this trend to continue trough 2017. Toronto Real Estate Board President Larry Cerqua predicts even more first-time buyers will flood the market this year, dominating the buyers market:

"Home ownership continues to be a great investment and remains very important to the majority of GTA households. As we move through 2017, we expect the demand for ownership housing to remain strong, including demand from first-time buyers who, according to a recent Ipsos survey, could account for more than half of transactions this year. However, many of these would-be buyers will have problems finding a home that meets their needs in a market with very little inventory."