A3 Napoli: Fried and Wood-Fired Dishes Bring Naples to Toronto

Last year, a slice of Naples made its way to College Street downtown Toronto, in the heart of Little Italy. A3 Napoli is a casual fast food restaurant serving wood-fired pizzas and fried snacks. Named after a neglected roadway in Italy, A3 "was the road that took us to Naples. We want A3 to be the path that brings Naples to you."

A partnership between Chef Rocco Agostino (Pizzeria Libretto) and Nick auf der Mauer (Porchetta & Co.) is what brought A3 Napoli to life. The Librettos have been dominating the Italian pizza scene in Toronto for 9 years since opening their first of now four locations. Each location rolls out about 2,000 pizzas a week, so you would think they have their hands full. Instead, they partnered with Porchetta & Co, the geniuses behind slow-cooked roast pork sandwiches on Dundas Street West. In 2015 alone the teams together launched a fourth Libretto location on King West, a second Porchetta & Co., and A3 Napoli. 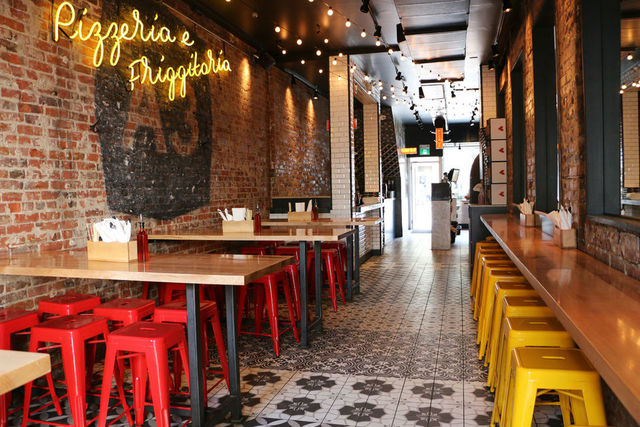 Edible examples of their partnership seem to make their way to the menu too. This year, Porchetta & Co. and A3 Napoli aligned to highlight what they each do best: porchetta and pizza – with an exclusive pie created between the two of them. Slices of Chef Nick auf der Mauer’s roast straight from the Porchetta kitchens topped the mouth-watering pizza, along with béchamel, parmesan, provolone, and pear. Sprinklings of pistachio, fried sage, crackling, and for sweetness, a drizzle of honey, were sprinkled on top. The $15 pizza embodied partnership: at once it was heavy, with a light crust, sweet and savory, salty but refreshing. 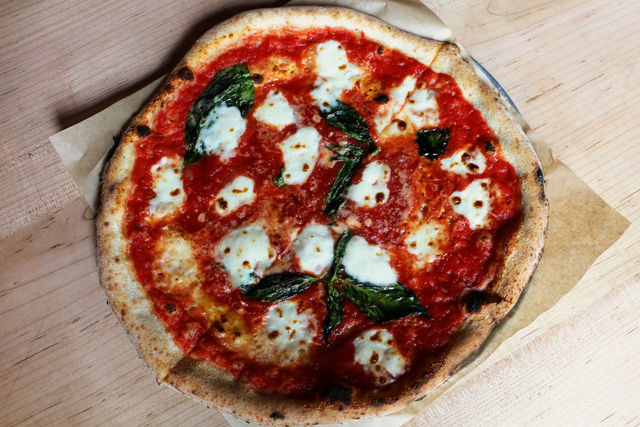 A true test of an authentic Italian pizza is one that A3 does well: the traditional margherita ($8.75). With a light lathering of tomato sauce, pungent splotches of mozzarella cheese, a few leaves of basil, and a drizzle of olive oil on top of a floppy, and lightly floured crust with charred dark bubbles decorating the sides – simple has never tasted better. Unlike Libretto’s more extensive selection, the menu at A3 Napoli only offers five other pizza options. Red pizzas include the: Maialino ($13) with nduja, pepperoni, crispy pork, and basil, Diavola ($13) with sopprasetta, bomba, and basil, or the Marinara ($7.5) of tomato, garlic, oregano, and basil. They have one white pizza ($12) with mushroom, mozzarella, panna, provola, carmelized onion, garlic, and thyme. Always changing weekly features allow the pizza masters to create specialty pizzas with seasonal Canadian ingredients. 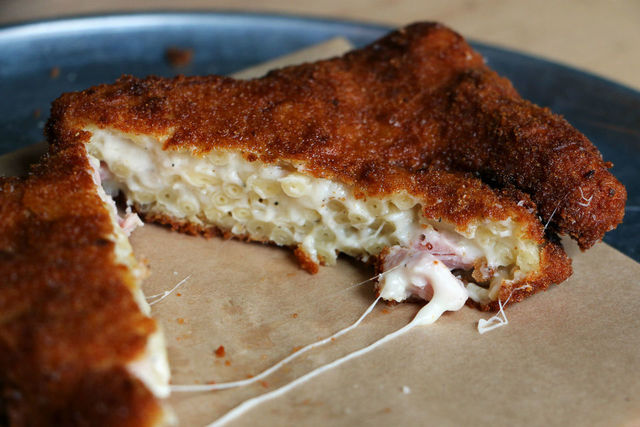 In addition to pizzas, A3 Napoli has a variety of fried foods like fried pizza with ricotta and pork ($13), fried shrimp, calamari, and cod ($14), or fried arancini, meatballs and mozzarella ($8). Their deep fried mac & cheese ($5) was a delicious, greasy, gooey mess that is insanely rich with salty bits of ham wedged inside. "We are passionate about bringing the Neapolitan street food experience to Toronto. The the unruliness, the mind blowing flavours, the fun, the speed, the city grit. Ricotta, ham, provola, basil, tomato." For dessert, they offer zeppole di san roberto, an Italian pastry of fried dough encased with cinnamon sugar and Nutella sauce. Everything is fried in their custom deep fryer called a friggitrice, a massive structure specifically designed for A3 and handmade in Naples by Stefano Ferrera. It can hold 20 liters of oil at any given time. 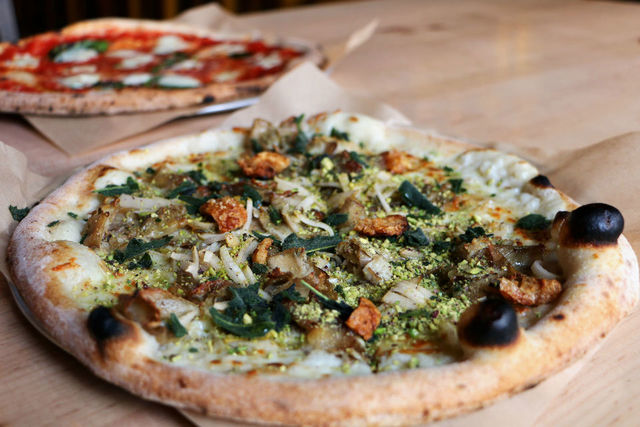 A similar story exists for their 2.5 tonne pizza oven. Ferrara is renowned for his Neapolitan pizza ovens in Naples, with his family being in business for 3 generations. A3 Napoli’s pizza oven was the biggest one made to date, at seven feet tall and six thousand pounds. Pizzas in the oven only need to bake for 90 seconds in the 900 degree powerhouse. Somehow, for now, the oven made its way into the A3 Napoli kitchen without buckling through the floors, and serves as the centerpiece of the brightly lit, retro-styled restaurant. 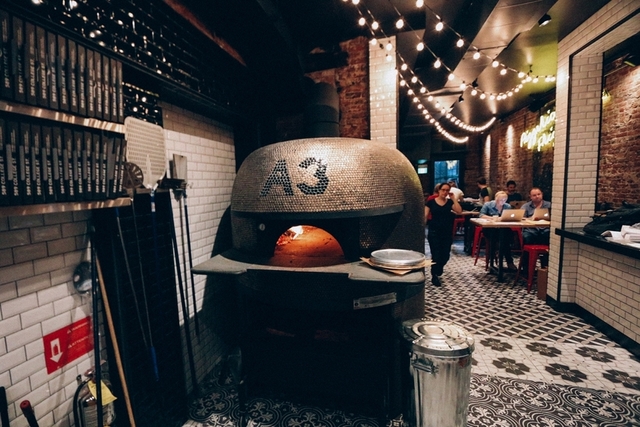 Once you walk past the ordering counter and the giant pizza oven, colourful red and yellow stools at wood tables catch your eye, with dangling lightbulbs and pizzeria e friggitoria written in neon lights on the wall. Rough exposed brick contrasts with the white subway tile near the entrance, meeting detailed mosaic tile on the floor. Mirrors on the wall open up the long space, eventually leading you to a patio in the back which is open in the summer. The space was designed by Irfan Bukhari from Bukhari Design Inc., a Toronto-based  agency that has designed spaces for dozens of others across town. A3 is mostly a fast food, take-out spot, but there are at least 34 seats available for those who rather sit in. It took about 6 minutes between ordering and receiving food at the table. 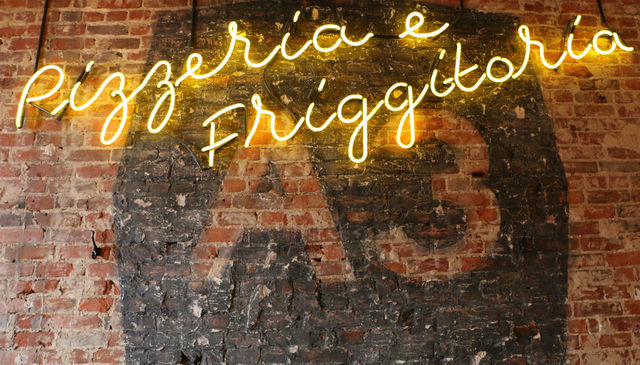 The drink selection at A3 is straight forward: beer and wine. On tap they had Peroni, and Capo from Flying Monkeys, a brewery based in downtown Barrie north of Toronto. They also serve Negroni cocktails, a drink made with gin, vermouth, and Campari. If that doesn't pique your interest, because food at A3 is brought to your table in less than 10 minutes, it isn't out of the question to have a quick bite and then go to one of the many bars sprinkled along College Street. A3 Napoli has even partnered with UberEats, so you can get a fresh pie delivered right to you, wherever you may be. Toronto Life magazine placed A3 Napoli at number 18 of best new restaurants in Toronto, blogTO named it in the top 10 pizzas of that year, and the Globe and Mail called A3 Napoli "superb" and "poised to dramatically change the city's pizza game".