A trellis leads the way through gardens of green, white, and red that take you to the cottage-like building, quaint on the outside but exquisite as you enter. Auberge du Pommier is a fine dining French restaurant with a seasonal menu that boasts modern cuisine and a 500 label wine selection. It's in North York on York Mills Road, and is managed by Oliver & Bonacini. 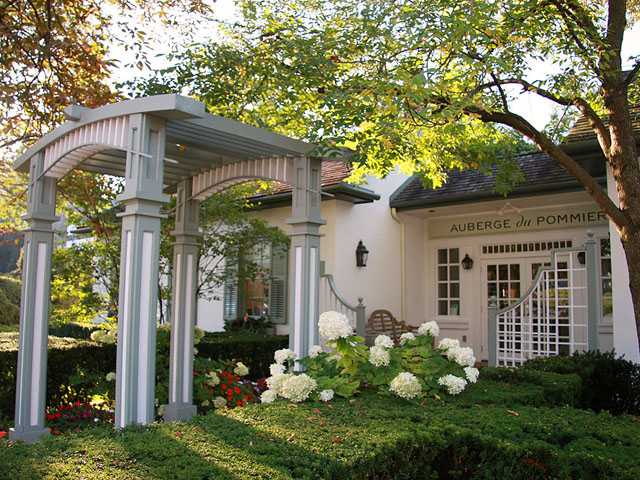 Formed as a partnership in 1993 between Peter Oliver and Michael Bonacini, the Oliver & Bonacini restaurants are known as some of the best in Toronto. Among them are Bannock, Luma at the TIFF Lightbox, Jump, and Canoe, which sits atop the TD Bank Tower and is well-known across Canada for its high quality dishes. When they got started, Oliver was a restaurateur and Bonacini a chef from South Wales. Now, their names stand for restaurants you can count on for impeccable dishes, great service, and a welcoming atmosphere.

With Summerlicious taking place in Toronto right now until July 26th, which offers special prix fixe menus at 210 restaurants across the city, I knew it would be a fantastic opportunity to pay Auberge du Pommier a visit. Their three-course Summerlicious menus are $28 for lunch and $45 for dinner, which is incredible value for a restaurant of this quality. 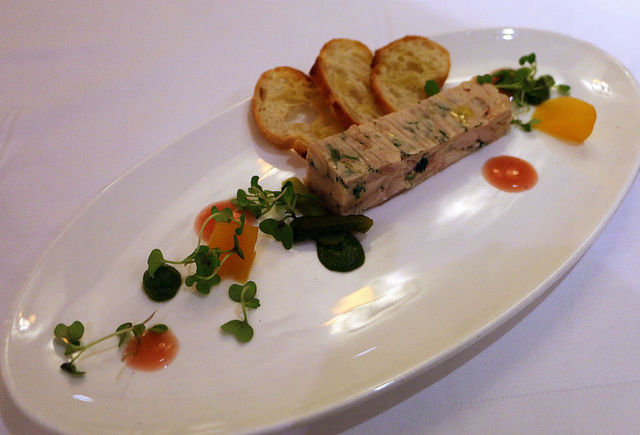 The lunch menu consists of your choice of appetizer, main, and dessert. For appetizer, you have the option of a baby green salad, chilled Ontario tomato soup or, what I chose to try, the chicken terrine served with preserved peach, vegetable marmalade, and droplets of sauce verte. A terrine is a French dish, similar to a pâté, served cold. As an appetizer it was enjoyable: slices of the terrine were easily dipped in the sporadic droplets of sauces and slices of croquette. Every dish was presented beautifully.

Mains were generous for a Summerlicious menu—they offered roasted organic chicken breast with vegetables and pommes fourchette, a pork filet, herb-poached shellfish with roasted grapes, or a ricotta ravioli with artichoke and white wine broth. I chose the filet de porc, a mustard-glazed pork loin with summer vegetable ratatouille, basil, and fingerling potatoes. It was dryer than I would have liked, but with the freshness of the ratatouille, the dish was composed well. 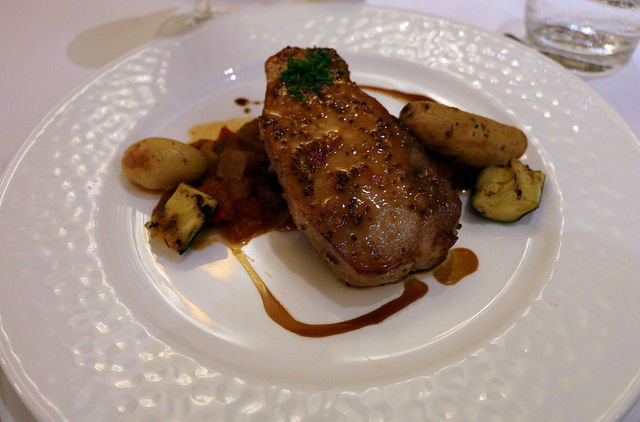 Oddly enough, dessert was my favourite dish of the day: a tasting of Ontario cheeses, fennel pollen, and local honey. Cheese is something Ontario does amazingly well, and it's a great way to leave your palate after a multi-course meal. I thought that the selection of cheeses was well thought out, with one creamier than the other. I selected it over a chilled honeydew soup with cantaloupe, watermelon, mint granite, and herbs, as well as the mille-feuille, a traditional French pastry also known as a Napolean. I was quite happy with my choice.

The dinner menu doesn't stray much from their lunch. It replaces the pork with a beef filet, and the shellfish with a pan-seared sea bream.

To drink, in addition to the over 500 wines on their list they have house cocktails. Try the Mayan Mule with Mezcal Jaral de Berrio, ginger beer, Xocolatl bitters or the Spiced Cherry Old Fashioned with spice box whisky, Heering cherry liqueur, and spiced chocolate bitters ($14 each). On summer afternoons between 2pm and 6pm, the Auberge also has a special terrace menu to enjoy chilled Perrier-Jouët Champagne and dishes such as steak tartare, French oysters, and a selection of cheese. 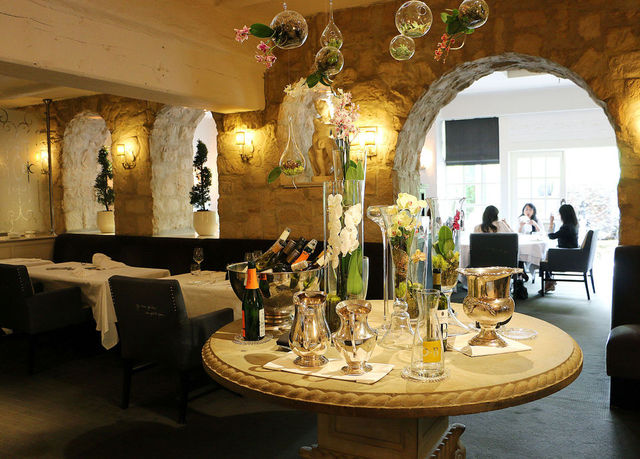 The service was extraordinary, as has come to be expected from Oliver & Bonacini restaurants. The servers pay the utmost respect and attention to detail. Food was quick to the table, and drinks were always being refilled, although the entire experience is not a short one: expect to spend about two hours dining and enjoying your company.

Auberge du Pommier is often used as a place for wedding photos due to the picturesque decor. The French cottage-inspired look has flowers blooming all summer long, with french doors and windows all around. As you enter, the elegance is clear from the wine display to the cosy fireplaces. White tablecloths cover the tables and stone walls invite you inside, with lancet windows to peak through to other rooms. A centrepiece table decorates the middle of the great room, with orchids, silverware, and bottles of wine.

There's a reason why Auberge du Pommier is often boasted as one of the best picks for Summerlicious. A three-course lunch during Summerlicious is the same price as what one dish alone would normally cost, and I didn't notice any cutbacks to the quality of ingredients, service, and atmosphere that you would expect throughout the year. For me, this is what Summerlicious is all about: enjoying top restaurants you may not normally venture to, and indulging in everything that they have to offer. Bon appetite!

Haven’t tried yet, too afraid to be disappointed by these Cuisine Française 🙂 … I will