A rebranding of King Street West favourite Valdez, Baro restaurant opened up its doors three and a half months ago. It's named after the term "the Baro;" or neighbourhood, where traditional Latin culture and cuisine is reimagined with distinct modern flair and morphs into something entirely unique. This Baro serves up Latin American culinary delights prepared by Chef Steven Gonzalez and his colleagues.

A Top Chef Canada alumni, as well as having helmed the immensely popular Valdez, Gonzalez has been in the restaurant business for over 20 years, having prepared his wares in Spain, Hong Kong and Miami. 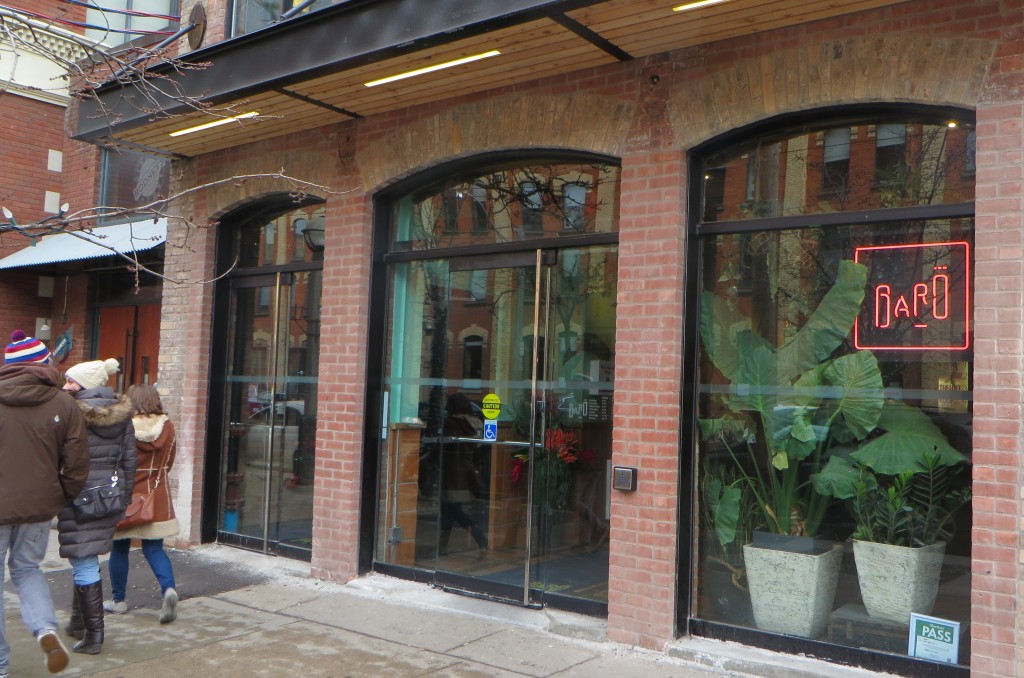 Opening just down the street from Valdez, Baro now occupies 485 King Street West, at the foot of Brant Street. The architecturally impressive building dates back to 1896 and was predominantly occupied by a textile warehouse. Over 13,000 square feet of space provide more than enough room for Baro restaurant on the main floor, a raw bar lounge on the second floor, a private event space on the third floor and a sprawling all-weather rooftop patio on the top floor.

Overall the feedback so far has been positive. Diana Chaverra, a local entrepreneur, is one such fan;

I tried Baro because I'm a huge fan of Chef Steve Gonzalez. I would often go to his previous restaurant Valdez because the food and atmosphere were great. So I had no doubt that Baro would be taken to another level and it was. The place is beautiful, the staff friendly and the food is spectacular.

They began offering a Latin-inspired brunch menu a few weeks ago, and from the looks of all the satisfied patrons enjoying their meals, it too will be a success. 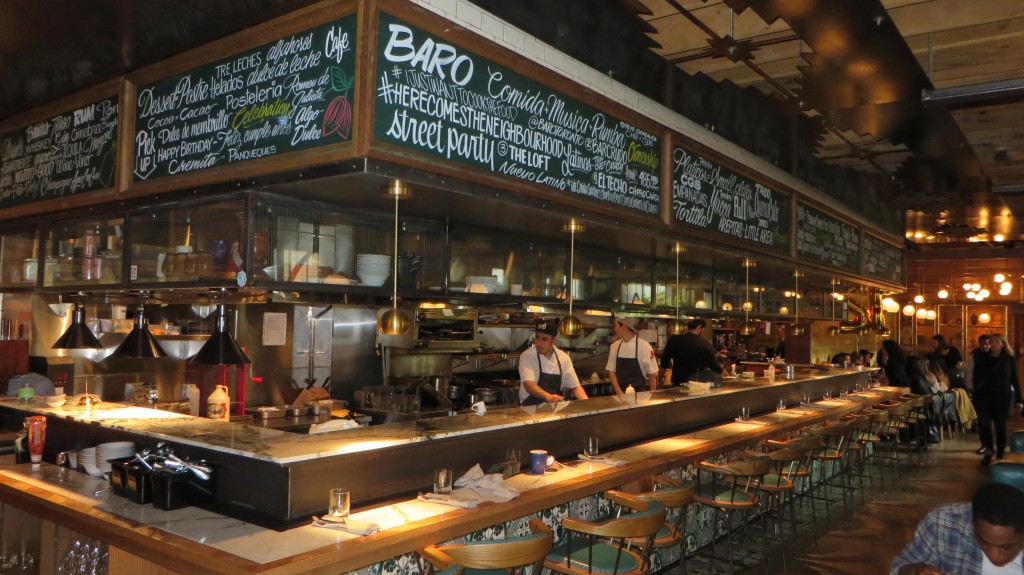 The antique feel to the outside brick and beam facade gives way to a distinctly Latin vibe and personality when you enter through the glass front doors. There is a gorgeous mural along one wall, while on the other side, the front desk area is replete with dark wood surfaces. Many leafy hanging plants add to the ambience, while the glass doors and abundance of windows allow in plenty of natural light. Entering a darkened wooden hallway/alleyway, you come out on the other side in the restaurant proper, bustling with patrons' activity, and servers carrying drinks and delicious looking and smelling meals to the various tables. 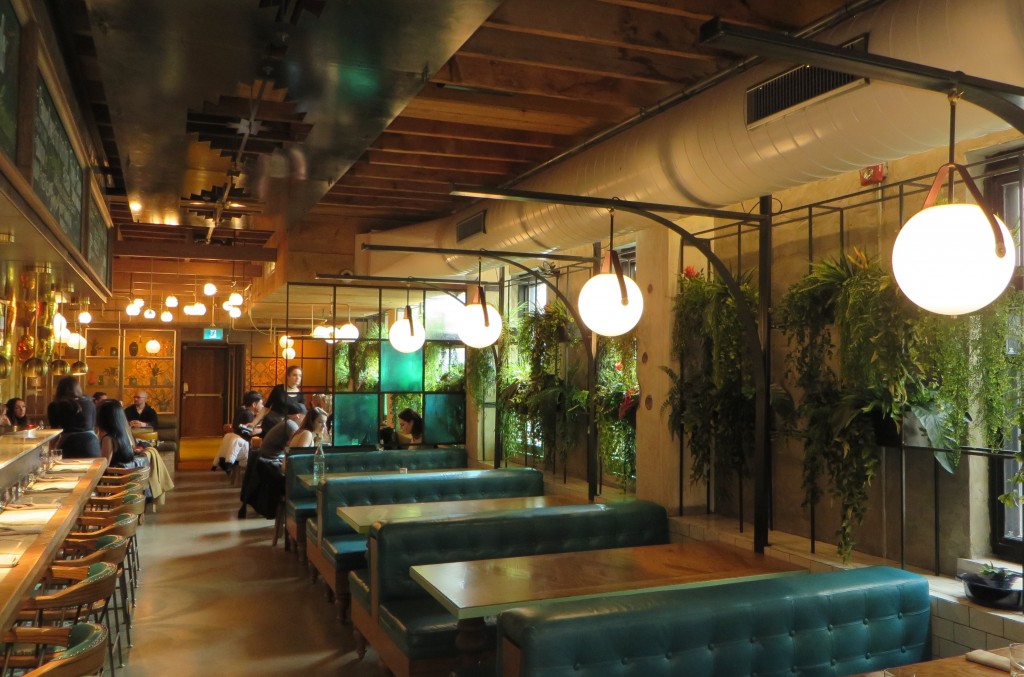 There is a bar on your left as you come in, featuring a myriad of spirits along the back wall. Further on, the open concept kitchen is surrounded by customers' seats or "hot seats," so you can see your meal being prepared. Chef Gonzalez and his team are obviously a well-oiled machine and prepare the dishes with precision but also a palpable alegria de vivir (joie de vivre). I was seated at one of these "hot seats" and truly enjoyed watching the food being prepared to order.

The bar area also has seating, or you can sit at one of the tables or booths along the west side of the place. Mexican floor tiles, dark wood tables with colourful tile inlays and chairs, antique mirrors on pivots, a brass hanging ceiling sculpture and plentiful hanging plants along the walls, as well as original art inspired by Latin culture from local Toronto artists add to the Latin American vibe.

The atmosphere is lively and jovial, with everyone from the hostess to my server Jamie, treating me like a long lost friend. The constant background sounds of animated conversation and laughter add to this welcoming and comfortable atmosphere, while the distinctly Latin decor might actually fool you into thinking you were actually down south in a baro in that part of the world.

The brunch menu was quite eclectic, offering up everything from Nick's Salad (organic greens, cucumber, tomato, avocado, yuzu vin and walnuts) and a Parfait (Baro granola, yogurt, passionfruit, dried fruit, honey, pears and banana), to heartier fare like the Eggs Benny Blanco (poached eggs, yuca rosti, tobasco hollandaise and mustard greens) and the Ranchero (eggs, rice and beans, tostada, crema, bacon, maduro, chorizo, morcilla, guacamole and salsa). Prices ranged from $7 for the Empanadas (cornmeal, beef, potato, peas and aji) to the Machatero for $24. They also have a host of side options available including rice and beans, Baro bacon, Valdez chorizo, chicharron, toast and honey butter, a side salad and 2 eggs. These sides will set you back from $4 to $12.

For drinks offered, prices ranged from $2.50 for a coffee/tea, to $15 for the Baro Spur cocktail.

I started off my meal with the Cubano, which had duck ham and confit, pickles, mustard, swiss cheese and came on Cuban bread. The flavours blended together quite nicely, and it almost reminded me a little of a popular Italian appetizer called Bruschetta. Quite simply delectable and could be a satisfying bite in and of itself when you're not so hungry and just want a snack with your drink. 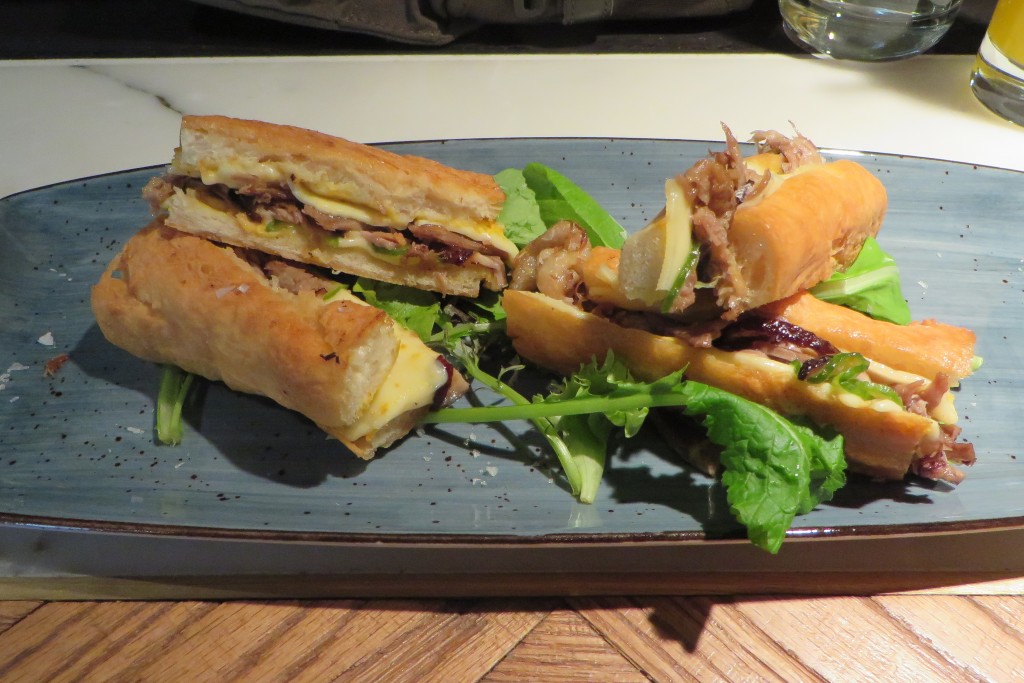 For my main course, I elected to try the Machataro, which as I was later told by my server Jamie, was newly offered on the menu that weekend. Lucky me! It was certainly as delicious as it looked. A Latin American twist on the good old Steak and Eggs, it featured flank steak, eggs, duck and potato hash and chimichurri (finely-chopped parsley, minced garlic, vegetable oil, oregano and white vinegar, a sauce indigenous to Argentina). I have always loved my Steak and Eggs, to my midsection's chagrin, but this iteration of it by Baro brings it to a whole new level. My only criticism would be that the steak was a little tough to chew, but nonetheless, it was quite flavourful and delicious! 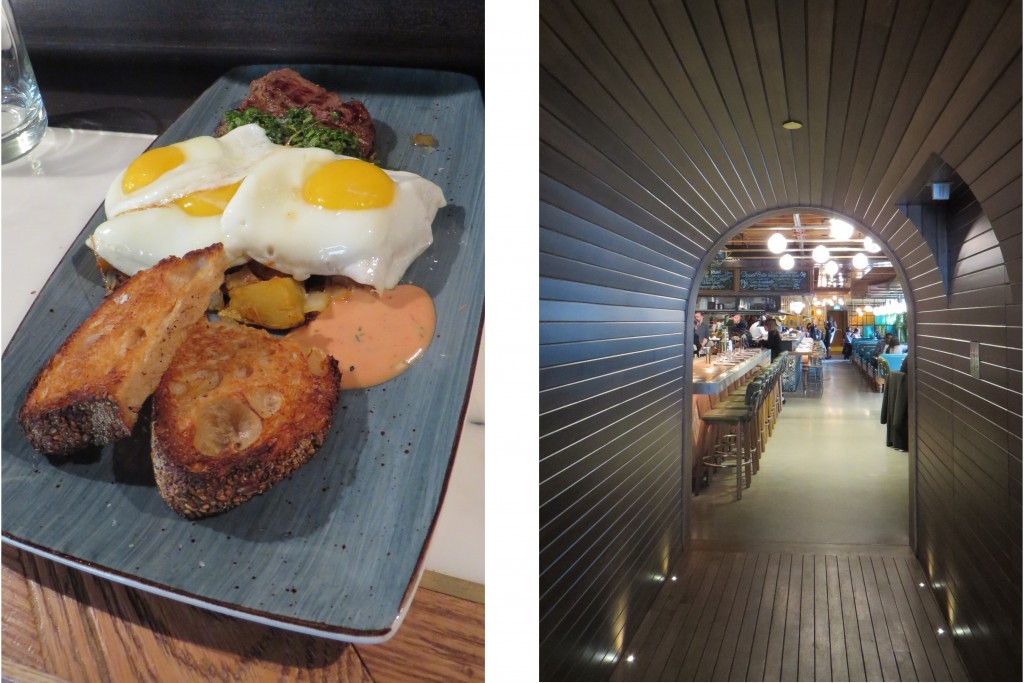 There was no dessert offered on the brunch menu to speak of, and I'm sure I wouldn't have been able to find the room after the Cubano and the Machataro were eaten anyway.

The options from the Drink menu are numerous and should satisfy the most adventurous soul. 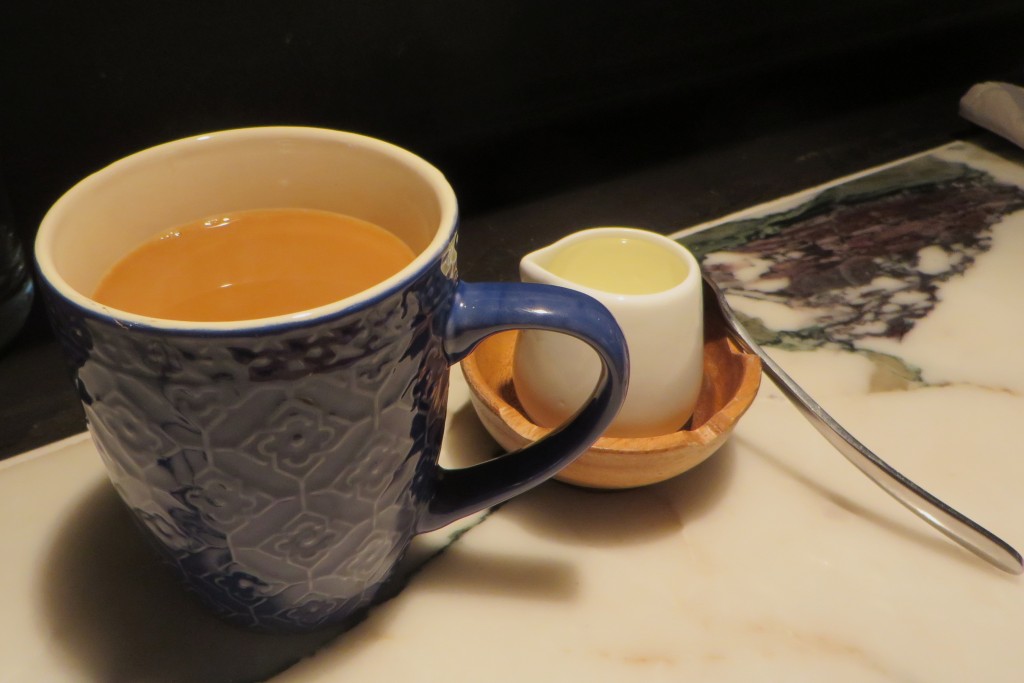 Since I was driving, I eschewed an alcoholic drink and I had the freshly squeezed orange juice (they also have freshly squeezed orange and mango and grapefruit juices and strawberry lemonade) for $6, and finished off my meal with a cup of coffee for $2.50. Both were delicious and a great accompaniment to my meal. Ice cold water was also provided and filled up regularly. 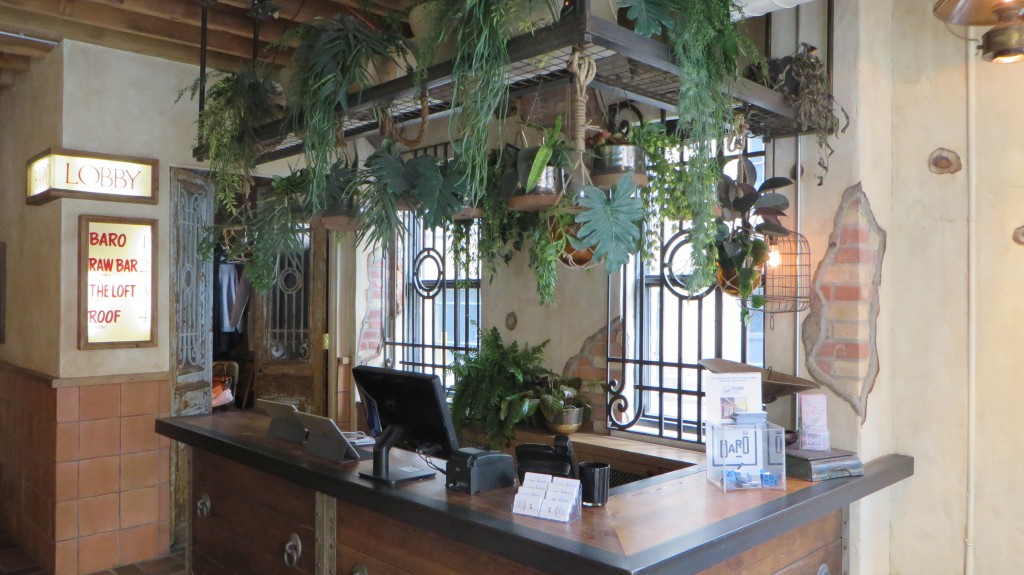 The service was excellent, from the time I arrived with the hostess greeting me enthusiastically and leading me to my table (they also have coat check available), to my server Jamie, who provided friendly service and was quite knowledgeable about the menu items on offer. The service could have been a little quicker, especially with my orange juice and coffee, which took about 5 minutes plus to reach me, but my food items arrived in decent time.

After enjoying my Cubano and my Machataro, I was quite full, but in a good way. I felt satisfied but not heavy or bloated in the least. Chef Gonzalez was once quoted as saying;

We promise to deliver a food experience that is fresh, seasonal rich in Latin culture and always made from scratch.

From my experience at Baro recently trying out their brunch menu, they've succeeded admirably. Although the service was a touch slow, and the steak in my Machataro was a little chewy, it was all very tasty and pleasantly displayed on the plate. I'll certainly be back soon. Buen Apetito!

Baro is open from 5 pm to midnight from Sunday to Tuesday, 5 pm to 2 am from Wednesday to Saturday, and opens up for Brunch on the weekend from 11 am to 3 pm. Reservations are recommended, but some space is always set aside for walk-ins.