Opened up in Summer of 2010, Beast restaurant has snorted and charged full bore to success in the years since, under the watchful eye of founder and head chef Scott Vivian and his wife Rachelle, a pastry chef also famous for Dough Toronto doughnuts.

In a space formerly occupied by Amuse-Bouche and Lotus at 96 Tecumseth Street (on Tecumseth between Adelaide St. West and King St. West), Beast serves hearty comfort food in a homey setting. 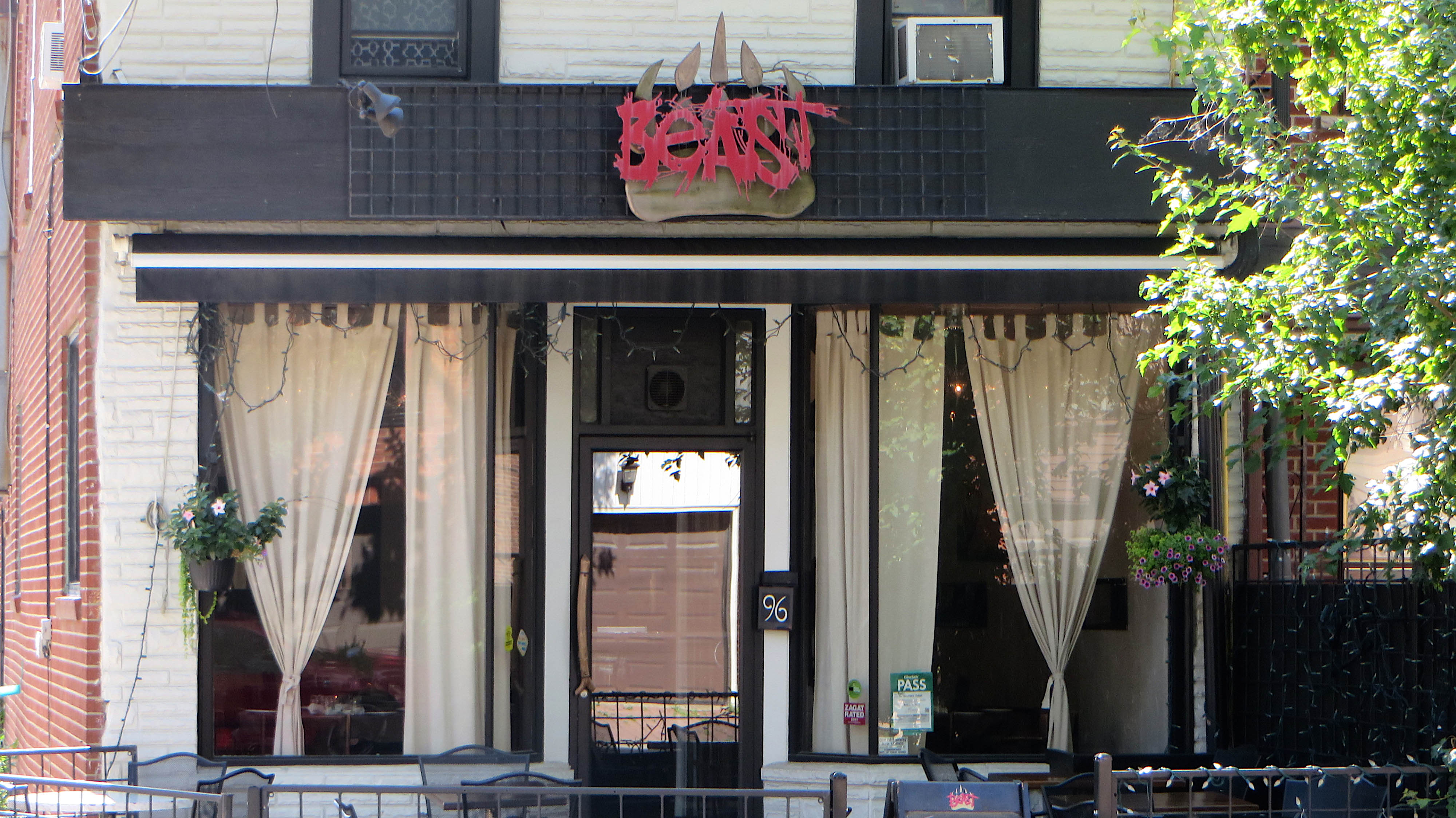 Scott came from an Italian family that loved to cook. He honed his skills in his teens, solidifying them doing a two year apprenticeship with a chef in Colorado. Stints in Atlanta, Montreal, California and at several Toronto restaurants followed, including the aforementioned Amuse-Bouche. He was head chef and part owner of Wine Bar with Rachelle (the other owner being Jaime Kennedy) when the opportunity to open up a restaurant came about. He is a driving force behind the Group of Seven chefs in Toronto, a collective of local culinary wizards who want to create unique pop-up dining experiences around the city.

Vivian was once quoted as saying that meat was a very important part of cooking. In fact, pork is his favourite meat, and he tries to add it to every dish he can. The menu at Beast certainly validates that assertion, and meat lovers are well served here choosing from the regular menu.

For those patrons who can't get enough meat in a typical meal at Beast, whole animal dinners are available upon request. The customer picks the animal, reserves the date (with at least a week's notice) and Beast will prepare a six course meal using all of the "beast".  For $80 per person your choices of animal are lamb, goat, duck, chicken, squab, pig or wild boar. For another $20, you can also select cow, venison, elk, water buffalo or bison. Whatever animal is selected is procured from local butchers. One animal per table is permitted and only one whole animal dinner is served per night. Guests are advised to set aside three hours for the experience. For an additional charge, wine pairings are available. HST, 18% gratuity and drinks are extra.

Anthony says they have a few of these a month:

We always tell people to bring their adventurous sides, it's a great learning experience about what's edible [on any given animal]. It's all great stuff.

Dark wood floors and tables and chairs give this place a homey yet polished look. The dark wood is offset by white plaster walls and several mirrors, which serve to brighten the room and make it appear larger than it is. Two large windows and a glass door at the front let in plenty of natural light, while a few ceiling chandeliers also cast their soft glow. It is eclectically decorated with a couple of unusual paintings on each side wall, and a stretched out animal skin mounted on the wall beside the bar.

A small patio provides an outdoor dining alternative in nice weather, allowing you to enjoy your food and drink while watching the passersby on the mature tree laden Tecumseth Street. 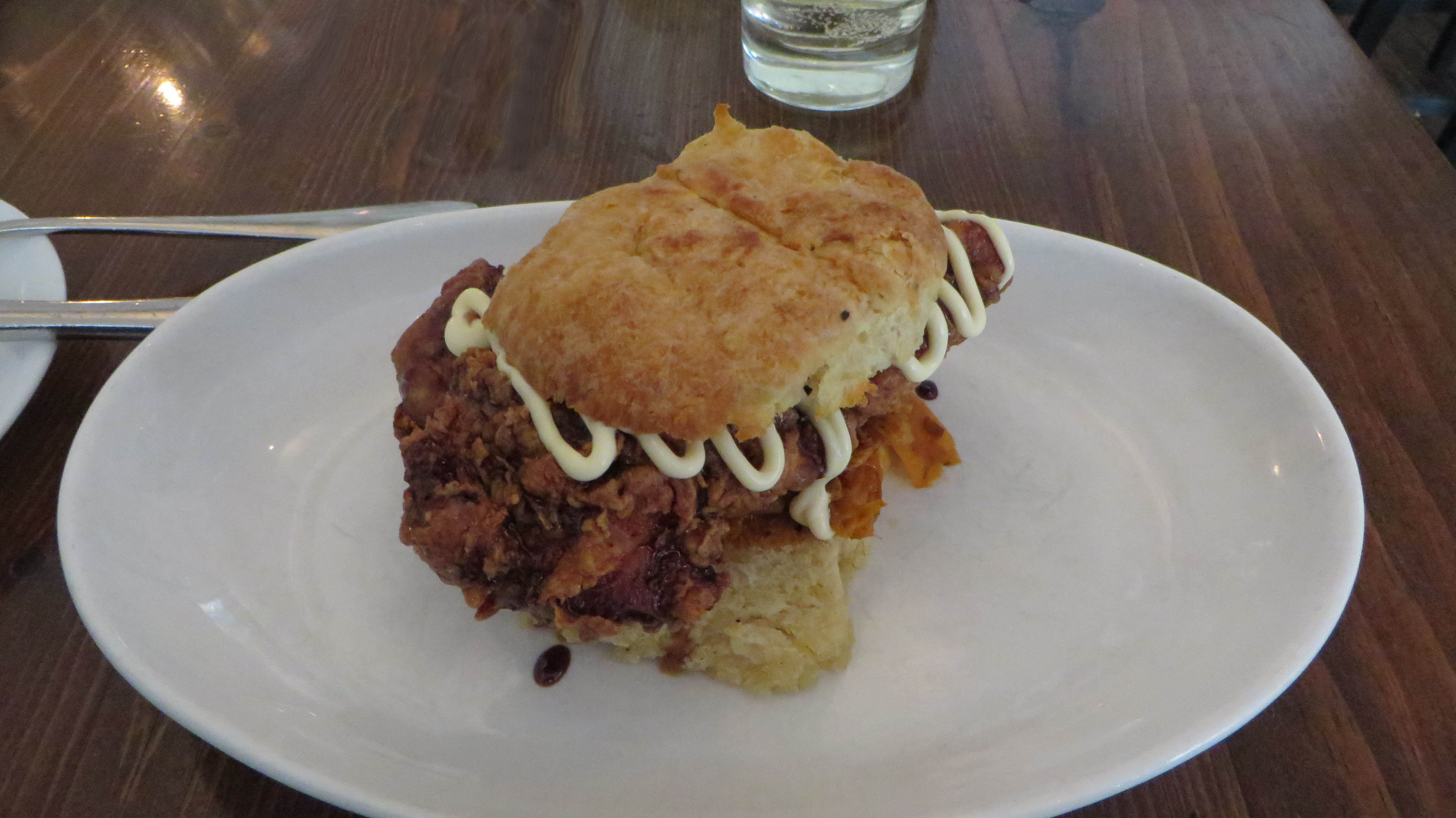 The atmosphere was relaxed and friendly, much of this attributable to my server Anthony, who was affable, knowledgeable about the menu and a genuinely cool person to chat with about the food and drink offerings and the restaurant in general. The dark woods and light walls provided a calming contrast, and the artwork on the walls provide great seeds of conversation.

The open door and panoramic windows at the front made the patio almost seem like the inside and outside were all one room, letting the sun and joie vivre of Tecumseth Street in and the cool and homey environs inside out.

The appetizers range from $4 for the house pickles to $6 for the marinated olives, to $15 for the venison tartare and topping out at $17 for Henry's majestic return (an Ontario cow's milk cheese) while the main course (the biscuit sandwiches) are $13-14 each. The only desert, the toffee pudding, comes in at $10.

For their brunch menu, they serve up maple bacon donuts (or the flavour of the day) for $3 a piece, and topping out at the Ace Hill Breakfast for $24 (if you want meat incorporated from the whole hog). The beast biscuit sandwiches, the toffee pudding and a multitude of sides are also available.

A Happy Hour menu from 5pm to 7pm is also on offer, where varied fare like crispy pigs ears ($5) or radish and boquerones ($6) whet your appetite, and $5 drinks like sake, wine, or craft beer are on tap to wash it all down after a long day at work.

For the appetizer, I tried two dishes; the house pickles and the beef cheek. For $4, the house pickles consisted of marinated beets, celery and sunchoke pickles, the latter described by my server as southern style. The beef cheek, for $15, was cooked to perfection, and came with jicama, herbs, fish sauce, peach, and sunflower seeds. The latter ingredients provided a delicious backdrop to the beef cheek and were also pleasing to the eye on the plate.

Other selections include Henry's majestic return, with golden raisins, pecans, sherry and apple ($17), squid, beef tendon, spicy fermented black bean and bean sprouts ($13), wedge salad, blue cheese, bacon, tomato, everything bagel spice ($11), oysters on the half shell ($3 each, a dozen for $30) and several others.

For my main course, on Anthony's advice, I had the Bruce Leroy biscuit sandwich, which was named either after the UFC fighter or the main character in the cult classic film The Last Dragon, and as you probably figured I'd say, it delivered a knockout kick. All sandwiches come with fried chicken thigh, but from there they differ significantly. In my Bruce Leroy sandwich, the fried chicken thigh was accompanied by the house kimchi, kecap manis (Indonesian soy sauce), and kewpie mayo.

Since I was driving, I had the non-alcoholic cider, from Spirit Tree Estate Cidery in Caledon Ontario. It was $5 and very refreshing. So much so that I had two of them. Other non-alcoholic choices include sparkling water ($2-4), pop ($2), tea and coffee ($4).

All bottles of wine are half price very Wednesday from 5pm to close. A full list of their liquid offerings can be viewed at their site.

The service was good, but a little slow at times. Otherwise, my server Anthony was very friendly, knowledgeable about the menu, helpful with any queries I had about the restaurant and its history, and also went above and beyond to get me a Beast T-shirt in the size I wanted (a gift for a friend).

After my meal, I felt stuffed to the gills, but in a good and healthy way. Everything was expertly prepared by Chef de cuisine Jason Poon, with the exception of the toffee pudding by Rachelle of course, and I left feeling quite satiated, energetic and raring to go... like a beast!

Beast restaurant is open from 5pm to 10pm Wednesday to Saturday, and is open for Brunch 10am to 3pm on weekends and holiday Mondays. They're closed on Monday and Tuesday. They don't take reservations for Brunch (it's first come, first served) but reservations for dinner are recommended. Gift certificates can be bought at the restaurant for that special someone. Catering is also available. You can reach them at thebeastrestaurant.com, info@thebeastrestaurant.com or at 647-352-6000. They are also on Facebook and Twitter. 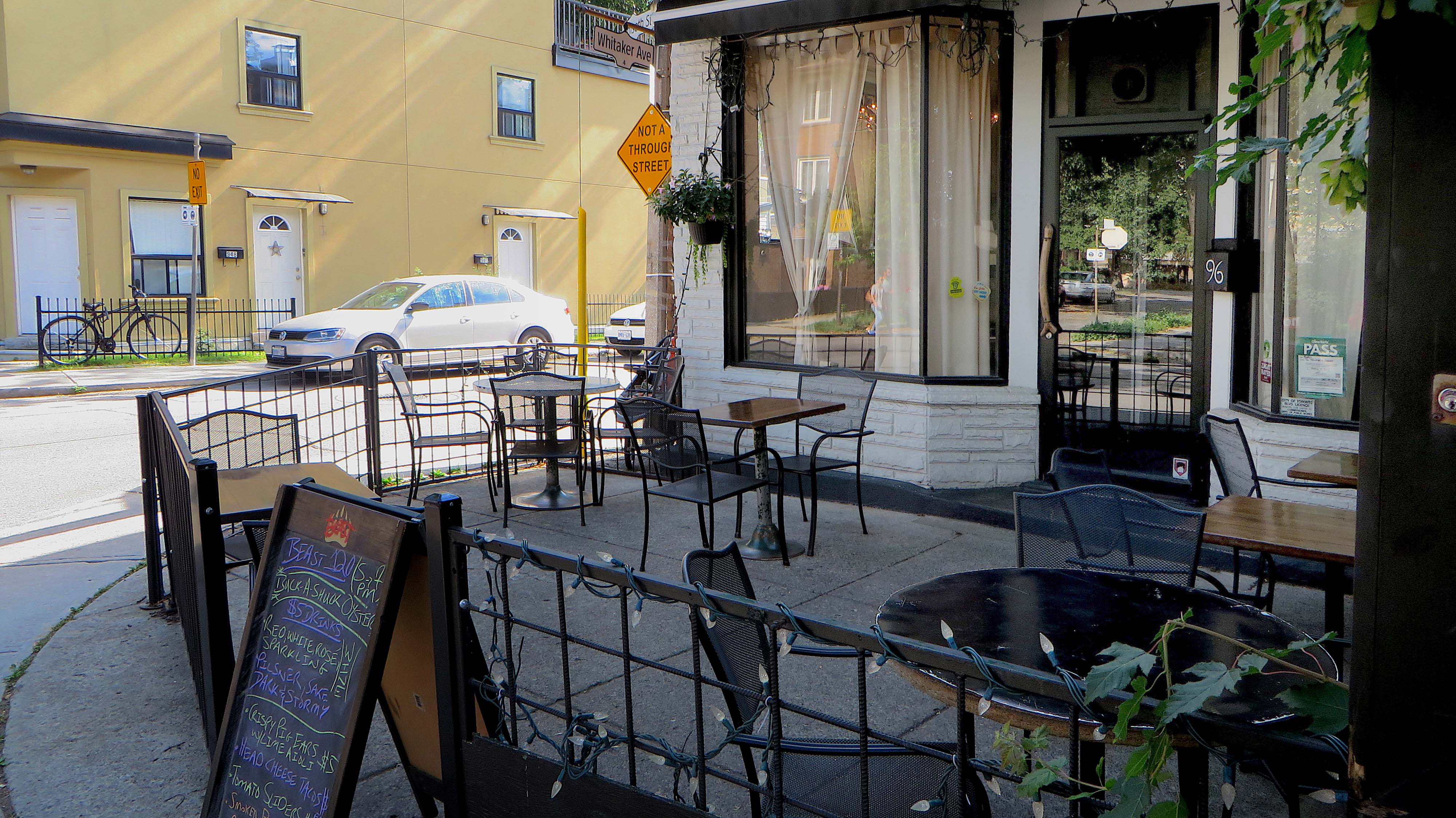