Brothers Food and Wine is a new restaurant near the intersection of Bay and Bloor Streets in downtown Toronto. Located at 1240 Bay Street, just above the Bay subway station, they offer fresh espresso drinks to morning weary passersby from 8 am to 11 am. Post 11 am, they serve an eclectic mix of locally sourced Mediterranean-inspired dishes for lunch and dinner that change on a frequent basis to reflect availability. The space was formerly occupied by Café Iris, a Chinese restaurant that specialized in sandwiches and an all-day breakfast. 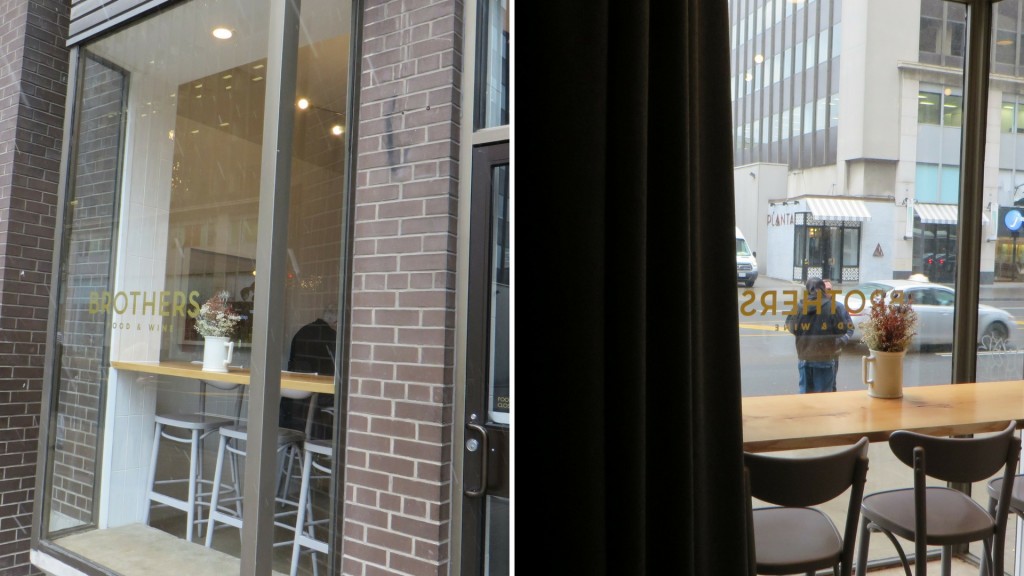 The owners of Brothers are Chris White and chef Jonathan Nicolau, who met when they worked together years back at Queen West's Terroni. They've been best friends since they were 16 years old, but according to White, "Brothers" looked better on the window than "Best friends." Combined, they have many years of customer service and culinary experience under their belts. They are joined by wine sommelier Courtney Stebbings, formerly of Lyle's and the River Café in London. Open since October 2016, their venture has been bustling ever since.

"It's kind of hitting in its own way," explains White, also my server that day." We've had some big crowds, it's been kind of word of mouth the first four months, which was nice. We've also had a review or two, which has helped spur traffic too, but it was busy either way."

Using the advice from professional decorator friends and White's collection of World of Interiors magazines, the interior is light years from when it was Cafe Iris, and is neat and functional as well as being aesthetically pleasing. Upon entering the establishment, you're facing a large grey curtain, which acts as a physical and acoustic barrier to the hubbub from Bay street outside, keeps the cold air out and creates a pleasant air of mystery to the premises. A large bar greets you as you enter, gleaming with white tiles, a mirror, and the impressive stainless steel espresso machine sitting at one end. A large picture window at the front lets in ample natural light, while this is supplemented by several hanging parachute lighting fixtures. Frosted glass windows opposite the bar brighten up the room even further, while a pleasant and homey touch is a wooden coat rack hanging on the wall just inside the door to accommodate their customers' coats and hats.

Beyond the bar area, a large narrow room stretches back toward the kitchen area and washrooms. This back area has six tables and chairs, with a booth seating area along the wall. A large framed photo of a ploughed wheat field dominates the back wall, perhaps symbolic of the locally sourced food they create their dishes with. Large globular chandeliers light up this dining space and patrons can look across into the kitchen to see the chefs preparing their food and smell the enticing evidence of the labours of Nicolau and his sous chefs.

White walls, tiling, ample natural and electric light and concrete floors create a bright airy space that feels larger than it actually is. The occasional rumbling of the subway from below is noticeable but not distractingly so.  The alluring smells from the kitchen and the friendly demeanour of both Chris and Jon, who call me brother a few times and the genuine merriment of my fellow patrons as they enjoy their food and drinks makes you feel right at home. 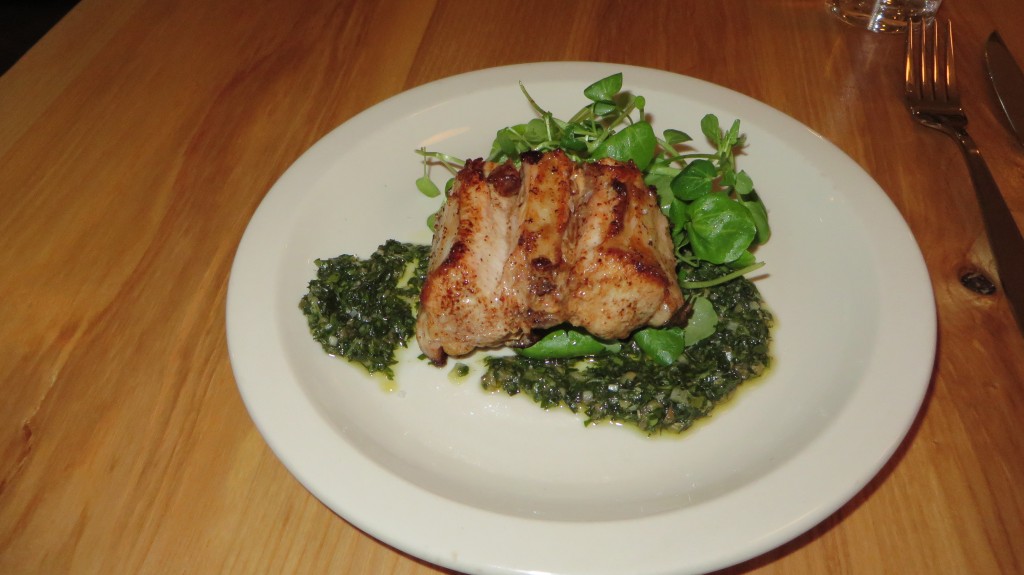 Brothers offers a full slate of appetizers, main courses, and two desserts. Prices range from $3.50 for a Coke to nearly $30 for some of their main courses. As stated previously, the menu changes regularly so you're unlikely to have the same meal there twice.

I tried the Kofta with yoghurt, mushrooms and olives for $8. Kofta is a meatball dish consisting of minced meat mixed with onions and spices, and is popular in the Mediterranean region, central and south Asia and the Middle East. It was absolutely mouth watering and could be a meal in and of itself. 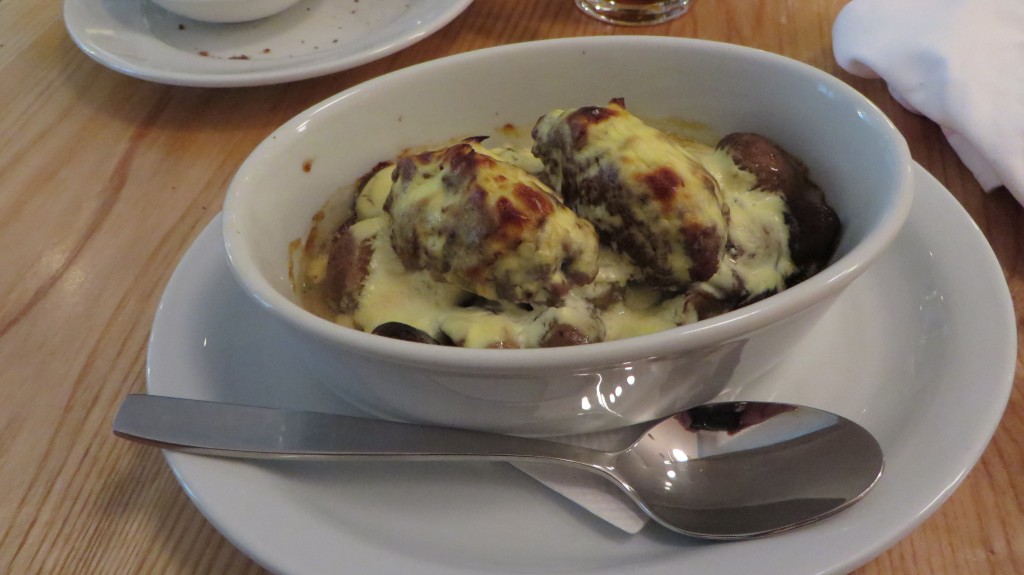 I had the Rabbit saddle, which is the cut of meat that runs from the rib cage to the hind legs. It was served with watercress and a lovely green sauce which was made with capers, anchovies, garlic, tarragon mint parsley and red wine vinegar. A favourite of chef Jon, he enthuses about the cut of meat as he delivers it to my table and details how it was prepared and how much better the meat is when left on the bone, as it adds flavour and allows the meat to retain more moisture. It was an educational discourse, and indeed  Chef Nicolau was right.  The rabbit was absolutely delicious and well worth the $21. You can add on lemon potatoes or greens for an additional $9, which I decided not to do, as I was already on my way to being full from the delectable Kofta appetizer.

I had the citrus semolina yoghurt cake with sea buckthorn berries and whipped cream. Semolina yoghurt cake goes by various names, basbousa, samali, harisi, rava and revani. Some use milk, while others, like this fine example, use yoghurt. The buckthorn berries, which are a little tart, provide a pleasing counterpoint to the relative sweetness of the cake and whipped cream. A great end to my meal for $9. They also offer a good selection of cheeses as an alternative dessert option for the same price.

Brothers offers up a full range of non-alcoholic drinks, and a good wine list curated by Stebbings that fall within the $10-$18 range and place emphasis upon biodynamic and natural producers. Local craft beer options are also represented well. They also provide a myriad of espresso drinks like cappuccinos and lattes to patrons upon request. Since I was driving, I opted to have a Coke;

"Nothing wrong with that," Chris said with a hearty chuckle, "I feel like one myself." The soda arrived in a small glass bottle accompanied with an ice-filled glass, which was a nice touch. With my yoghurt cake at the end of the meal, being the avid coffee fan that I am, I had an Americano (espresso with hot water), which was proficiently drawn as a perfect pairing to the cake.

I was served by both Chris and Jon, and the service was excellent.  As you would expect from the owners, they were quite knowledgeable about their food and drink offerings.  For instance, I initially ordered a full helping of the Kofta, but at Chris' suggestion that it might be too filling, opted for the half portion. He was 100% correct on that one. Thanks Chris!

After my meal, I felt satiated and full,  but light and energetic not heavy and wanting to find a quiet place for a nap. Definitely, the hallmark of great wholesome food expertly prepared and courteously served. I will certainly make it a point to return there soon.

Brothers is open from 11 am to 11 pm Monday to Saturday and is closed on Sunday. It is recommended you contact them for a reservation, as they can seat only about 30 people at any given time. You can phone them at 416-804-6066 or reach out online at www.brotherstoronto.com