An authentic Mexican street food experience has been available since late last year at 504 Adelaide Street West (at the northwest corner of Adelaide and Portland Street) called Campechano Taqueria. Having lived and worked in Mexico for years, owners Daniel Roe and Javier Flores are well versed in what makes a great taco establishment, and with their partner Raena Fisher have brought that knowledge and experience to fruition here in King West. 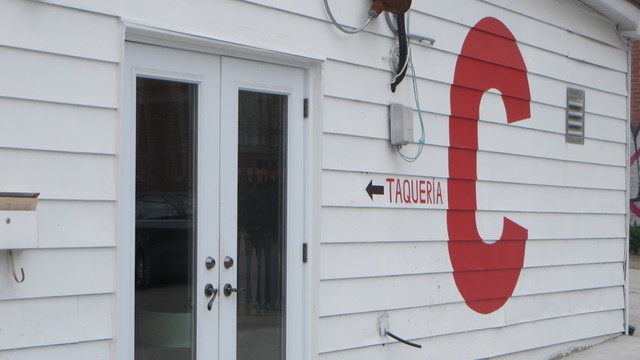 Meaning "no fuss" in Spanish, Campechano's unobtrusive yet neat exterior blends white aluminum siding with their name spelled out on the front sign neatly in red lettering. A set number of delectable and gluten-free Mexican dishes along with plentiful drink options and a no-frills style keep the place true to that sentiment. As Daniel Roe said in NOW magazine shortly after Campechano opened,

"We're not trying to come up with anything new; it's just what it would be like in Mexico."

The crowd outside Campechano waiting for it to open up is a testament to the fervent and loyal following they have amassed in a relatively short time. Daniel Roe is hard at work with his sous chefs preparing for the incoming guests' orders as they come in. The hostess and waitress named Nina greets each person that comes in like a long lost friend, chatting amiably with them. After taking them to their table, she provides the menu and pours them their first glass of ice water. 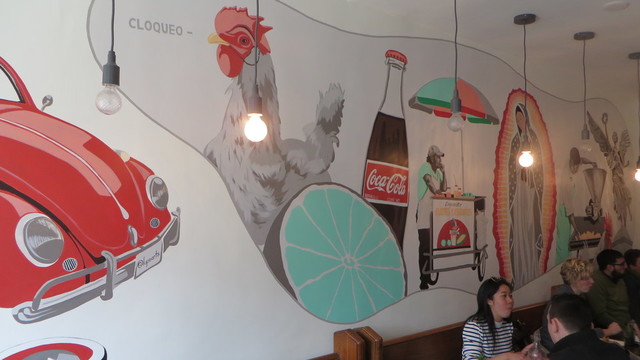 The walls inside Campechano feature colourful murals of Mexican street scenes by Toronto artist Luke Pollard. What's not to love about the fact that his artistry features the original Volkswagen Beetle, a fixture on Mexican roadways? It is a welcome surprise, and makes me feel right at home.

The wooden tables and benches, and hard yet comfortable classroom-style chairs, provide seating for around 40 people at the front and in the room at the back. The white walls, hanging single bulb chandeliers and ample natural light from the large front windows provide a bright and airy dining experience. An open kitchen allows guests to see and hear their food being prepared, in concert with its enticing aromas. A nice blend of Latin music plays in the background, but is not overbearing and is conducive to conversation. According to the owners, they plan on having a new patio open this summer, so that will provide even more seating and ambience to a restaurant not lacking in either. 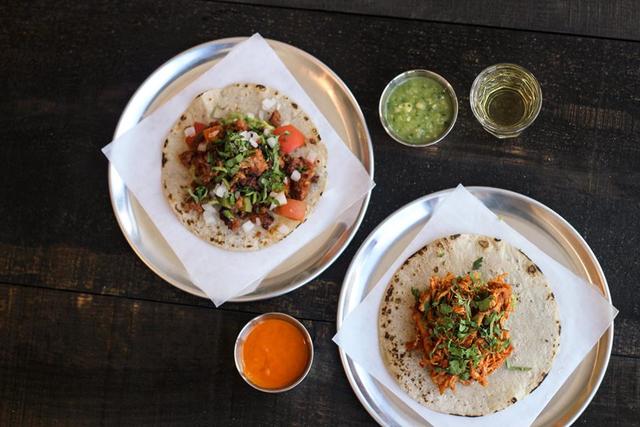 Campechano Taqueria offers up a select range of food and drink items that you might find in a bona fide taqueria down in Mexico. Mexican cuisine generally is a blending of indigenous and later Spanish and African influences. It's an important facet of their culture, social structure and popular traditions. So much so that UNESCO even inscribed traditional Mexican cuisine on the Representative List of the Intangible Cultural Heritage of Humanity in 2010. 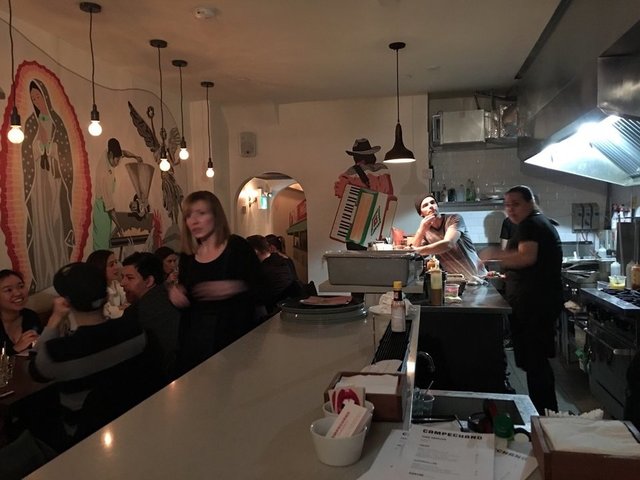 Campechano serves up a hearty dose of this Mexican culture, such as guacamole (avocado dip with sea salt and lime) with a side of corn chips, and ceviche (a mix of seabass, shrimp and chipotle) with corn chips on the side, as appetizers. Their menu changes on a regular basis, and at the time I visited the place, there were six tacos and four quesadillas to choose from, including a couple of vegetarian options. The quesadillas are made with mozzarella and gouda. These two were chosen due to their resemblance to Oaxaca cheese, a white semi-hard Mexican cheese, which was derived from mozzarella cheese the Spanish brought over when they occupied Mexico from 1521 to 1810.

The meat options for your tacos or quesadillas include steak, shrimp, fish, pork, lamb and chicken. Currently almost everything on their menu is gluten-free, except the Pescado taco, that has gluten in it as it is beer battered. Their most popular quesadilla is the choriqueso, with gouda, mozzarella and chorizo sausage. Customers also like their chicken taco, but the seabass taco and the campechano taco (with sausage and sirloin) also get rave reviews from their guests. The only desert they have on hand is their flan de queso, which is a custard made with feta, which gives it a thicker consistency, and drizzled liberally with caramel sauce. 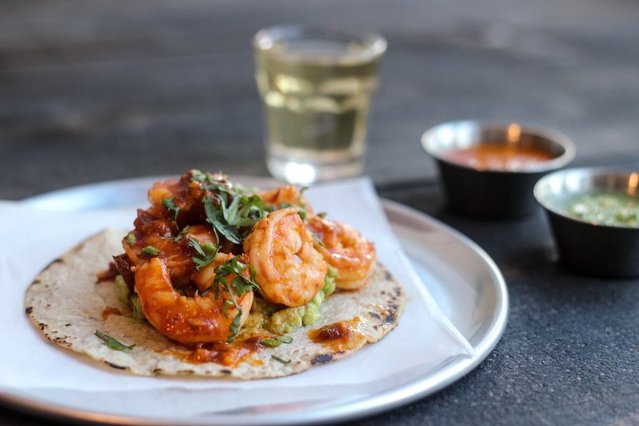 Their drink options include Mexican sodas (sweetened with sugar cane instead of the corn syrup typically found in our sodas), horchatas (a cinnamon/vanilla rice and milk drink), agua frescas, which include their signature agua de Jamaica (sugar and water mixed with a combination of various fruits, flowers, cereals and seeds) and alcoholic drinks like palomas (tequila and grapefruit flavoured Squirt soda), sangria, margaritas and Mexican beer.

Quite reasonably priced, the food at Campechano Taqueria ranges from $4 to $12, while drinks will set you back anywhere from $2.50 to $9. All told, my meal with the appetizer, the main course, the desert and the drink came to $25.14, not counting the gratuity.

To begin, I sample the guacamole ($7), which is fresh, quite liberally portioned and contains pomegranate seeds. It is served with corn chips and is a great starter course. 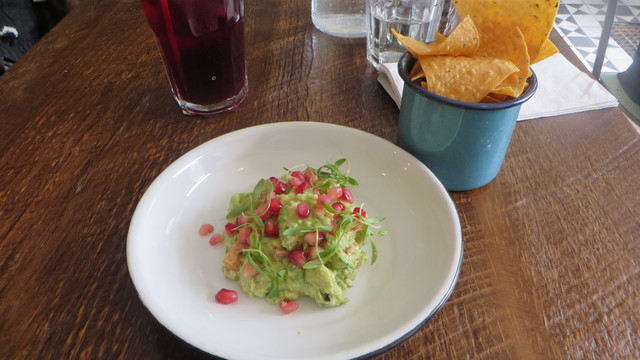 They're famous for their blue and white corn tortillas, made freshly in-house. Wanting to create an authentic Mexican taco experience from his days down south, fresh tortillas were the way to go for Mr. Roe. However, it was an arduous process. Importing the corn and requisite machinery directly from Mexico, he spent six months mastering the process. From the taste and quality of the tortillas, that was time well spent. To make enough for a day's service, the whole process takes about 90 minutes to two hours. I order up the bistec (steak) tacos ($9.50 for two), with sautéed steak, green peppers, onions and topped with a Morita chile sauce. The tortillas were fresh and light, and the fillings were cooked and spiced to perfection. I must say, they were muy sabroso!

I top it all off with the flan de queso ($4). It was sweet, melted in your mouth, and was just the right size. Denser than a normal flan, it is a cross between a flan and a panna cotta. What really matters was that is was delectable and did not disappoint. 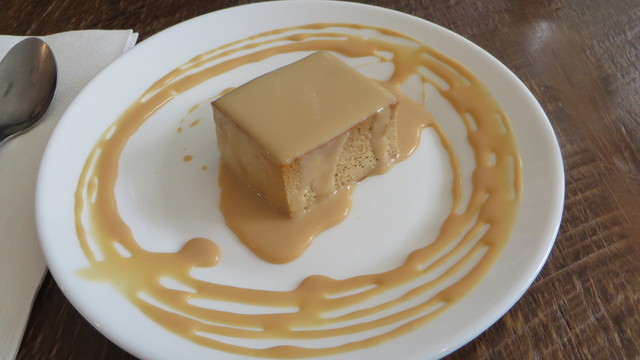 My only regret is that they didn't serve any coffee or tea to go with such a lovely dessert, but that's a small quibble. It was a fitting end to probably the most genuine Mexican meal you'll find outside our southernmost North American neighbour's borders.

I try a hibiscus flower infused tea drink called the agua de Jamaica, which is served on ice. It is sweet, but not overly so ($2.50). The Jamaica is a great choice for quenching one's thirst, and a fine accompaniment to my meal. There is also a large carafe of ice cold water available on the table, which I make good use of as the tacos have just enough spice to pique your thirst, but not too much.

The service at Campechano Taqueria was absolutely amazing. I called and booked a reservation, but walk-ins are welcome and you're reasonably sure to get a seat if you're there early enough. However, be forewarned that this taqueria is quite popular and fills up quickly with guests. My server, Nina, was friendly and knowledgeable about the menu, and offered up great suggestions as to what to try. My food and drinks came promptly and were cleared soon after I finished with them, despite it being busy with the downtown dinner crowd. Due to the fact that the fare is predominantly finger food, and can get a little messy, the moist toilette that arrived with the bill was especially appreciated. My server even wrote a heartfelt "thank you" on the bill, complete with a smiley face. I left with a great feeling, as if I had just had a meal with family and/or good friends. 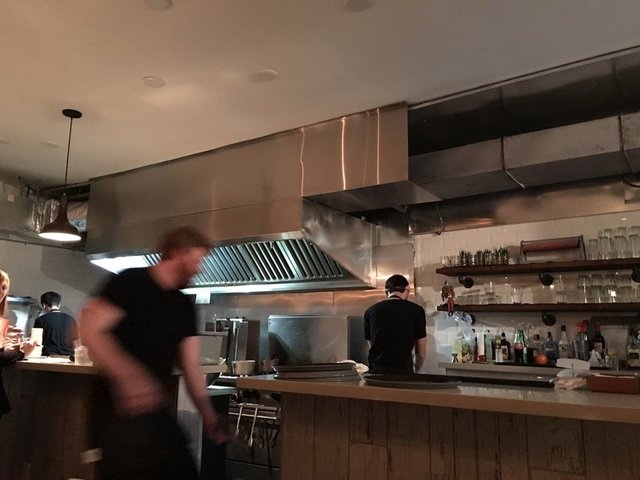 This taqueria offers extremely palatable food and drinks, obviously fresh and expertly prepared by Roe and his staff. I felt energetic and light afterwards, unlike with some other restaurant foods that can leave you feeling tired and bloated. This is especially great if you're there for lunch and have to go back to work, or, like me, you work into the evening/late night.

All in all, this was a great experience, and I would highly recommend Campechano Taqueria to anyone looking for a fantastic and healthy dining choice in downtown Toronto. I will definitely be back soon. Buen Provecho!

One thought on “Campechano Taquería”

I really enjoyed their tacos and drinks. It was refreshing and they had some really interesting combinations.
Now I need to go back for the gauc. Pomegranate seeds are terrific idea!