DaiLo is the child of Chef Nick Liu and is his take of New Asian Cuisine—predominantly Chinese fare following French traditions. Much of his menu is inspired by Liu’s childhood—when he ate the Hakka cuisine of his ancestors. Liu and his team have reinterpreted these dishes to fit a modern, western palette and to supply the Canadian demand for local ingredients. 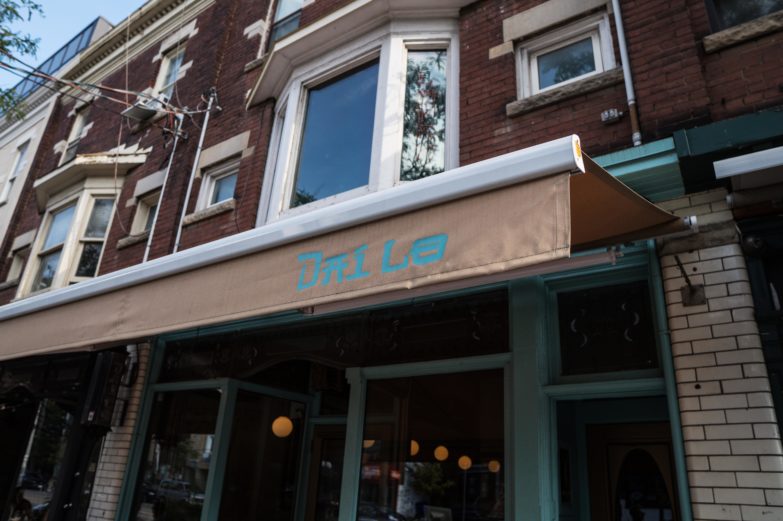 Cantonese, unlike English, has two words for big brother: AhGo and DaiLo. The difference depends on who’s saying it. In the case of DaiLo, it refers to a male speaking to an older male.

But the term DaiLo means more than just an older male sibling. It’s a term that shows respect and endearment. It goes beyond family, and boys refer to their leaders and bosses as DaiLo, as well. It’s no wonder why the bar upstairs of the restaurant—which is also owned by DaiLo—is called LoPan, which means "boss" in Cantonese. 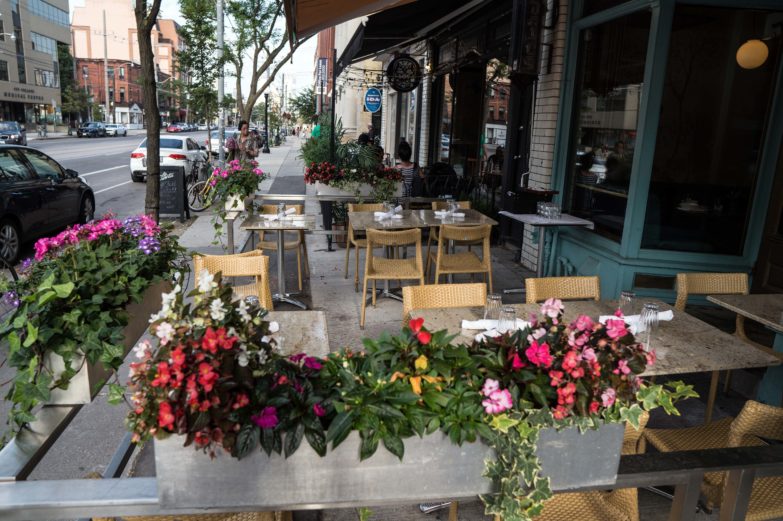 DaiLo is simply stunning. From the outside, it looks like a typical Toronto restaurant, but once I walked in, I was dazzled by the Chinese-themed decor. Wall murals displayed traditional Chinese Ink paintings. The booth seats were separated by beautiful, Asiananic dividers. And even the light bulbs followed the decor theme—I noticed one with an Ancient-Chinese-styled hilt sticking out of it.

The whole restaurant was incredibly dark, with dimly lit lights to set the tone. It’s what you expect at many higher-end restaurants in the area. Unfortunately for me, that meant that my pictures weren’t going to turn out well. From a purely dining perspective, however, the lighting really set a great tone for the meal.

I was seated further back in the restaurant, near the downstairs bar. A myriad of liquor and wine bottles dotted the walls, and a bartender was endlessly reaching for spirits to formulate her next cocktail. Overhead was a skylight, where I got a peak of the tomato plants that the restaurant grows for their dishes in the summertime. 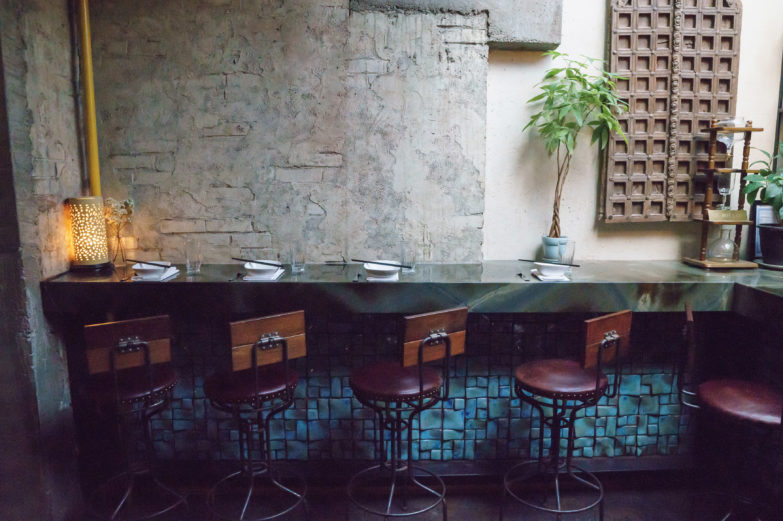 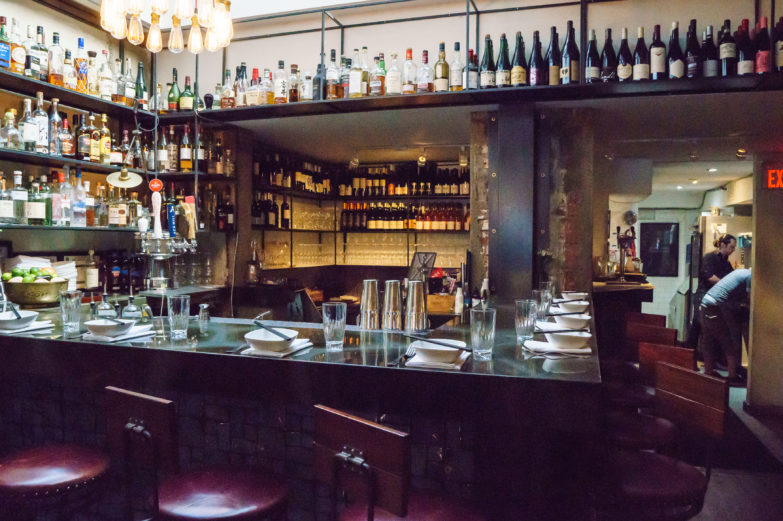 DaiLo has 19 items on its menu. It’s not enormous, but I still had an incredibly hard time choosing what to eat. The menu showed both DaiLo’s ode to Chinese and other Asian cuisines, as well as an ode to European fare. The fried rice used both black truffle and XO sauce. Another dish combined Pastrami with cured duck egg yolk. I could only imagine the creativity it took to design these dishes.

While there was no definitive line, it was obvious that the first ten items were smaller appetizer and the seven after that were mains. There was also a "Sides" section for two smaller plates: Sticky Rice and Jellyfish Slaw. The menu also had "DaiLo’s Choice", where the chef picks your meal for $65 per person. 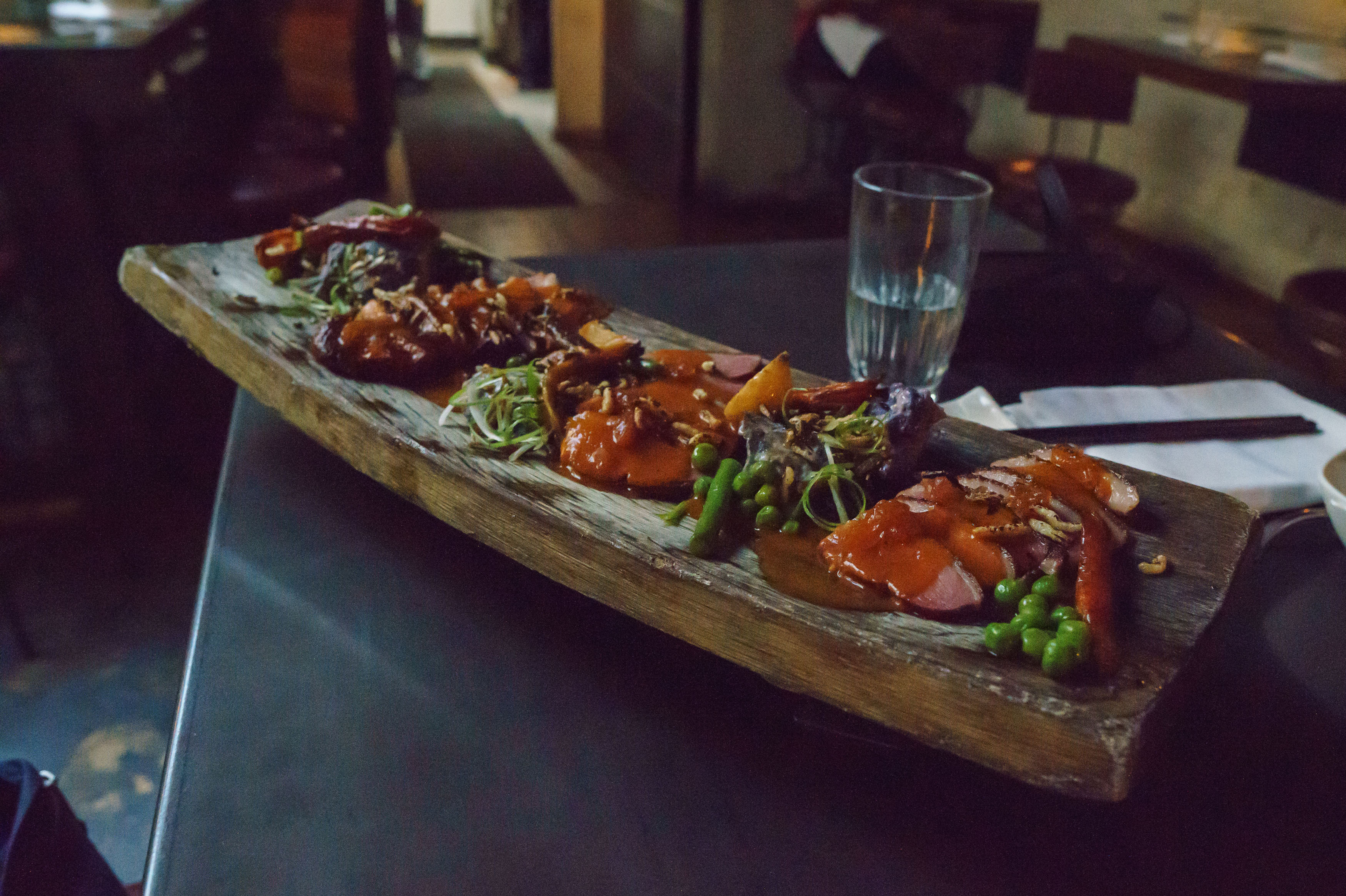 I had prepared my order when the waiter came to throw a wrench into my plans. I had a hard time deciding what to get, only to discover that there were off-menu specials! He described the Eggplant Agedashi: a Japanese-inspired eggplant dish that was soaked in a dashi broth. I was hooked.

The waiter also explained the tasting menu, which was unique from other restaurants. He told me that the tasting menu involves a consultation to discover the flavours that the customer likes and the ones that they don’t. This information is brought back to the chefs, who would then create a custom five-to-six course meal for the customer based on the information. Definitely something to try for next time. 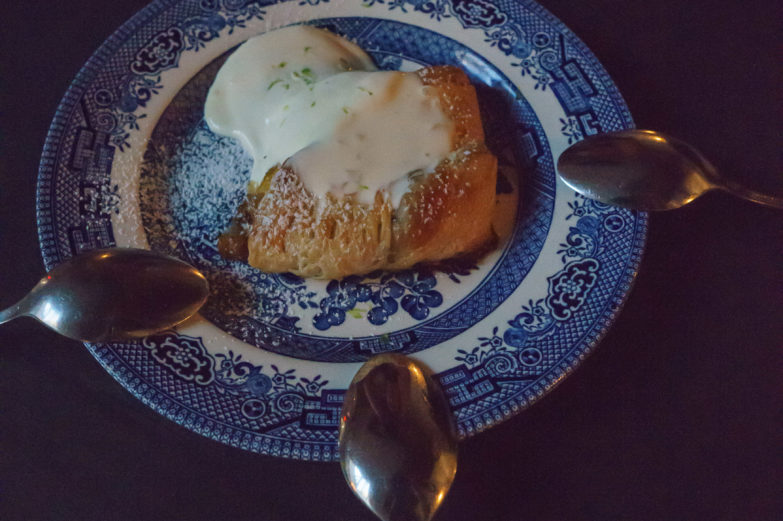 Although I had my heart set on the Hakka Brown Wontons at first, the Eggplant Agedashi won me over in the end.

It arrived quickly in a large bowl; a few massive pieces of eggplant with a spectacle of other vegetables, all in a beautiful red-brown broth.

"So you want to mix it together and make it look ugly." said the waiter.

I also noticed a clump of red radish on top and asked about it.

"It’s called a valentine radish, also known as a watermelon radish due to its green exterior and red interior," the waiter replied, "we use it since it’s local."

I vividly remember the strong sake flavour of the broth. The eggplant absorbed much of the broth, yet the broth and eggplant had two distinct tastes. The broth was more sweet while the eggplant hit the umami censors of my palette.

The scallions and mushrooms added texture to the piece. Chinese and a lot of Asian cuisines are about texture as much as they are about flavour, and DaiLo does this in their own way. Instead of a single ingredient providing mouth feel, it was a combination of vegetables working in unison. 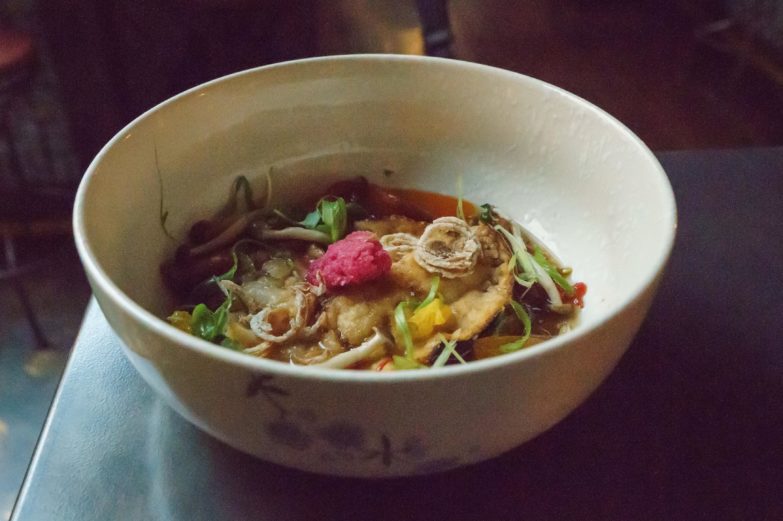 Duck is an important protein in both Eastern and Western cuisines, so I was curious to see how it played out at DaiLo. The King Cole Smoked Duck Bokkeum was duck with a mix of kimchi-pickled vegetables, red onion jam, and blue potato salad. It came to the table on a large wooden board.

Pieces of evenly cooked duck were laid out with the acidic red onion jam on top of it. If I remember correctly, the red onion jam was a play on Korean barbeque sauce.

What really surprised me was the potato salad. I was never a fan of potato salad—it’s mushy and overly salty. The blue potato salad on the platter was quite the opposite. It had the texture of a roasted or lightly steamed potato and was complemented by the saltiness and sweetness of the red onion jam and fermented vegetables.

And then there was the kimchi-pickled vegetables. The vegetables provided a refreshing contrast to the heartiness of the meat and potatoes. It gave an acidity different from the red onion jam. I loved how it worked so well with everything else, and even on its own, I could eat these vegetables all day. 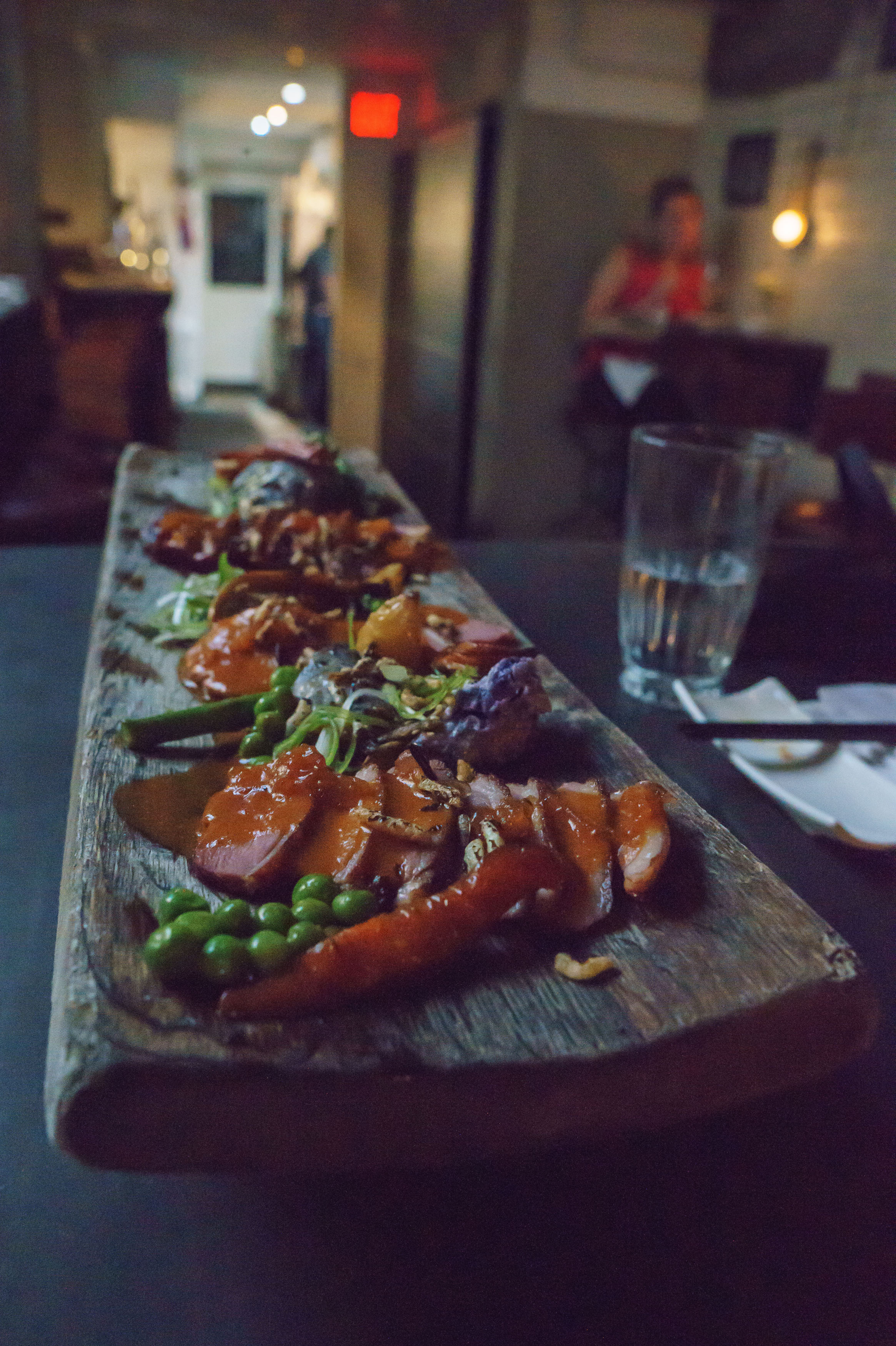 The dessert menu came separately. There were three choices, and each had their own Asian flair to it. The Champorado came with white rabbit candy ice cream, the pear dessert was poached in soju, and the white sugar cake was made with coconut lime leaf rice pudding and sake-macerated sea buckthorn.

Again, the waiter let me in on the off-menu dessert. He described it as, "a peach version of the Jollibee Mango pie." It used local peaches, of course, and was Filipino-inspired much like other desserts on the menu. The Filipino inspirations came from one of the chefs who had a Filipino background.

I opted for what I could only remember as the DaiLo rendition on Jollibee's. It came doused in a sweet cream. Fresh, caramelized peaches came locked in a tough puff pastry that could only be parted with a steak knife.

Like the rest of my meal, the dessert was delicious. I was impressed that they could pack so much flavour without being overly sweet. 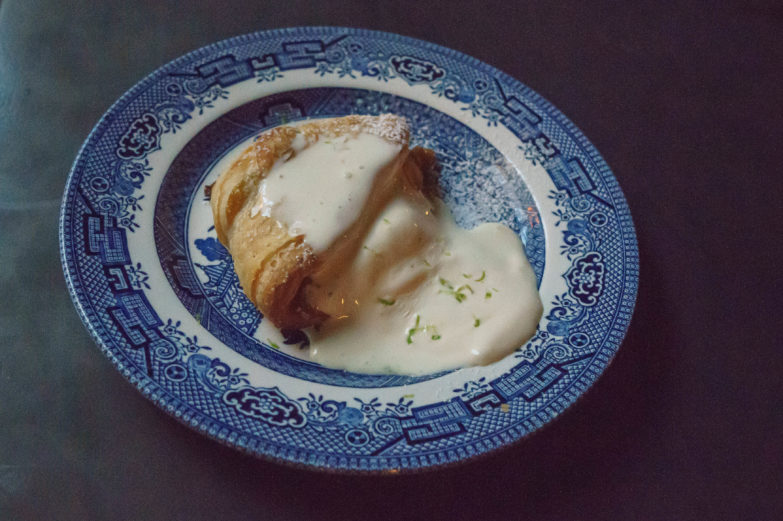 The food at DaiLo was good, but the service was even better. I wasn’t able to get a reservation, but the hostess at the front managed to sneak me in before a 7:15 group came in. It was evident that the people who make reservations were allotted more than enough time for their meal.

Our waiter was super friendly and talkative. After asking him about the red radish on the eggplant dish, he brought out a piece of valentine radish for me to see and try. 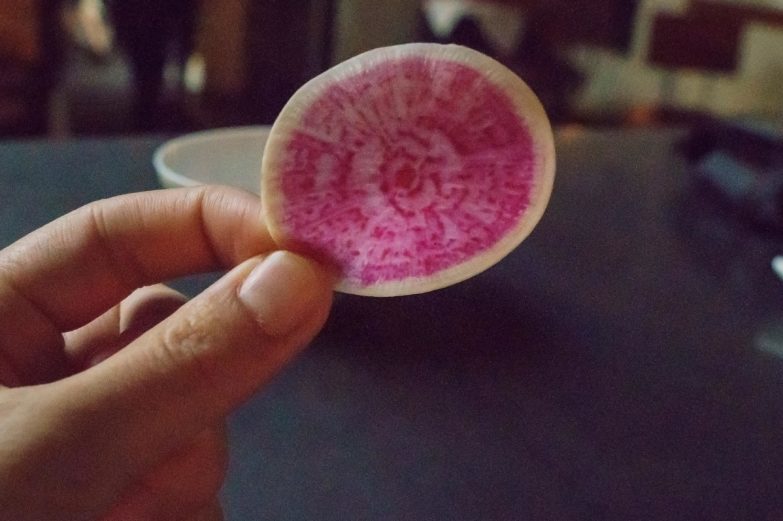 The guy was extremely articulate in his knowledge of each dish. For a higher-end restaurant like DaiLo, I was slightly surprised by how casual their staff was. Although there’s a fancy atmosphere and even fancier cocktails and dishes, there was no pretentiousness here.

I was very impressed about my experience at DaiLo. There’s so many other items I want to try for next time including the cocktails and the tasting menu. I was full from my meal, and the amount of vegetables that each dish had made me feel good about what I ate. It wasn’t too heavy on the carbs and the proteins were lean. A delightful experience.

One thought on “DaiLo”

I think that this place will definitely make a positive impression on each guest, as wonderful dishes and an incredibly cozy atmosphere contribute to this.