Hancook Cheese Dakgalbi replaced Joon's Restaurant some 10 months ago, but has quickly become a mainstay in Korea town since. Located at 605 Bloor Street West (between Markham St. and Palmerston Blvd.) the name derives from the Korean word for Korea (hanguk) and also takes inspiration from their cook's last name, Han. Very knowledgeable about Korean food, Han had her own cooking classes and even a TV show in Korea. She now owns the restaurant with her husband Tony, who is also the manager and server. According to Tony, "business is good, and is getting better and better." 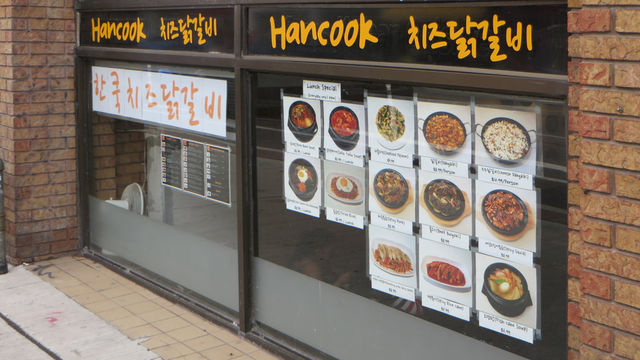 Located on the bottom level of a rather featureless tri-level commercial space along Bloor, the bright yellow lettering on their sign and the numerous images of their wares in the windows beckon you over. Descending down a small flight of stairs, you enter into a brightly lit space, aided by the picture windows looking out onto Bloor and the pot lighting along the ceiling. Soft pop rock music plays over the establishment's speakers. White walls and exposed brick also contribute to this airy feeling. The tables and chairs are dark wood, while the floor is also laid out with highly polished wood. Booth type seats adorn the east and west walls and cute and comfortable orange cushions are laid out on them. Above these seats, an orange sign spelling out "Hancook" is attached to the wall, as are photographs of all their meal options. The kitchen is visible beyond the bar area, with Han and her assistant cooking up a storm., the fragrant aromas wafting out into the dining area, enticing the customers. A very pleasant atmosphere to relax for a while and enjoy your meal. 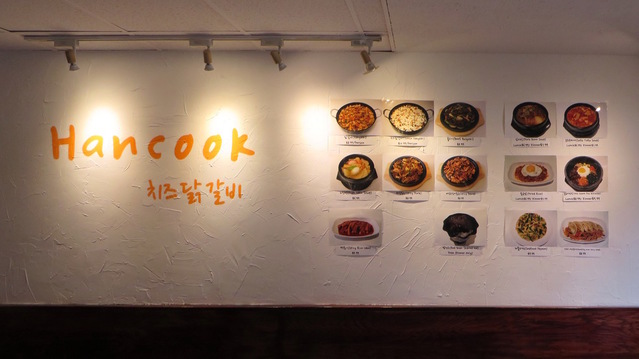 The menu runs the gamut from free side dishes (the salads and the red bean shaved ice) to $10.99 per person for the Cheese Dakgalbi. The top of the line priced item on the menu is the Soku, which is sold for $14.99 per bottle. All told, my bill came to just a shade over $20, not including the gratuity.

Like most Korean restaurants licenced under LLBO, they sell Soju (a Korean spirit distilled from rice wheat or barley), but they also sell a half dozen types of domestic and imported beer, including Canadian, Coors Light, Bud Light, Corona, Heineken and Stella Artois. They sell for $3.49 and $4.49 respectively. They also have several canned pop varieties for a buck including Coke, Sprite, Diet Coke and Canada Dry Ginger Ale . A can of Nestea iced tea will set you back 50 cents more. Since I was driving, I went for a good old can of Coca Cola. 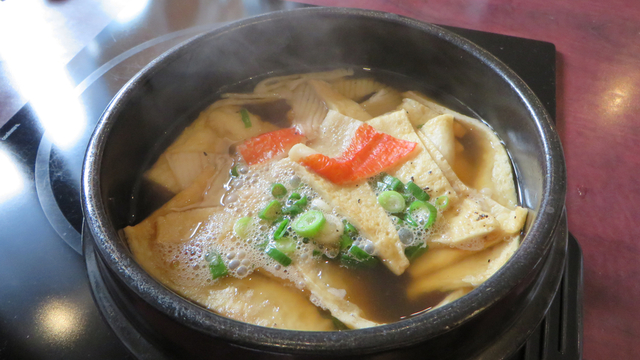 I tried the Fish Cake Soup as my appetizer, and it did not disappoint. Coming over to the table quite literally boiling hot, you'd be wise to wait a few minutes for it to cool down a touch. It is comprised of a delicious broth with fish cake, radish, green onion and a whole boiled egg. Very healthy and filling and well worth the $6.99 it costs. The Pork Bone soup is another great option, and is made with pork spine, vegetables, green onion, hot peppers and ground wild sesame seeds. Also $6.99, you can add a dollar if you have it as a dinner item. A very popular Korean snack food called the Spicy Rice Cake or Tteokbokki, which has soft rice cake, fish cake and sweet red chili sauce, is a third great choice and retails for $5.99. The free side dish of corn salad, macaroni salad and cubed kimchi (radish salad) that accompanies every meal makes for a perfect addition to your lunch or dinner. 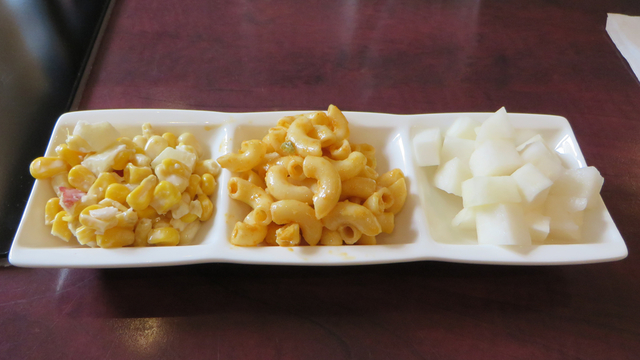 For my main course, I try out the most popular item on the menu, recommended by Tony, the Cheese Dakgalbi. It consists of stir-fried chicken marinated in a red pepper paste, cabbage, sweet potato, rice cake, carrots, and green onions. It's covered in mozzarella cheese, and while it's a little spicy, it is quite simply delectable and a steal at $10.99 per person. You can add extra cheese and noodles for $2 and fried rice for $1. At Hancook they also offer the regular Dakgalbi (without cheese) for $8.99, Beef, Pork and Squid Bulgoki (the aforementioned meat and fish marinated with soy sauce for the beef and red pepper paste for the pork and squid, carrots, onions and green onions) for $8.99 as well. They also have two Tofu dishes on hand for those of you that love bean curd. There is a pork and seafood variant, made with green onion for $7.99. Also intriguing is the Hot Stone Bibimbap for $8.99, which has steamed rice mixed with red pepper paste, bean sprouts, spinach, radish, zucchini, carrots, mushrooms, beef and egg. A couple of Spicy Fried Rice dishes with chicken and pork are also available, with sliced stir fried chicken or pork, mixed with red pepper paste, cabbage, carrots and green onions for $7.99. For all you vegetarians out there, there's a Spicy Chewy Noodle for the same price, with red pepper paste, bean sprouts, cucumber, cabbage and boiled egg. 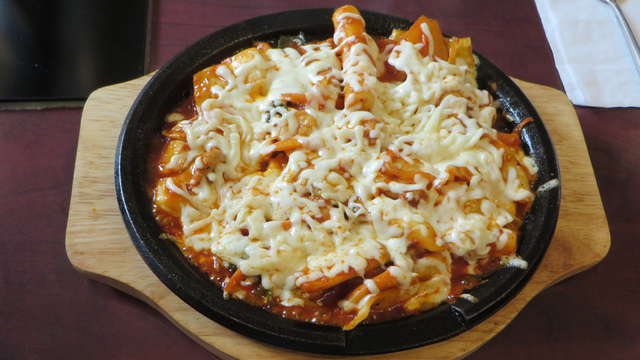 Their sole desert offering is a red bean shaved ice (patbingsu), which is highly popular in Korea and dates back to their Joseon dynasty (1392-1910), when it was exchanged by government officials. Starting out as red bean paste and ice shavings, it is now made with Azuki beans, ice and several different toppings subsequently introduced by Western influence during and after the Korean War (1950-1953). This delicacy is on the house, and is available with dinner after 4pm.

The service was exceptional and very timely. The server Tony (who is also the co-owner and manager) was very friendly, knowledgeable, and brought out the drinks and food items quickly and efficiently. His infectious smile and good nature made the very tasty offerings at Hancook that much more pleasant. The restaurant was quite busy and everyone dining there seemed quite content with the food and service.

Everything was prepared and cooked really well, and tasted very good. The feeling afterward was one of being quite full but in a healthy and not a sluggish way one might feel with some other fast foods you see out there nowadays. Overall, an excellent meal and definitely worth checking out if you're in Korea town.

Hancook is open for lunch and dinner from noon to 10pm Sunday to Thursday, and noon to 11pm on Friday and Saturday. You can reach them online at www.hancookcanada.com or at 416.516.1222.

Great place to go for a quick meal! I recommend to go for lunch and try some Patbingsu. It’s very specific, but I loved it.