A Petit Piece of Paris in Yorkville

La Societe is "a petit piece of Paris" at the edge of Yorkville, right on Bloor Street. It’s hard to miss – a staircase leads up to their large patio with dark tables, wicker chairs, and black umbrellas. Once upstairs, the ambience is transformative. It’s a stunning, large space paying tribute to a Parisian bistro, from top to bottom, with mosaic floor tiles and a mesmerizing stained glass ceiling. 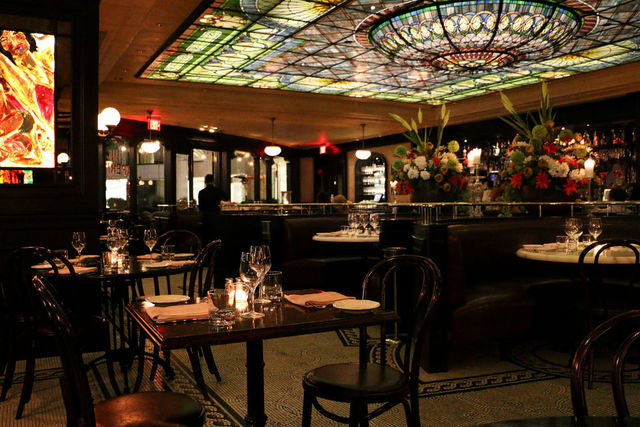 Executive Chef is Paris born Romain Avril. He was a Sous Chef in France and studied culinary arts for six years. In Toronto, he worked as the Executive Chef at Le Saint-Tropez, Marcel’s and Le Zazou. He also cooked alongside MasterChef Canada judge Claudio Aprile at Origin North, located in Bayview Village, before moving to La Societe. 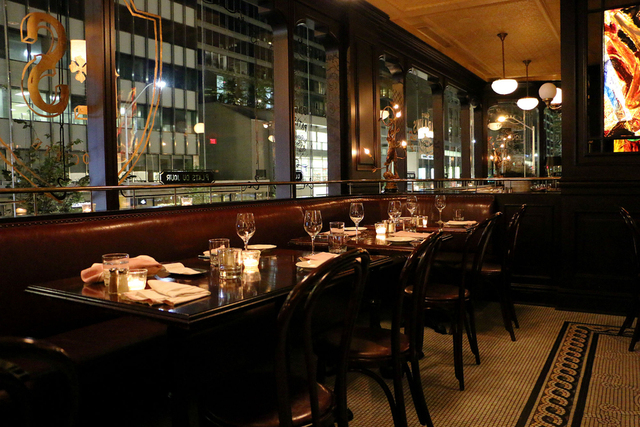 The menu caters to those working in the area for lunch, dinner and bar snacks until 11pm, and brunch on weekends. I visited for dinner, excited to try French dishes in such an exquisite setting.

Appetizers include classic onion soup topped with gruyere cheese ($13), a pan seared fois gras with brioche, citrus, and spicy chocolate ganache ($28), and a charcuterie board of sausage sec, rosette bayonne ham, and cornichons. The tuna tartar appetizer (at $23) was disappointing: a mish mash of yellow fin tuna, apple, daikon, ginger, and fingerling chips were overreaching efforts at disguising bland pieces of fish. 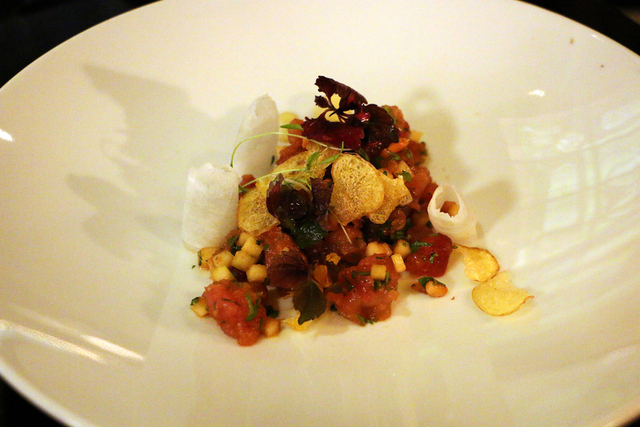 Their oysters – offered at market price – weren’t served with any interesting homemade sauces or garnish, only with one cup of ketchup and another with horseradish. The slice of lemon was the only saving grace. 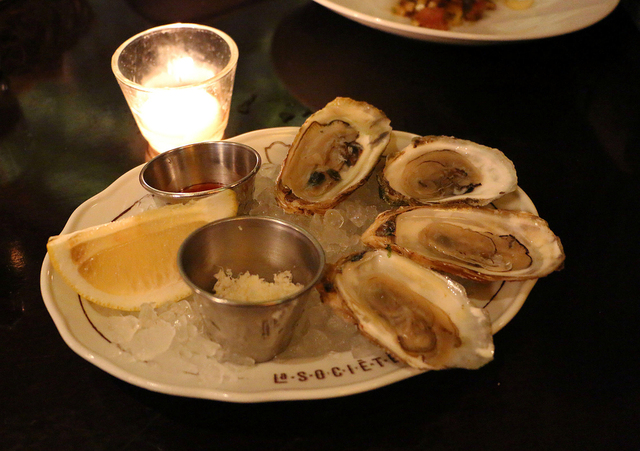 Thankfully, the mains were up to par. La Societe has daily specials (like a coq au vin on Tuesday or beef bourguignon on Thursday). They also offer prix fixe options: an appetizer, a main, and a dessert for $44. The pan-seared Irish, organic salmon was buttery soft, with refreshing lemon juices, served with vegetables. 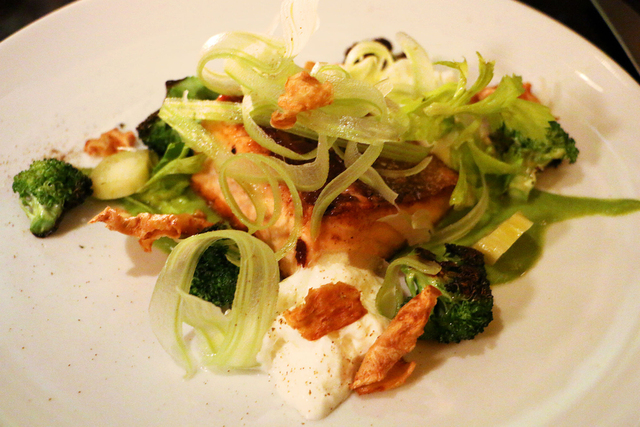 For a classic, the steak frites of grilled, dry aged striploin with maître d’hôtel butter ($29) was a decent choice, although a bit underwhelming. Other signature main dishes include the LS burger, an 8 ounce with pickle aioli and the option to add fois gras or 4-year-old white cheddar or the C’s burger with fig chutney, maple bacon, brie, arugula, smoked tomato aïoli, and pickled onions ($21). Sousvide confit pork belly ($26) and butternut squash risotto with pumpkin puree ($26) are ones to try for the upcoming Fall season. Overall, the dishes weren’t quite as memorable as you would hope for the cost and the impressive atmosphere surrounding you. 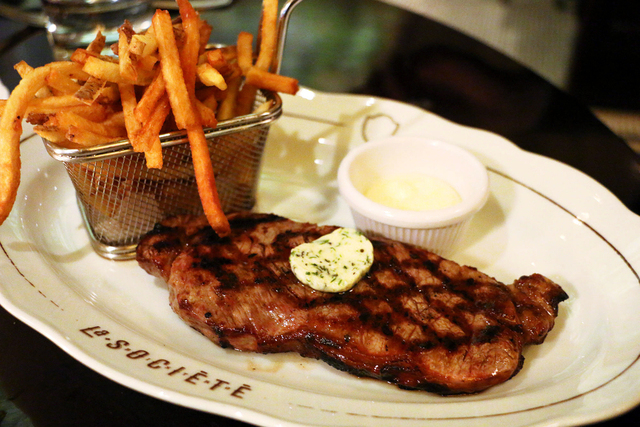 Where La Societe succeeded in the food department was surely dessert. As a harsh critic of the crème brulee, I was pleased to see theirs was nicely crisp for the perfect teaspoon cracking in the center, and a rich, creamy custard base.

Along with dinner, the list of ten house cocktails is impressive. My Green Tea Gimlet ($14) was served in a silver goblet and was made up of green tea infused tanquaray ten gin, fresh lime, orange and lemon essence. It was one of the best cocktails I’ve had in a while. Summer must-tries are also their watermelon julep with bourbon, peach schnapps, and fresh watermelon or the summer negroni with gin, aperol, cappano bianco, and grapefruit bitters ($16 each). 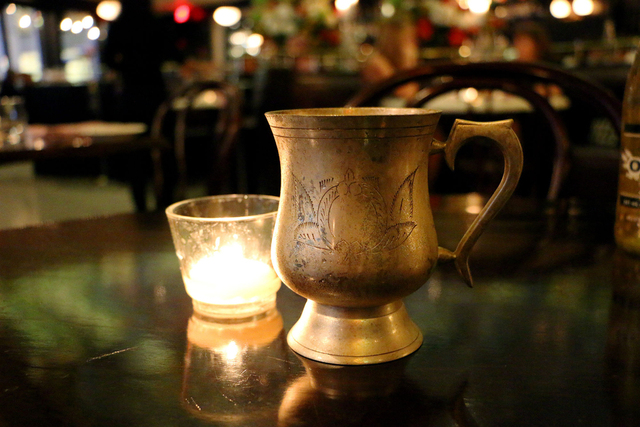 The main attraction for La Societe is the décor and environment. Matching the upscale Yorkville neighborhood, La Societe tries to create an atmosphere that coincides with its name: a chic venue for upper class city-livers to indulge in French culture. Prompt greeters at the door show you around the expansive space, with burgundy C-shaped booths, golden banisters, and that one-of-a-kind intricate ceiling that creates a glimmer across the room as the night goes on. Thick cloth napkins, plates, and glasses with La Societe engraved on them adds to the luxury. Prompt service throughout the evening is what will keep people coming back, despite any shortcomings in the kitchen. 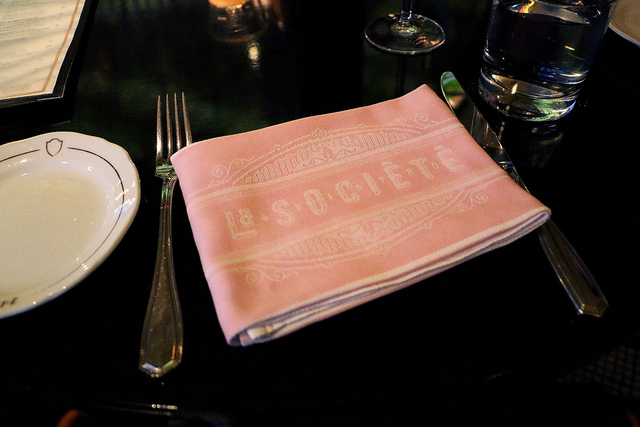 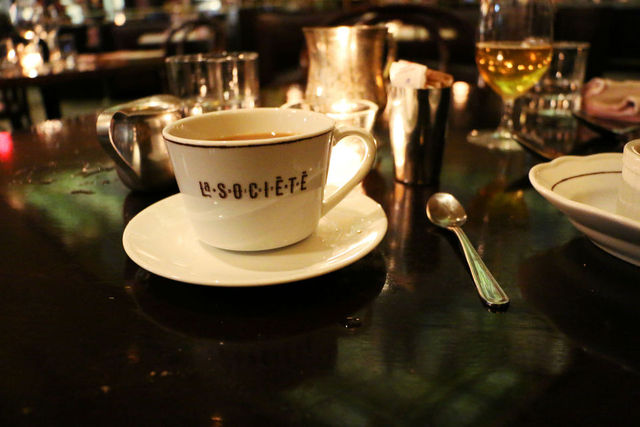 La Societe is a stunning piece of Paris in the trendy downtown core. You could do much worse than spending an afternoon walking through Yorkville and ending up at La Societe. The beauty of the setting is enough to warrant a cocktail, inside at one of the booths or outside on the Bloor Street patio. Toronto has never had a better taste of Parisian high society.

One thought on “La Societe”

I haven’t seen such unique interior for a long time. And they have good food 😀