Lee. Not the Bruce kind. The Susur kind. Famed Canadian Chef Susur Lee (of Iron Chef America, Top Chef Masters, Chopped Canada, and Masterchef Asia notoriety) captains this upscale King West eatery nestled in the heart of Toronto’s entertainment district. One of five in his extensive fleet including Bent, Fring’s, Luckee, and Tunglok Heen, Lee combines the "epicurean" traditions of China with the aesthetics and classical techniques of French cuisine. If the name sounds minimalist, it could only be bettered by another monosyllabic word: red. From the neon, diner style "Restaurant" sign out front to the pair of majestic three-panel, backlit paintings, the rose-velvet bar stool covers, bar underglow, floor-to-ceiling reflective glass, and yes, even the exit sign, Lee glows red. Think the Macau casino scene in Skyfall. At least on one side. Divided into two sections, Lee boasts a whole second wing, with exposed brick walls, 14-foot coffered, exposed-beam ceilings, a faded parrot mural, and more of a vintage factory vibe than the east wing's Asian/Vegas theme. With a street side outdoor patio, Lee completes its seating trifecta, offering diners the bustle of King West's night club energy in addition to fine dining and signature cocktails. 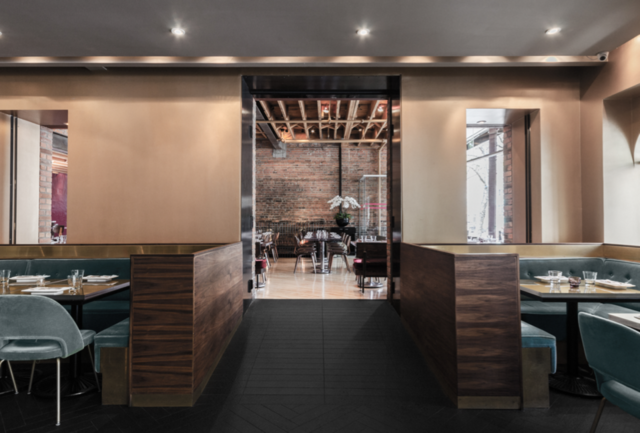 In contrast to the hustle of King Street’s clubland, Lee creates a world of quiet elegance. Mid-century furnishings grace the spacious, dimly lit interior, with a vast bar greeting guests upon arrival, replete with martini shaking tenders and velvet covered barstools. It’s an oddly homey mix: for a sophisticated restaurant, the ambiance is welcoming. The cozy bar and cast of characters dotting its stools brings to mind a cross between a classic late night Chinatown diner, and my most recent trip to Las Vegas. Dark wood finishes and hardwood flooring are accented by decorative, carved wood dividers reminiscent of a Chinese abacus. The wood veneer tables and turquoise velvet seats were comfortable if not a little tightly packed. It was hard to not delve into your neighbour’s conversation (and meal) by proximity alone. A rich crimson hue cast by glowing red triptychs emblazoning the back wall was softened by white ceiling pot lights, rounding out the space’s warm (if not clubby) colour code. Up a low rise ramp, through a narrow doorway lies Lee’s opposing west wing. Almost another restaurant, its high ceilings, exposed beams, and full length brick wall were like characters in a film. It brought to mind the importance of design and architecture; offering guests as much a spatial, visceral experience as a gastronomic one. While Lee’s patio was chock-a-block, the sparsely filled interior on this particular night made the impactful decor pop even more. The only drawback was the music. From Destiny’s Child to an odd mix of generic pop and electronic, the music was a sort of "Huh?" hodgepodge. While not overly loud, the ambiance would have been better served by some classical, jazz, a more restrained house or electronic music for the club district vibe, or even some traditional Chinese music. 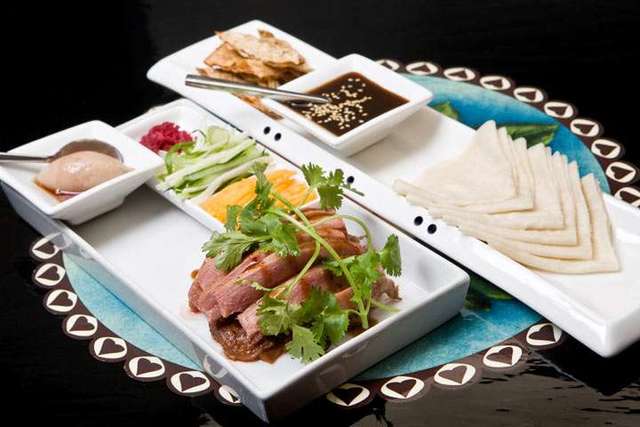 Greeted kindly at the door, I was seated promptly and welcomed within seconds by no fewer than two different servers. One described the restaurant and its shared-plate theme. A second, in thickly French-accented English, offered a second welcome, water, and the night’s specials. Soon after followed the sangria girl, presenting an aquarium-like 25-ingredient specialty sangria cocktail. Drink orders were taken quickly and arrived just as fast. Mains took a little longer, though the Singaporean Style Slaw, being a house favourite, arrived within minutes. Two mid-meal table cleanings, and a plate and cutlery refresh in preparation for my third course were nice touches. Water was refilled regularly and without asking. Interestingly each course was actually delivered by a different server. In addition, each ingredient was listed off as though that server had prepared the meal themselves. While entertaining and certainly informative, for the dense 19-ingredient slaw, it was hard to keep up. By dessert, I was a bit over it. But the practice did add an element of class and performative flair. Chocolate cake isn’t nearly as exciting as, well, every single ingredient in chocolate cake. Otherwise, service was excellent: friendly, prompt, visible when needed, invisible when not.

Want an inside look on how I prepare for dinner service? Check out HSBC Bank Canada for more https://t.co/i0KJZd0F0P pic.twitter.com/SIvNbZwF9M

Lee’s menu is chock full of innovative, visually stunning provender, with none of the usual culprits; that is, if you expected anything usual from a star chef’s Asian-French culinary fusion. There was only one mildly recognizable pan-Asian dish, the Top Chef Green Curry Chicken ($28), though the as mentioned Singaporean Slaw turned out to be a clearly Asian inspired salad. Appetizers range from $8-25 (General Tao Edamame, $8; Susur’s Signature Singaporean Slaw, $25), with mains of seafood and meat ranging from $16-48 (Cheeseburger Spring Roll and Pulled Beef Taco, $16; Korean Pepper Marinated Sirloin, $48) and an extensive dessert menu from simple sorbets ($12) to Vanilla Bean Creme Brulee and Molten Chocolate Cake ($14).

Arriving with two unpitted olives (disappointing in number and pittedness) in a rounded version of the classic martini glass, Lee’s dirty martini was clean, crisp, cold, pucker-inducing, and surprisingly refreshing. At $21 it’d be hard to justify a second round, but that only made me enjoy it all the more. 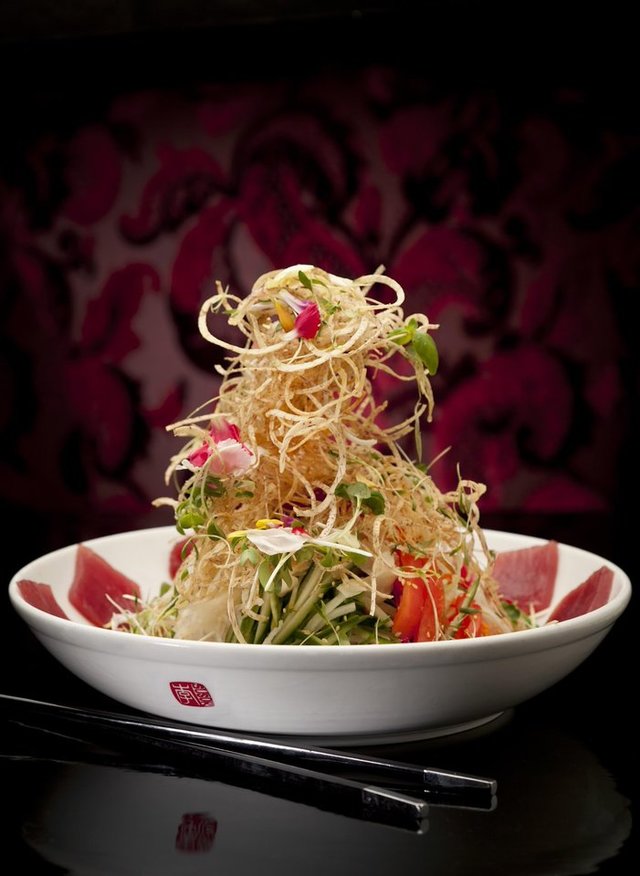 Recommended as a favourite, this Asian themed salad had no fewer than 19 ingredients. While the server tossed the initially stunning dish, crowned with thin, fried wonton-type crisps live at our table, she listed off each—and every—ingredient. I couldn’t have told you a single one of them for the speed at which she spoke. I worried more about her accidentally spitting on the food during her monologue than hearing what I’d actually be eating. It’s a salad. Got it. After the epic performance, I ate. And it was delicious. Julienned greens. Gorgeous colour. Strong cilantro tones. Prominent peanut character. Crisp texture. Each bite was a flavour reveal. It was also amazingly filling. While pricey for a salad, the slaw is a dish that delivers on both artistry and substance.

This dish’s odd initial appearance—a row of five artful looking meatballs—gave way to a delicious and near classic coconut Thai curry character. Its sparse "sides" included deep fried rice cubes—squares of densely packed rice tasting a lot like a fried potato—and grilled pineapple to balance out the spiciness. Sans the typical coconut soup and rice, it was a unique take on the well known Thai staple. A small detraction was the chicken’s texture. It seemed an overly soft mix of white and dark meat somehow shaped into a ball. You’d have thought it was ground chicken, but not being so, the texture was strangely like the stringy strands of meat off a chicken leg. That aside, the flavour was a sumptuous melange of curry and coconut. 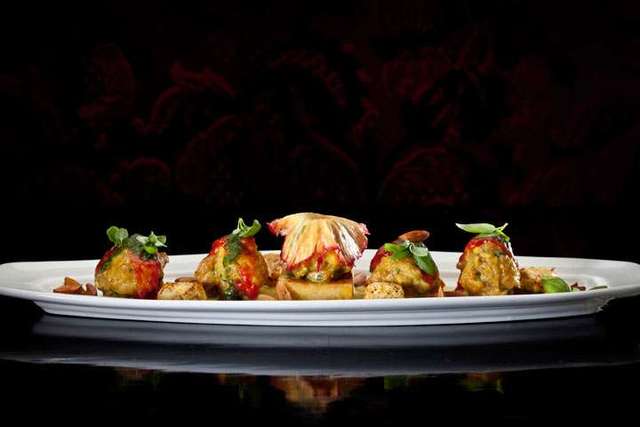 Taking a server-noted 10 minutes to make, the wait for dessert offered a much needed digestive respite. Arriving in another ball-shaped layout, the Molten Chocolate Cake was volcanic and viscous. Its warm interior was wonderfully sweet, and balanced nicely by a second ball of vanilla red bean ice cream.

I'd be lying if I said I didn't feel a little heavy after the meal. Despite the onslaught of ingredient listing, I couldn’t really tell which components were the filling culprits. That being said, the flavours were scintillating, creative, and refreshingly different, while still reminiscent of familiar Asian themes. Presentation was paramount: each dish was as much a visual feast as an edible one. Half the "feeling" of the Lee experience was the decor itself. I left with a sense I’d been somewhere new. A bit like I’d travelled and experienced a unique locale. Though while the slaw was a hit, I wouldn’t return for those same dishes. For all that Lee boasts in ambiance, innovation, and of course celebrity status, Toronto’s culinary bench—especially at the higher price point—is deep. Lee offers artistry and environment as near equal parts of the eating experience. Like going to an art gallery. And while I do love the gallery, it’s more a place you visit once every few months. While I’d choose another of the city’s high end restos before returning to Lee, I certainly would try his other restaurants, and readily recommend it as a priority destination on Toronto’s celebrity culinary circuit.

One thought on “Lee”

Great atmosphere, but I’m not sure the food is worth the money.