Montecito Restaurant brings a taste of California to the city of Toronto. A partnership between Hollywood director Ivan Reitman and Chef Jonathan Waxman, Montecito was born out of a desire to appeal to Toronto International Film Festival participants, with the TIFF Bell Lightbox down the street, while showcasing Canada’s best ingredients in a warm, Californian-style environment.

You might recognize the name Reitman from films such as Ghostbusters, Space Jam, I Love You Man, Chloe, and the Oscar nominated film Up in the Air. Married to Quebec actress Genevieve Robert, Waxman has had a continued connection to Canada despite living in California full time. He keeps busy, clearly, so it might be surprising to hear that Reitman has a strong presence at the restaurant – but it’s true. As co-owner and the inspiration behind Montecito restaurant, with images from his film work decorating the walls, Reitman is more hands-on than you’d expect. 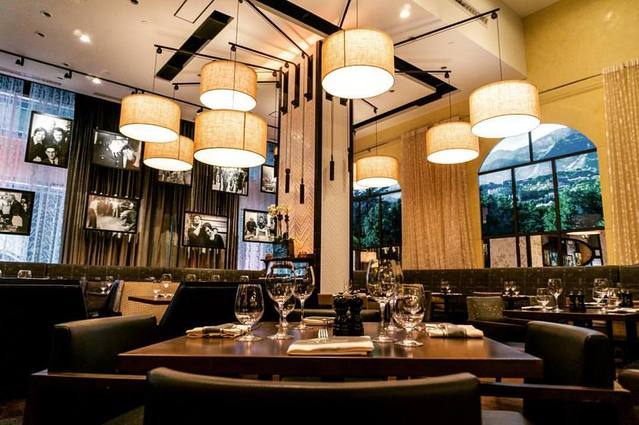 A similar case can be said for co-owner and Chef Jonathan Waxman. Native Californian, author and Top Chef Masters participant, Waxman has been a chef at restaurants like Chez Panisse, Jams, and Table 29. In 1984, New York magazine named Waxman "an elder statesman of the new California cooking." Since then, Esquire named him on its list of most influential Americans and we feel lucky to have him here in Toronto. In an interview with Eater, however, he has made clear that he is more owner than chef at Montecito.

"In Toronto, I'm an owner, not the chef. I'll make that distinction. I'm doing it because I'm friends with Ivan Reitman, the director. He asked me to make sure that he'd have a good restaurant in Toronto. He and I see eye-to-eye culinarily, we have very similar ethnic backgrounds. Will I be spending a lot of time in Toronto? As much as I think I need to, but it's not going to be something that I need to babysit. We have really fantastic local chefs, amazing guys."

Nonetheless, his mark on the food is palpable. In partnership with Executive Chef Matt Robertson, at Montecito there is an utmost respect for fresh, local ingredients that showcase what Canada has to offer with the simplicity and elegance of California cuisine. Despite the name indicating the inspiration is sunny America, Montecito restaurant is one of the most Canadian restaurants in Toronto – if you look close enough. 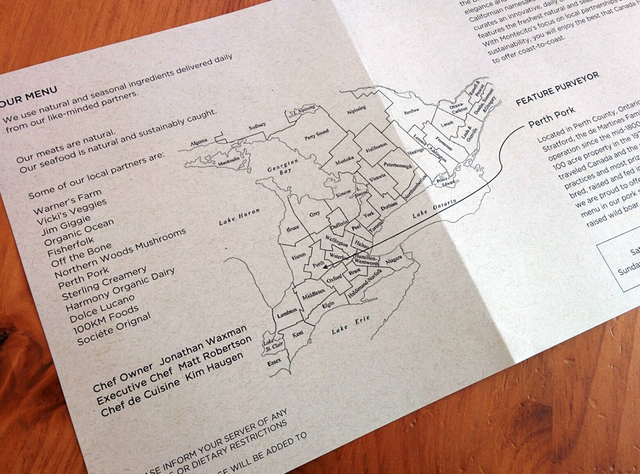 Working with local farmers, the restaurant uses seasonal Ontario fruits and vegetables for their dishes. Everything from the Maritimes best seafood to the dairy used with your dessert’s coffee is Canadian. The menu is printed daily to reflect the seasonality, on 100% recycled paper, and showcases a map with a ‘featured purveyor.’

When I visited this past fall, Perth Pork was featured, alongside a list of other local partners like 100km Foods, Sterling Creamery, Vicki’s Veggies, and Northern Woods Mushrooms. "Located in Perth County, Ontario [...] the de Martines Family Farm has been in operation since the mid-1800s," the menu reads. "Fred and Ingrid have traveled Canada and the world to bring the best practices and most prized animals home. They are bred, raised and fed in a natural, sustainable way and we are proud to offer Perth Pork products on our menu in our pork sides, sausages and even locally raised wild boar."

The combination charcuterie and cheese board ($35) I started with as an appetizer has enough selection to feed a table of six, or a very hungry table of less than that. It does not disappoint in quantity, like so many other cheese and charcuterie platters you can order in the downtown core. Cheeses included a bleu Benedictine semi-soft, fleur de monts semi-firm of sheep milk, and grey owl, ash-ripened soft goat’s milk – each from Quebec. From Prince Edward Island there was Avonlea cheddar, hard, of cow’s milk. The charcuterie included lonza, hot sopressata, ham hock terrine, veneto salami, and finocchieto. The board is served with crisp pita breads, very lightly charred and still soft, and a puddle of apple butter, honey, mustard, and cornichons. 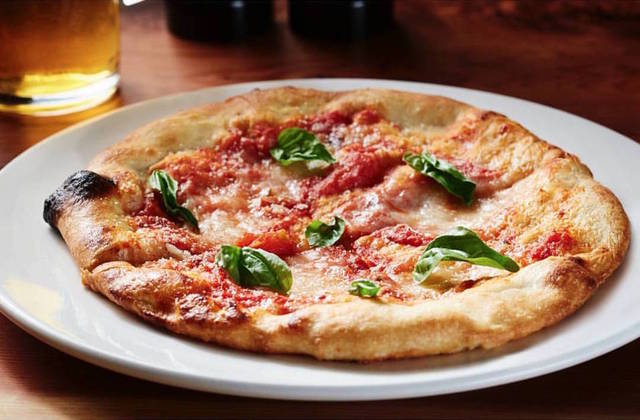 Mains are a selection of wood-fired pizzas, pasta, and carnivorous mains. The Johnny’s Hawaiian pizza ($20) was one of the best I’ve ever had, hands down. The crust was light and crispy, with charred spots on the edges and on the bottom. Large slices of pineapple, full strips of bacon, and circles of mozzarella cheese covered the top. When you’ve eaten as much pizza as I have at places all across the city, it’s easier to be disappointed than surprised. Montecito was beyond impressive. Next, I’m itching to try the bosc pear and blue cheese pizza ($19), since I was warned by the waiter it was an ideal choice for any cheese lover.

The chitarelle, flavourful to indicate it was surely made fresh in house, was served with three large meatballs – perhaps a tribute to the Bill Murray film of the same name. They’re cheesey, crumbly, with a touch of spice.

There are other mains like rainbow trout with a beurre blanc ($30), duck breast with crab apple ($32), or JW (short for Jonathan Waxman) chicken with salsa verde ($25). 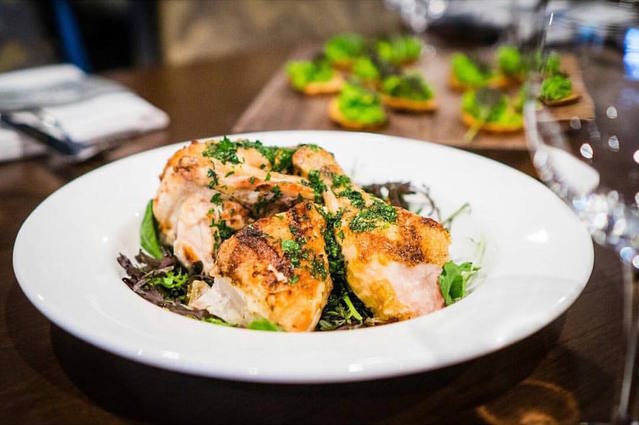 For date night, Montecito has dishes labeled for two or more, like a 32oz dry aged porterhouse steak to share with a choice of two sides, like chilled cauliflower with yogurt dressing or whole broccoli with hot sauce.

The prices on dishes are to be expected given the celebrity status behind it, location, and ingredients being used. However, with cocktails at the $14 mark and mains hovering around $32, I find myself wishing it was a restaurant that made itself a bit more accessible.

The 12,000-square-foot restaurant space on Adelaide is admirable on its own. Classy movie posters line the walls, and every last detail is accounted for. The design is elegant and contemporary. The first of the two-storey dining room uses 4k technology with their 55" screens in arched windows, playing video from Montecito, California. An upstairs event space can host small groups to hundreds for red carpet film launches, private entryway included. Next to that, an upstairs bar will work perfectly with their late night menu, catering to the after-theatre crowd, open Thursday to Saturday until 2am. Service is prompt, informed, and courteous – nothing but respectable to match the sophisticated space. The warmth of California is unmistakable throughout the room, and continues to be even as Toronto drops to subzero temperatures. 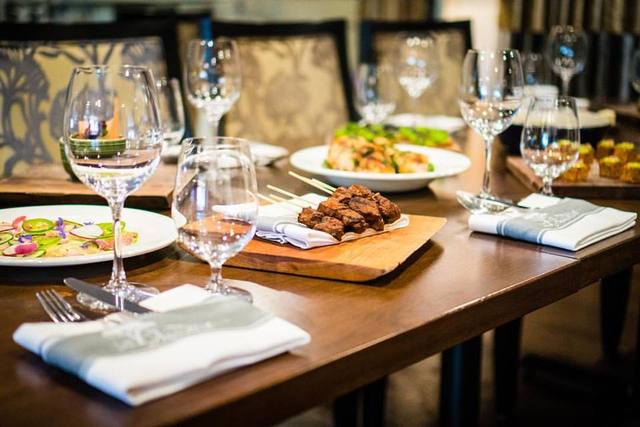 The table is set
Photo by Montecito

Montecito Restaurant is impressive for locals and visitors alike. With its proximity to the theatre and entertainment district, I can easily recommend it for pre- or post-show dinners whether it’s film festival season or not. The serious respect and love for Canadian ingredients is impressive, and not to be missed by anyone who is looking for a seasonal or locavore dining experience. Montecito Restaurant paints a delicious picture of a relationship between California and Ontario you may have never imagined.