By and large, Indigenous food is rare in Toronto. Yes, you can get it if you go to Indigenous gatherings or ceremonies, and if you seek it out specifically, but there’s a lack of culinary object permanence to this; there are few places where you know that, on any day of the week, you can go to enjoy Indigneous cuisine.

Cue NishDish. After operating for the past 12 years as a catering service, the company took over the corner building that was once occupied by Tacos El Asador, right in the heart of Koreatown. Serving traditional Anishnawbe cuisine, NishDish is a small counter-style restaurant. If ever a place could be defined as unpretentious, it’s NishDish: it seats about 20 (if everyone squeezes), and the arrangement is simple: two communal tables and a window-front counter. 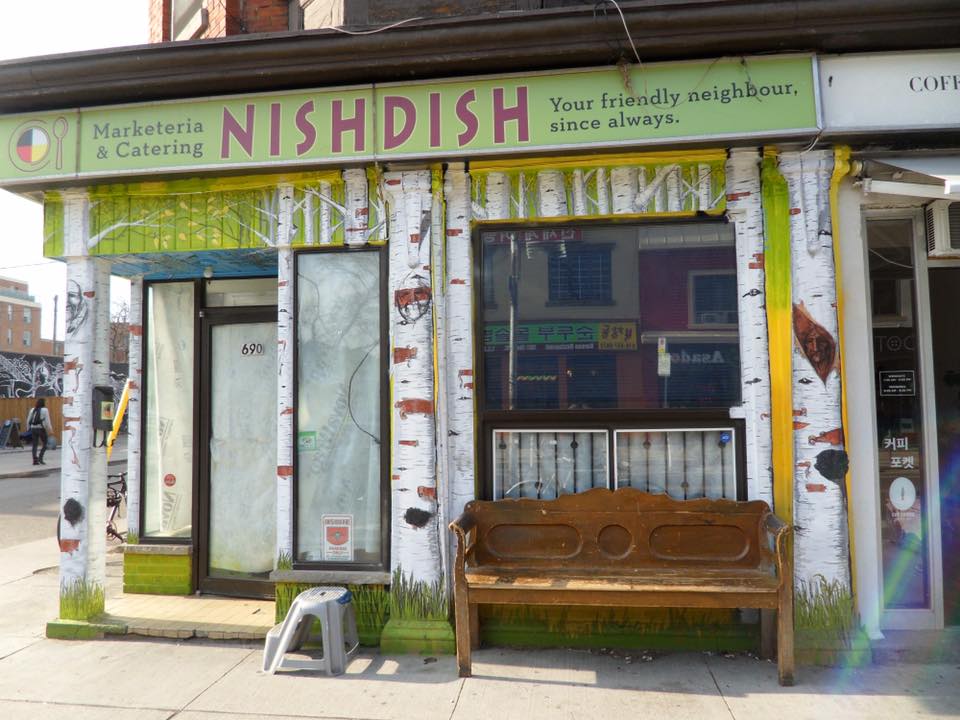 The importance of having a hub for traditional Indigenous cuisine cannot be understated; Toronto is a city of nationalities which means, in practice, that it is a city full of restaurants. Food is culture, heritage, identity, and so having a brick-and-morter spot to eat that food, then, is a physical manifestation of all those things.

For many, traditional Anishnawbe food will be a novelty, and therein lies the paradox at the heart of NishDish: it will be, for many people, a novel culinary experience, despite the cuisine being, in fact, one of the least novel in the city. I suspect that for Indigenous people this will too be a novelty, in that there are few places like this in the city, few places to sit and enjoy a traditional meal from your own cuisine.

If you’re looking for a formal dining experience, NishDish isn’t it — billing itself as a ‘Marketeria’, it is more like a grab-and-go establishment than a sit down restaurant. (Indeed, many of the people who ordered while I was in did so for takeaway.) One of their goals is to establish themselves as a cultural hub—a place that Indigenous people can gather and form community. This is a surprisingly literal, rather than figurative, goal: while I was sitting, the owner, Chef Johl Whiteduck Ringuette sat with a number of Indigenous individuals; they discussed their backgrounds, their traditions, and their heritage. "What nation are you?" he asked one customer, on her way out. For a working kitchen that by their own admission had been swamped earlier that day, the time taken to talk to people is admirable. Their goals, as far as acting as a cultural community hub, are just as important in understanding what NishDish is as their food.

The decor is, perhaps suitably, understated. There’s a cultural mural on the ceiling, surrounding the ceiling fan; a flag with Indigenous symbology hangs on the far wall; a third wall boasts a large inventory of maple syrup and Indigenous-made coffee. Two picnic tables take up the majority of the restaurant’s floor space. It feels, in a word, no-frills.

The stripped-down nature of the decor is not at odds with the food, necessarily. It’s easy to see these dishes as on the upper-end of complicated--it’s not often, for instance, that elk sausage is offered--but this is more an effect of their novelty. At heart, the food is very simple: traditional Indigenous ingredients and meats. In this sense, novelty and tradition are not at odds--traditional is a curious, and insufficient, term to use, because that tradition has for so long been obscured from Canadian life.

One thing that is worth noting about NishDish is that it is not a dinner restaurant, per se. It closes at 5pm, Tuesdays through Sundays (it’s also closed on Mondays), and on weekends (such as the Sunday that I ate there) its menu consists of an all-day brunch selection. Many of the items, like the bison sausage, are crossover dishes, but there are a selection of weekend-specific brunch items as well. In keeping with its food-counter approach, it isn’t a menu split up into appetizers, desserts, and mains--instead, there are sides that can be ordered with your main, as well as soups and salads. (For all-day weekend brunch, however, they forgo a dessert and soup menu.)

Always a sucker for quiche, I went with the Woodland Quiche--a quiche with sauteed wild mushrooms and spinach. Your opinion of this dish likely hinges almost entirely on your taste for mushrooms. If you are the type of person for whom the earthy, subtle flavours of wild mushrooms aren’t appetizing, I would not necessarily recommend the quiche. If you are, though, I would: the mushrooms were not overloaded with butter or oil during the sautee, and so retained their natural flavour. The spinach was a nice counterpoint, and added some textural variation, though not much in the way of flavour.
Another thing I find irresistible: corn bread. I complemented my quiche with a side order of corn bread, which was served with butter and a bit of raspberry jam. It is gluten-free, and so a bit denser than one might find in, say, a southern corn bread--but no less tasty, in my opinion. As a side, it punched a bit of succulence and savoury into the meal which, in contrast to the earthy mushroom quiche, was a nice balancing aspect of the meal.

Along with the quiche and cornbread came a simple pear, cranberry, and spinach salad, with what tasted like a simple vinagrette. This added a punch of tart, fruity flavour that was absent from the other two parts of the meal.

All of this, served on one small plate, formed a nice--if slightly smaller than I would have hoped--meal that offered a nice entry point to traditional Indigenous cuisine. 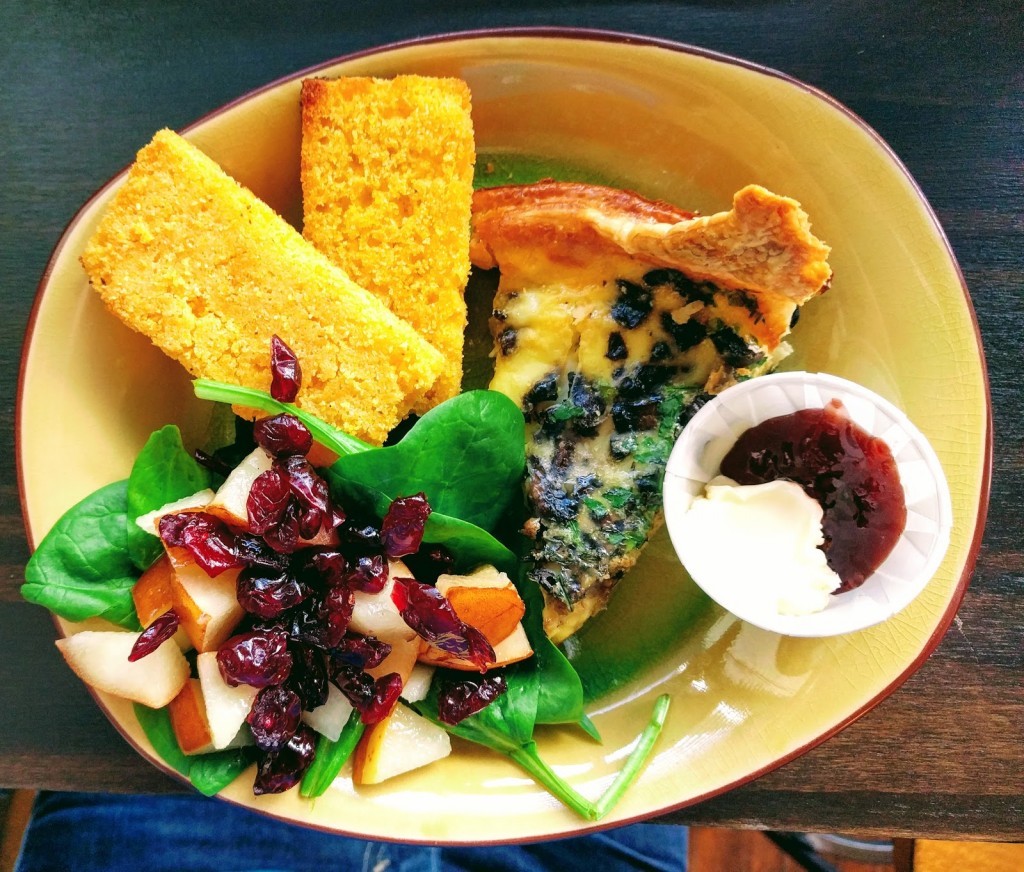 NishDish offers a selection of teas, from cedar tea to wild ginger. In addition, there are also a number of cold beverages available: strawberry juice and apple cider. During my meal, Chef Johl brought out a complimentary glass of lemon and wild ginger water, which will definitely be something I would return for during the summer months.

There is also a selection of Indigenous coffees, which is a rarity in the coffee shops of Toronto. I opted for a cup of black coffee which, though not the best cup of coffee I’ve ever had, was certainly far from the worst.

As a small establishment, there is flexibility as far as service is concerned. Chef Johl was circulating through the restaurant, talking to various diners. Staff, too--from the counter to the kitchen--milled about the restaurant, allowing for service in a free-form, less structured system. Part of this, I imagine, was the result of my eating later in the day; had I eaten during the morning or mid-day brunch rush, I’m sure things would have been a bit more hurried. The staff at NishDish seem to buy into the notion that what they are offering is not just a dining experience, but a community as well.

For a newcomer to Indigenous food--in truth, someone who doesn’t have regular contact with Indigenous culture in the first place--dining at NishDish is both an experience of food and an experience of culture. To assess the restaurant is really to assess both of these things; NishDish’s appeal is both quality food and a cultural introduction to a culinary tradition that has been here all along. By the time I was done, I never felt blown away by anything: I didn’t try anything that felt exotic, or unfamiliar. I think that’s the point: Canadian cuisine, to the extent that one can define it at all, has incorporated many aspects of Indigenous flora and fauna: corn, legumes, and meats like bison and elk are all not necessarily foreign entitites to the Canadian palate. But when they are consumed, it is rarely in its authentic form: we create bison hamburgers or elk burgers, subjecting them to a whole host of tiny vulgarities that come along with culinary colonialism. And as such, the appeal of NishDish is that it allows a reprieve from a culinary tradition that has adoption hard-coded into it. In an age where fusion restaurants, and modern-this or modern-that are abundant, an unpretentious and uncomplicated approach like NishDish’s is, curiously, a more significant and substantial cultural experience.