Opened in 2014, Pai is a Northern Thai food restaurant that, in the heart of the polished, glassy entertainment and financial districts of the city, stands out for its relaxed approach to dining. Where many of the restaurants in the area are higher-end, business-oriented spots—think Mumofuko, which is only a couple blocks away—Pai seems less concerned with polish and more with having some fun. 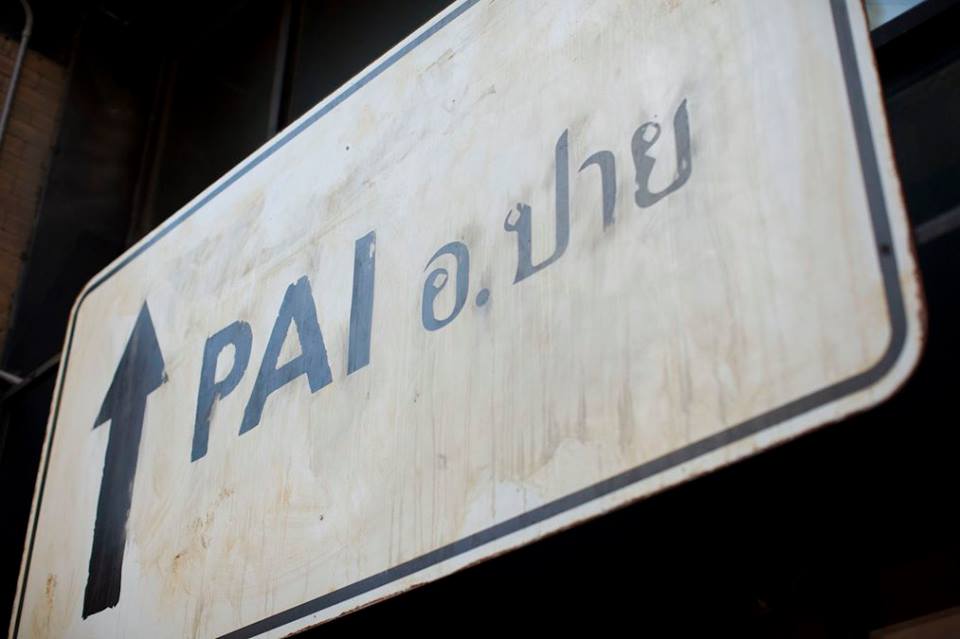 The best way to understand Pai is to think about its owners, Jeff and Nuit Regular. The two met while Jeff was travelling through Thailand, married, and returned to Canada, eventually operating a string of restaurants that includes Sukothai in Regent Park and the former Khao San Road (now closed). The restaurant is genetically founded in the melding of cultures. This is, of course, a Canadian story; our country, our city, is built on immigration and multiculturalism. But in the restaurant world, this doesn’t always mean that authenticity follows. It's hard to say for certain whether a diner is supposed to get an authentic Thai experience out of Pai, both in terms of the food and the setting, or whether this is meant to offer something different.

Pai, on first glance, certainly feels like a Thai restaurant: the wood decor, the religious symbology that adorns almost every square inch of the walls, and the playful signage results in a restaurant that is perpetually dressed up like a restaurant that has been transplanted straight from Thailand. If you look closely, though, the cultural fusion becomes apparent: for instance, two drawings that are made to look like the classic image of the Buddha, for instance, are actually Brooklyn-esque hipsters. In other places, the authenticity shines through, if feeling a bit gimmicky. In a corner section of the restaurant, the normal chair-table arrangement is replaced with a large group table where diners sit on cushions. (To my chagrin, we were not seated there.)

This is all to say that Pai is neither authentic nor inauthentic, per se. It balances this simply by laughing at itself, and as a result it doesn’t feel like an attempt at cultural appropriation, nor an attempt to create a caricature of something that is authentic. The decor is self-consciously playful. This is not an insignificant point, because the experience itself is playful from start to finish. The atmosphere is less one of fine dining and more one of drinks and food with friends. And it shows in the clientele: at least on this Tuesday night, the 80-odd-seat restaurant was filled with a younger crowd, as many of them ordering drinks and appetizers as sitting down to full meals. 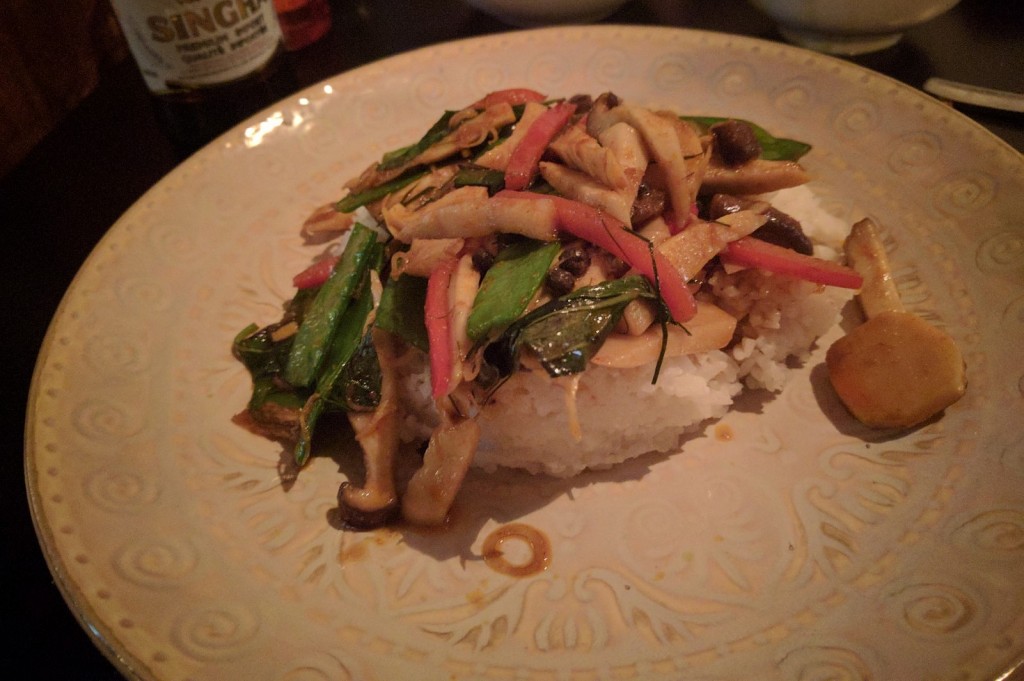 The menus range is limited in some senses, if only because it sticks to one type of cuisine: Northern Thai. Within this fairly narrowly defined menu, then, it is hard to comment on the breadth of the selection. What I can say, though, is this: there was a decent selection of flavours, varieties of curry and level of spice contained within a menu that stuck mostly to rice and noodle dishes.

In other ways, though, the range of the menu is impressive. There were a decent number of appetizer selections to choose from, including a range of salads. When it comes to the mains, each dish can be made with a different variety of meat, which essentially makes the menu some orders of magnitude larger than it appears. The range, defined as number of options, is good, and it is doubtful that this menu will leave anyone without something that they will enjoy.

The appetizer we ate was called ‘Grabong.’ ($13) It's hard to describe exactly what it was, but it was delicious. The buttercup squash fritters looked a lot like a pile of intertwined sweet potato fries, complimented by a sweet-and-spicy chili sauce that I would have drank out of a glass if I could. (Not kidding.) The fritters were fried in a red curry paste batter, which provided an interesting and spicy variation on fried batter. It was less oily, and far more textured in terms of flavour than fried fritters often are. In a way, this tasted a lot like a Northern Thai take on something approaching pub grub. It’s a good thing the rest of the menu was heavy on vegetables, because this tasted far too good to be particularly healthy.

One major thumbs up about the appetizer is that for $13, you are certainly getting your money’s worth. Two large fritters was more than enough for two people to share—we even had some extras left over that we had to save, lest we fill ourselves up before the main course.

If the decor (and the clientele, frankly) belies Pai’s authentic Thai qualities, their food certainly doesn't. I ordered Pad Cha Hett ($14) which was a simple dish: veggies on rice. The veggies were unmistakably fresh, and tasted like hey had been cooked over an open pit flame. To be honest, the smokey quality was a bit dominating, though not necessarily in any bad sort of way. I'd ordered the second-from-spiciest level of spice, but the dish failed to turn up the heat in any meaningful respect; this is either a comment about the dish, or my own tastebuds. Either way, I wanted some more spice.

The green curry dish that my partner ordered, which came deconstructed and served in a coconut, was also a strong offering. The curry flavour was strong, balanced well by the coconut milk base. Here, though, presentation became more of a hindrance than an asset. The rice was served in a small bowl, not big enough to scoop any of the veggies or curry sauce on. We were left with side plates, which had already been used for our appetizer course, to hold our dish. It was an awkward serving arrangement, but that doesn’t mean worse food or anything.

The food, for its part, felt like an authentic Northern Thai experience, while remaining accessible. There was nothing in the dish that I was surprised to see, nor anything that made it feel like an especially exotic variation on Thai food. What it did offer, though, was a well-rounded and honest dish amidst a restaurant that seems to struggle with where it sits on the authenticity spectrum. 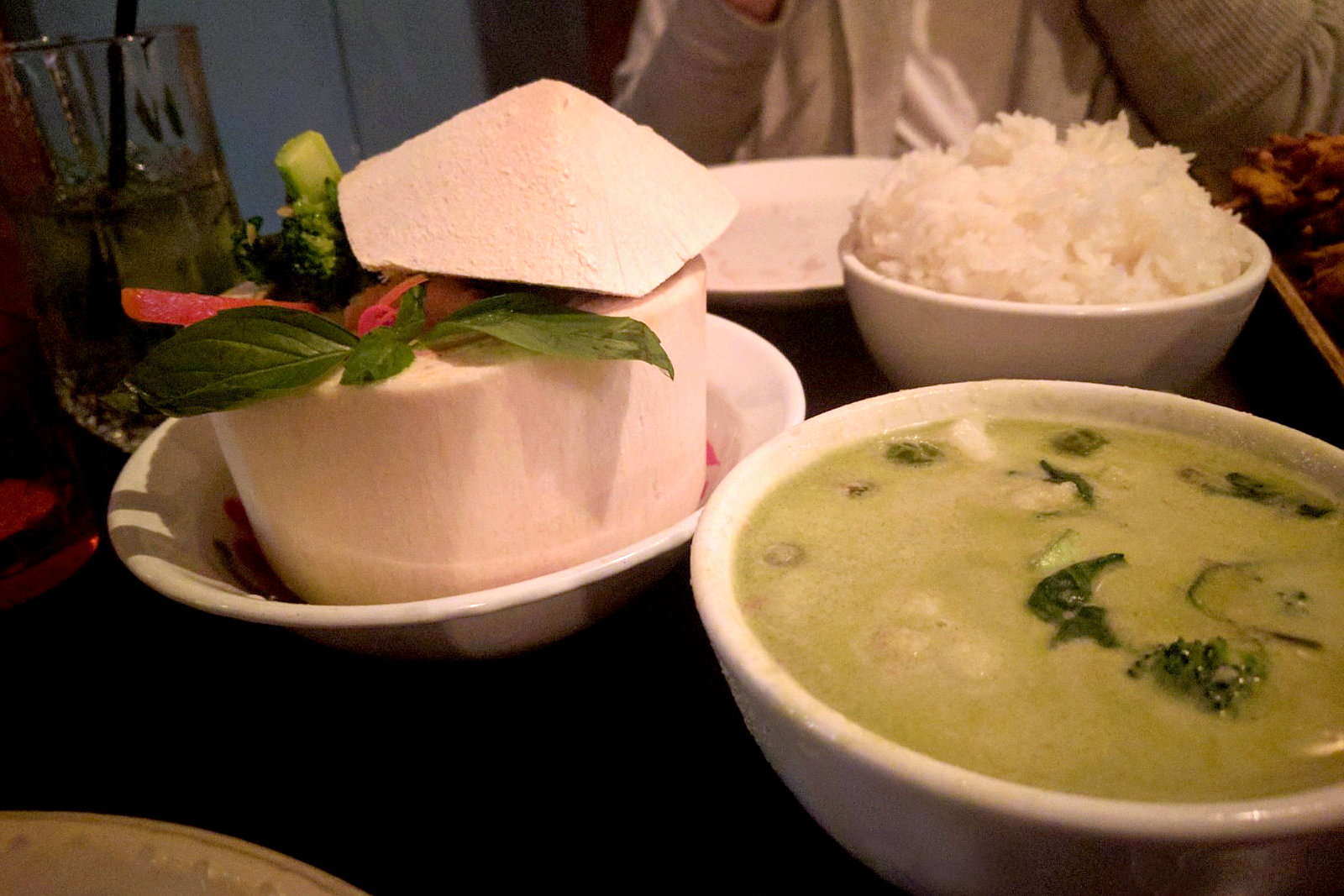 Pai’s dessert menu is a rotating offering of seasonal dishes. We were served a dish of coconut ice cream, which had been covered with coconut flakes and peanuts. As desserts go, it wasn’t anything special, but it wasn’t bad either. In many respects, it was a nice counterpoint to the rest of the meal, in that its simplicity was a nice end to a meal that had been marked by interesting dishes and a wide range of strong flavours. While it won’t necessarily win any awards on its own, it succeeded in its functional role, capping off a meal with a light, but tasteful, final dish.

In its drink options, Pai seems content to try to capitalize on some renewed interest in the Toronto Raptors. They have a five-drink section with offerings like "The Lowry" or the JV#17. All of these have a nominal Thai twist, expressed through the use of ginger and lemongrass syrup. As with the rest of the restaurant, they betray the restaurant’s ambiguity, insofar as it sits somewhere between being a somewhat campy Downtown Toronto restaurant and an authentic expression of Thai cuisine.

There are other drinks on the menu, too — a selection of fairly predictable cocktails, with slight modifications in ingredients and name — but it’s nothing you couldn’t have anywhere else. They have a selection of beer and wine as well, but it too is nothing mind-blowing. Maybe the best way to sum this up is this: don’t come to Pai for its mixology, but it’s not a reason to avoid it, either. 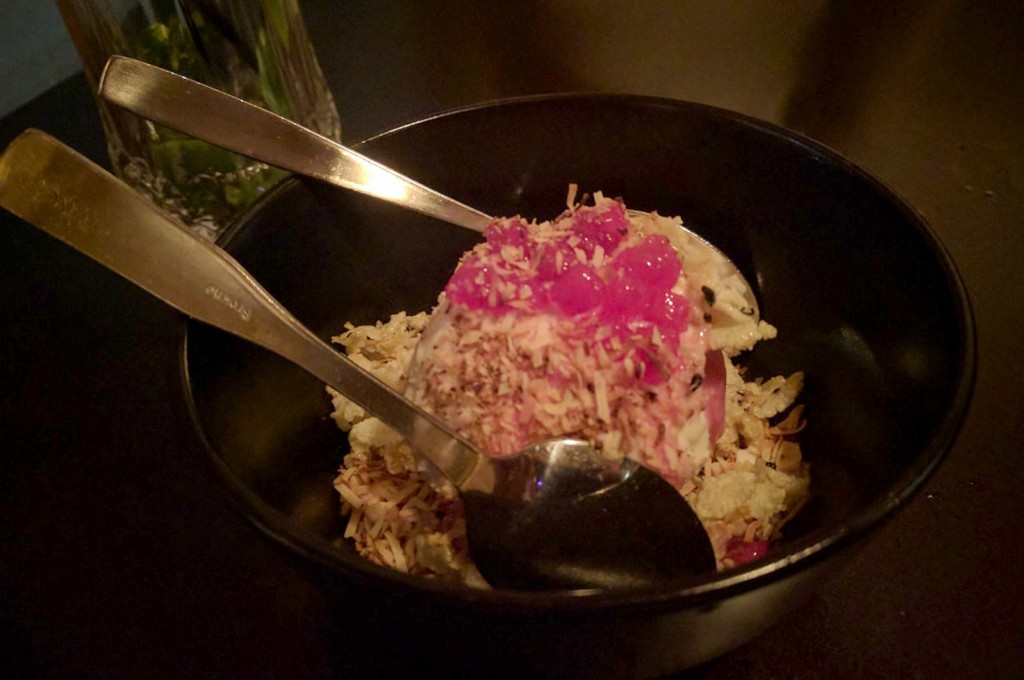 Pai is a big restaurant, and we ate at an awkward hour: 9pm on Tuesday. Still, it felt as if we were forgotten in the staff changeover. The service at the start of the meal was great, but as the restaurant approached closing time, the staff started to dwindle and it was hard to get our server’s attention for either our dessert or our bill. Which is all to say that for us, service was hit or miss. Our original server was great, it should be said: she talked to us about the restaurant, the menu options, and what sorts of drinks she thought we should order. Our food was brought out in a timely manner, and she was flexible with us ordering in stages. And, amidst a packed restaurant, she was relaxed and talkative. My complaints are mostly about the organizational aspects: once things started to wind down, it felt like staff had no clue who was supposed to be serving us, who would bring us our bill, and who would clear our table. It was frustrating, but not a distraction.

Full. The portion sizes at Pai are impressive, and allowed me to take home most of my meal for lunch the next day (which was equally as good). And in a lot of ways, the dining experience was a fun one — there were plenty of things to look at on the walls, and the food was unique enough to be an experience that satisfied curiosity as much as it did hunger. And yet, I was left a bit confused by the whole thing. It never felt, as I’ve mentioned, like an authentic Thai dining experience, even if the food was authentically prepared. But nor did it feel like a run-of-the-mill downtown Toronto dinner-and-drinks experience, which are endlessly replicable. I could never tell if the restaurant itself was impersonating Thai culture insofar as it felt exaggerated in the decor. One thing is for sure though: the food is no joke. If you can stomach an atmosphere and decor that is either authentic or a caricature, then you will be rewarded by delicious food (and lots of it).