Pie Bar was founded in 2017 and is the first, and currently the only, pizzeria by Fab Restaurants. Fab also owns various pub and kitchens in Toronto such as Murphy’s Law and Urban Tavern.

The Italian eatery sticks to fresh plates of pasta and traditional Neapolitan pizzas, however, they do make a few twists to tradition that "nonna would definitely not approve [of]". 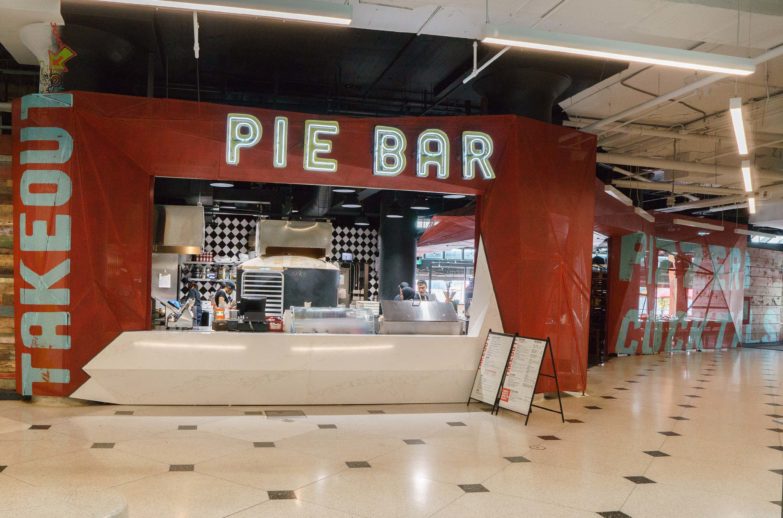 Located right on the Toronto waterfront, and with a patio looking out at the water, Pie Bar’s scenery was nothing short of stunning. The restaurant’s patio is dotted with colourful teal and red chairs and parasols which created a fun and relaxed atmosphere. This cute colour scheme continued into the interior of the restaurant and was complemented with earthy tones from the walls and floors.

The entrance of the restaurant was hard to find. I expected it to be on the exterior of the building, but actually had to enter the office building that Pie Bar was attached to to find the entrance. The entrance of Pie Bar was beautiful. Bright neon light spelt out the restaurant’s name with a view into the eatery’s open kitchen right underneath. This section is where people can order takeout.

The restaurant's interior decor was even more gorgeous than the outside. Dimly lit lights contrasted the immense amount of natural light that was let in by the floor-to-ceiling windows and skylights. I had come early so the restaurant was practically empty, and therefore, snagged a window seat on the inside to get a view of the Toronto waterfront. 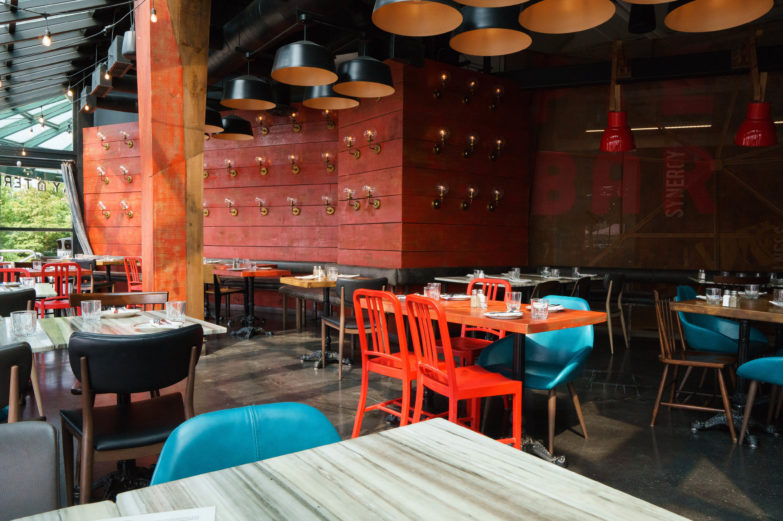 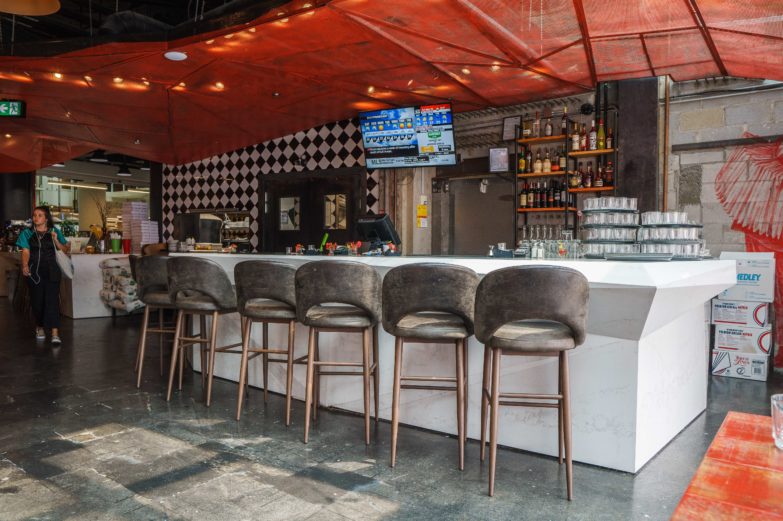 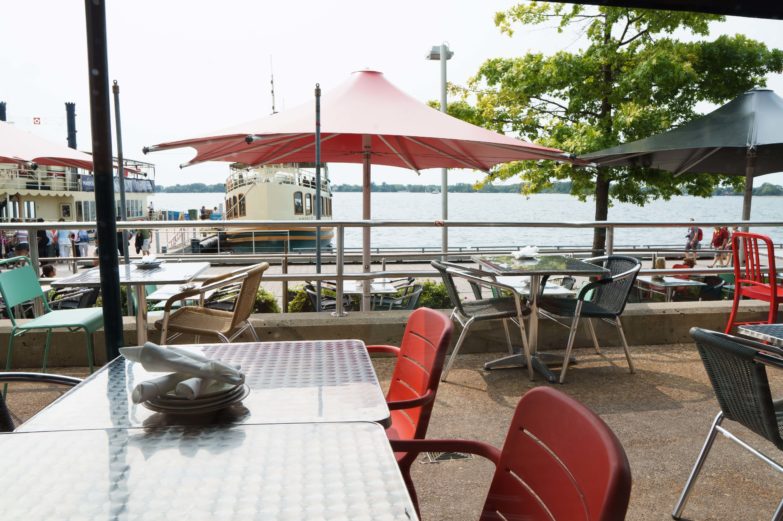 Although Pie Bar prides itself on being a pizzeria, the menu has many other fantastic Italian classics. There’s a variety of pasta options, salads, shareable appetizers, and gelato flavours to choose from as well. However, the menu overall was quite small.

Like many other restaurants in Toronto now, Pie Bar had accommodations for all kinds of diets. There were a handful of vegetarian dishes and an option to make pies tolerable for gluten-sensitive individuals.

Price wise, Pie Bar was fairly standard and a meal here will likely cost you $20-$30 before drinks. Most of the pies and pasta options treaded around $20 and the sharing plates and salads costed slightly less. Regular entrees—salmon and chicken parmesan—were also available for around $25. 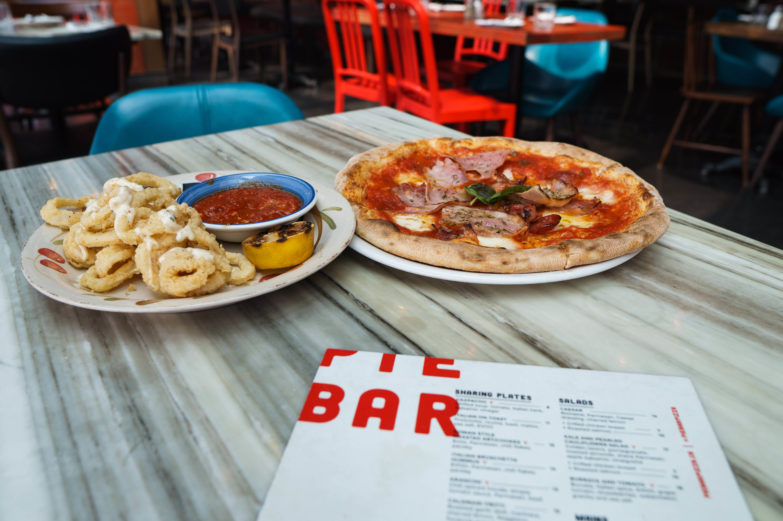 I ordered a sharing plate as an appetizer—more specifically the Calamari Fritti. It came out at the exact same time as the pizza, but I didn’t mind this too much. The calamari came with a marinara sauce, a roasted garlic aioli, and a charred lemon. The calamari was light and flaky, but I found it not hot enough. The dish likely sat around for a while before being brought to my table since they were only slightly warmer than room temperature. The marinara and aioli were fairly standard. They didn’t blow me out of the water but complemented the dish nicely.

I’m not sure why they charred the lemon for the calamari. For me, the charred lemon didn’t bring anything that a regular lemon couldn’t have. I also noticed a mountain of charred lemons in a basket by the open kitchen, so it was evidently not charred to order. And therefore, the fruit likely lost some of its smoky, charred aromas in the process of sitting around. 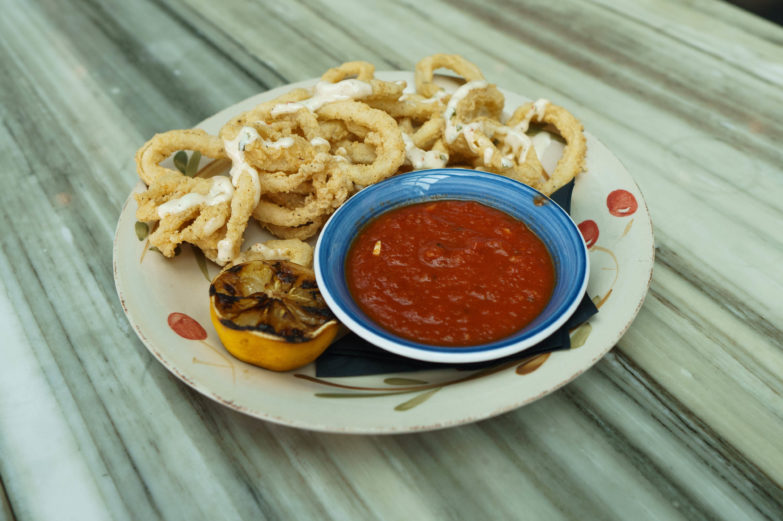 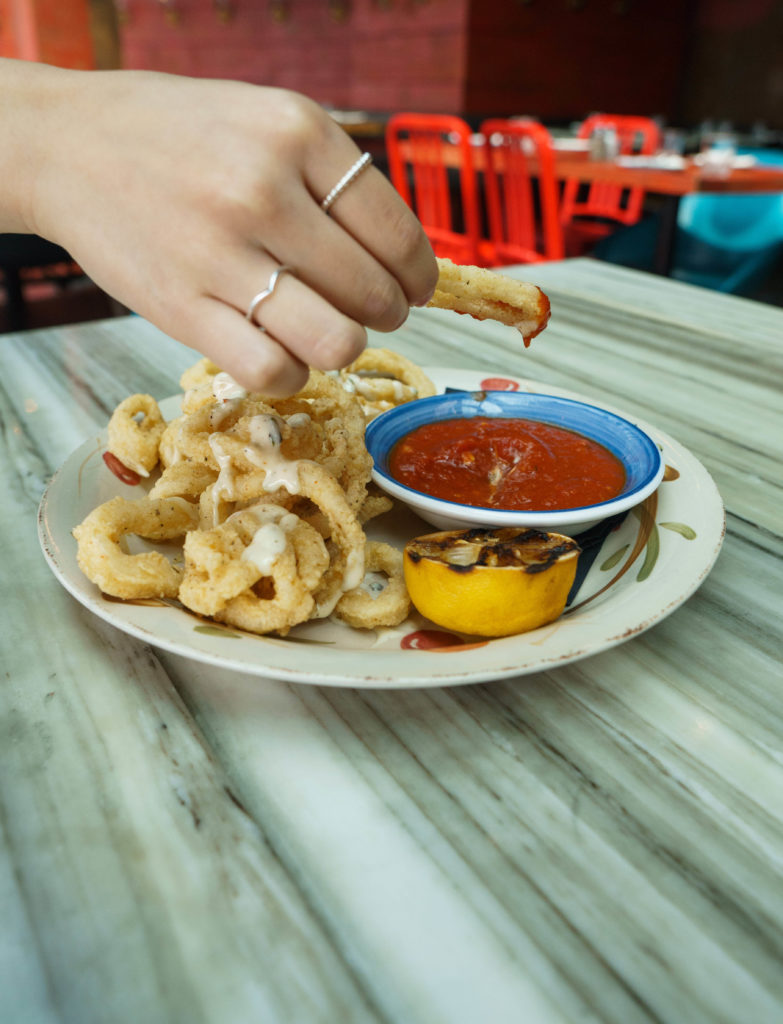 I came to Pie Bar, so obviously, I had to get one of their "legendary" pies. With eight different pizzas to choose from, I asked the waitress for a recommendation:

"All the pizzas are very popular," said the waitress "But The Godfather is the most popular and my personal favourite."

The pie arrived cut in four quarters, so eating each slice was a bit of a handful. The ingredients were not well distributed among the whole pizza and it was a bit tough to get everything onto another plate.

I was disappointed that the bacon didn’t have the gamey taste that I was expecting. The boar tasted like a pretty regular soft bacon. And I wasn’t a fan of the crust either. Some parts of it were soggy from all the sauce and didn’t have the chewy texture I expected from a premium pie crust. I was impressed, however, with the San Marzano tomatoes. The red sauce that they used had lots of flavour and sweetness to it, likely owing to those beautiful tomatoes.

Overall, the Godfather pizza was okay. I think for next time I want to give the prosciutto pizza a shot, and the Angry Bee, with its Calabrian chilis and honey, also looked interesting. 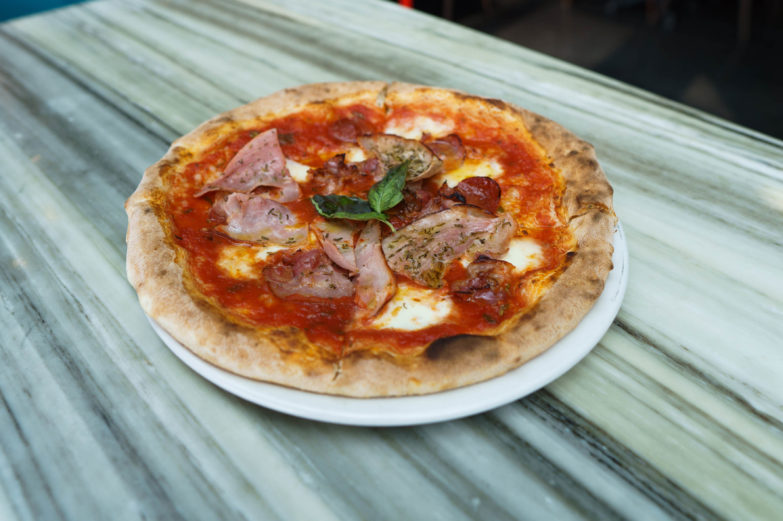 After finishing the calamari and the pizza, I decided to order the affogato. Pie Bar had a massive selection of gelatos to choose from and the menu recommended either the vanilla or Nutella gelato for an affogato. But when I ordered the Nutella affogato, the waitress informed me that they were out of Nutella gelato. And so, I settled for vanilla.

The vanilla gelato came in a large glass that was filled to the top—there must have been at least two or three scoops in it! Stuck to the gelato was a biscotti. Yum.

The affogato came with an espresso shot on the side, which I added myself. I loved how the vanilla and the espresso came together to form an amazing coffee dessert. As I dug deeper into the affogato, the coffee flavour got stronger. It was like a crescendo of coffee taste, which I really enjoyed. Even tasting the vanilla gelato on its own, I was highly impressed. It was creamy and I liked how it had a very strong, organic vanilla taste. My only complaint was that the gelato came slightly melted, even before the espresso was added. 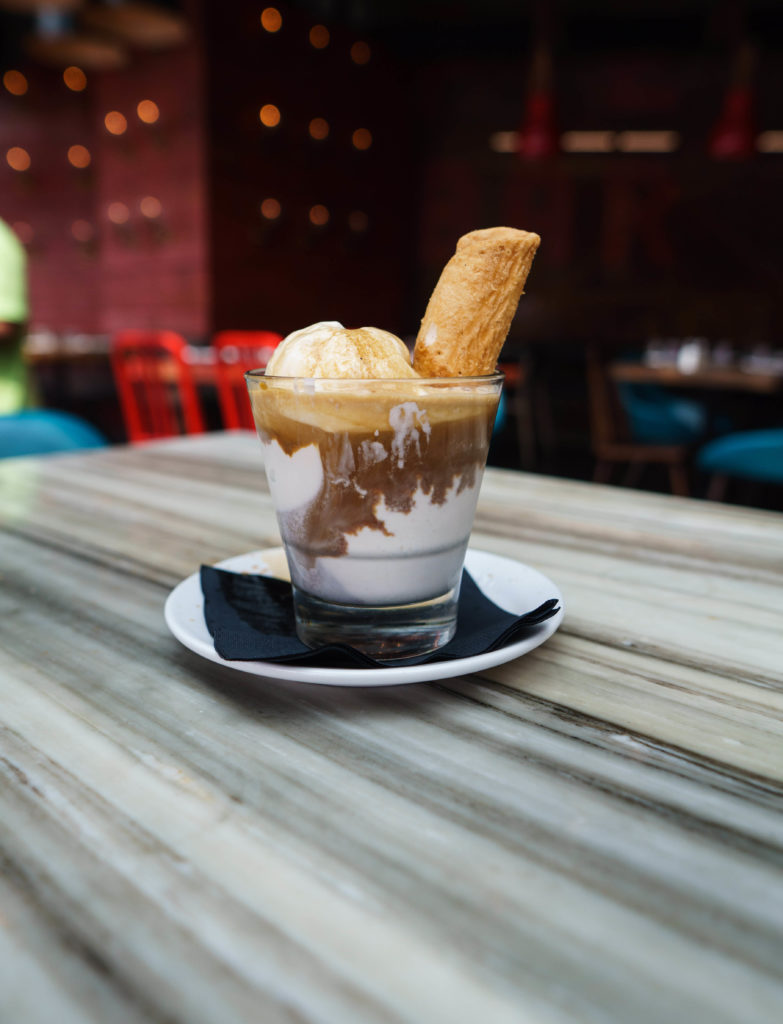 When I got to the restaurant, the host was away from the front stand even though the restaurant had just opened for the day and the place was virtually empty. He stood behind the bar wiping glasses and I tried to get his attention without any luck. Finally, the bartender noticed me waiting and finally got the host’s attention. Not a great start.

He led me to my table, and thankfully, a much nicer and attentive waitress replaced him. This lady was very helpful throughout my dining experience. She explained the difference between the white and red pizzas and provided recommendations on the most popular items. This waitress really lifted my spirits from the negative experience earlier on. 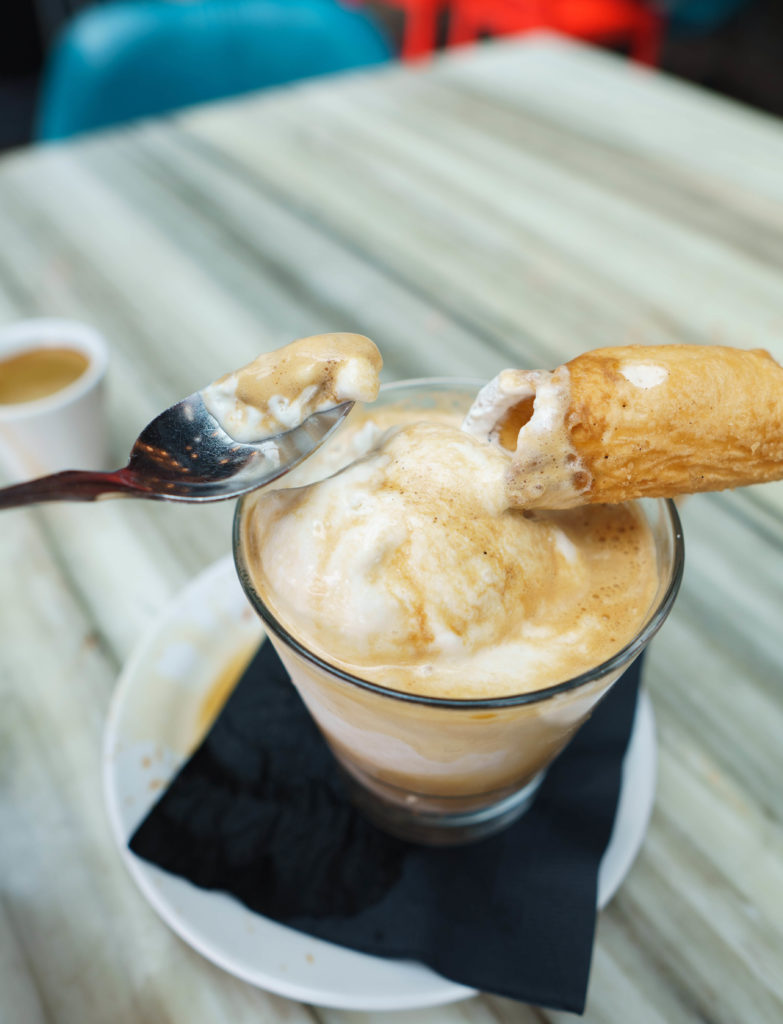 After the calamari, the pizza, and the gelato, I was very full. I felt good, but I could feel the post-meal drowsiness hitting me. The meal was luckily not too rich (aside from the dessert), so I didn’t feel that bad at least. After an hour of trying to not fall asleep, I was back to my old self.   Pie Bar was a great place, overall. I look forward to coming back again.