Opened last fall in Toronto’s Yorkville district, Planta bills itself as a "100% plant-based" restaurant. While this might seem to be just another way of calling it a vegan restaurant, it’s in fact a way of differentiating itself from vegan and vegetarian cafes and restaurants in the city. "Vegan" and "vegetarian" restaurants often cater to a lifestyle rather than simply a dietary choice. This is a growing trend in the restaurant world, with many highly-praised restaurants, like Amanda Cohen’s Dirt Candy in New York City, eschewing the vegan/vegetarian label while still ascribing to the dietary strictures. 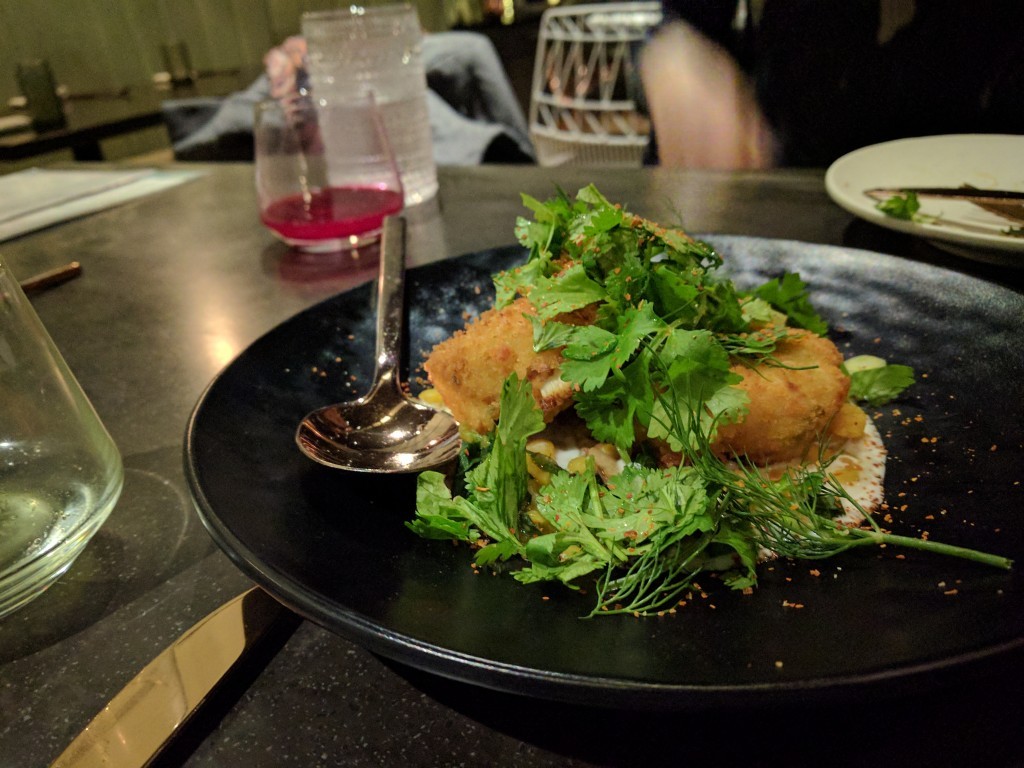 In one sense, this helps bring vegan and vegetarian food to the masses: It’s easy for meat-eaters to eat at Planta, in part because at no point would a meat eater feel like their experience is anything less than high-end downtown eating. It helps too that the food at Planta never feels like it’s missing anything without meat. Maybe the best thing that can be said is that at Planta, even the most carnivorous of eaters is likely to enjoy a completely meat-free meal.

While a vegan restaurant, Planta avoids slipping into some of the more tired affectations of similar restaurants. Which is to say that there’s nothing in the decor that immediately signals what sort of place it is. This is refreshing; at times, the physical virtue signalling of vegan and vegetarian restaurants can overshadow the quality of the food and experience. Constant reminders of the meatless-ness of a place are at best a distraction and at worst feel like an apology for a lesser quality meal.

This is all to say that Planta’s major success as a vegan restaurant is that nothing about it looks or feels much like one. The decor is filled with subtle nods to its earthy philosophy: the copper silverware, the overflowing planter boxes built into the upper half of the southern interior wall, or the fern-leaf wallpaper (which, at a dimly-lit dinner sitting, is hardly noticeable) all create a space which is decidedly vegetarian, but in a way that is exceedingly comfortable, not political. The effect works—almost immediately do you forget you’re eating at a vegan restaurant, rather than a hip, chic downtown diner. 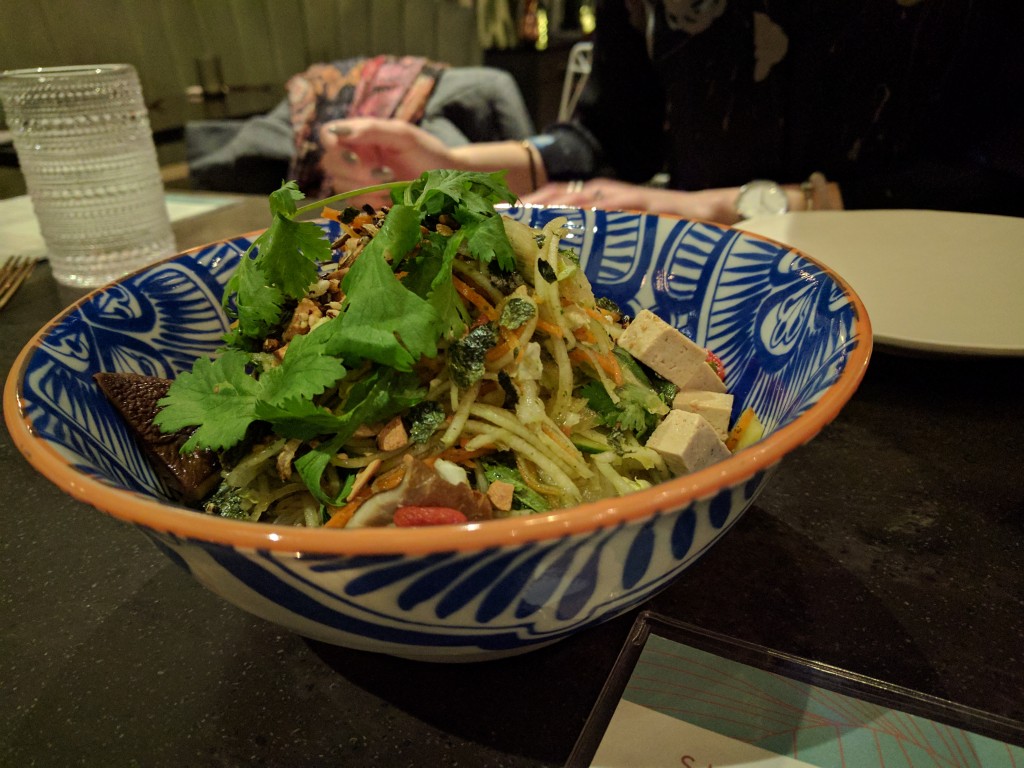 Everything in Planta feels comfortable, and chic enough that it feels at home in Toronto’s Yorkville neighbourhood. It’s unmistakably hip, with a built-in DJ stand in the middle of the restaurant, and Instagram-friendly hanging chairs in the corner. Over the speakers, you’re more likely to hear top 40 or house music than classic dinner music — fitting, for the largely young, stylish clientele that fill the restaurant. In many ways, the restaurant toes the line between swanky and accessible: it is, after all, a new Yorkville hot spot, but there’s little here that is unwelcoming to everyday folk. The servers are mostly young, and are all dressed in matching long-sleeve t-shirts.

The dinner menu offers a number of different types of meal. There are two appetizer sections—Small Plates and Snacks. The former offers more traditional appetizers, like vegetarian soups and dips, like their Coconut Ceviche, while the latter offers vegetarian takes on what might be best called finger foods, like fried kimchi dumplings, or cauliflower tater tots. In addition to these selections (where, evidenced by dishes like the 18 Carrot Hot Dog or the Cauliflower Tots, the inventiveness of Chef David Lee is on full display) there is a full section of salads, a pizza section, and an entrees section. The menu has range, but in many ways is also quite restrained. This, I think, is to its benefit: simple dishes like vegetable crab cakes, vegetable lasagna, or a vegetable burger with truffle fries allow for diners to take in the powerful flavours of the vegetables themselves—without being overpowered by complex dishes and combinations. Ultimately, what it creates is a menu that offers pleasantly unexpected versions of familiar foods. 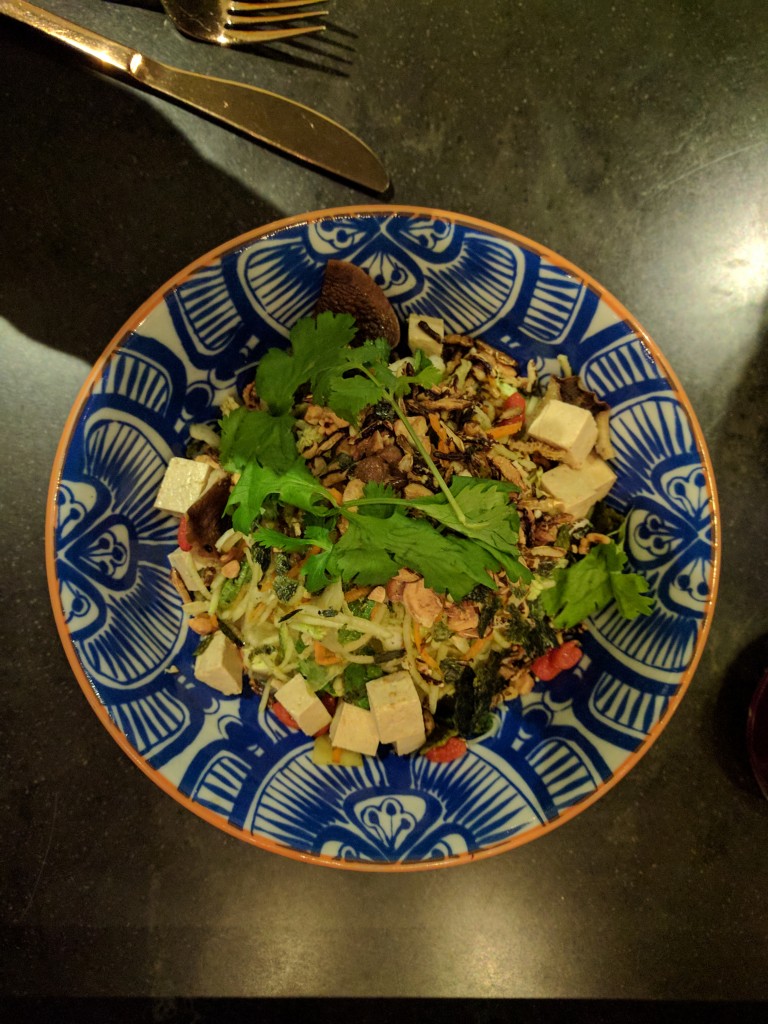 Another view of Thai Noodle Salad

I went with the Thai Noodle Salad ($15.25) which combined fresh fruits (like papaya and mango) with a mix of vegetables, herbs, chilled noodles and crunchy cashews — all with a requisite amount of thai spice. The first thing worth noting is the portion size: with that many ingredients, I wondered if it would all be a bit much, but given the ample portion size allowed for balance and space for each ingredient to breath. To my surprise, the richer thai spice takes a backseat in this dish to the freshness of it all. The papaya, mango, cucumber, and lime juice stand front and centre in this dish to create something that tastes incredibly sweet and light, rather than spicy and nutty.

My curiosity was peaked by the Crab Cakes ($21.75) — surely, something that even vaguely resembled a crab cake out of vegetables was worth trying. What was most impressive was the texture, which while it wasn’t exactly like a crab cake, wasn’t entirely un-like one either. The heart of palm used to make the cakes managed to stand in well enough for creamy, fibrous crab meat, and the bed of dal and wilted spinach that the cakes sat atop added a rich (and slightly spicy) note that held the whole thing together. This is classic vegetarian comfort food in a way, and after such a fresh salad, something fried, savoury and crispy was an excellent choice. The portion size — only two cakes — left something to be desired (especially at the price point), and had I not gone with the (very plentiful) salad as a starter, I might be less forgiving on this front, but I could understand why some people might be left wanting a bit more on their plate. 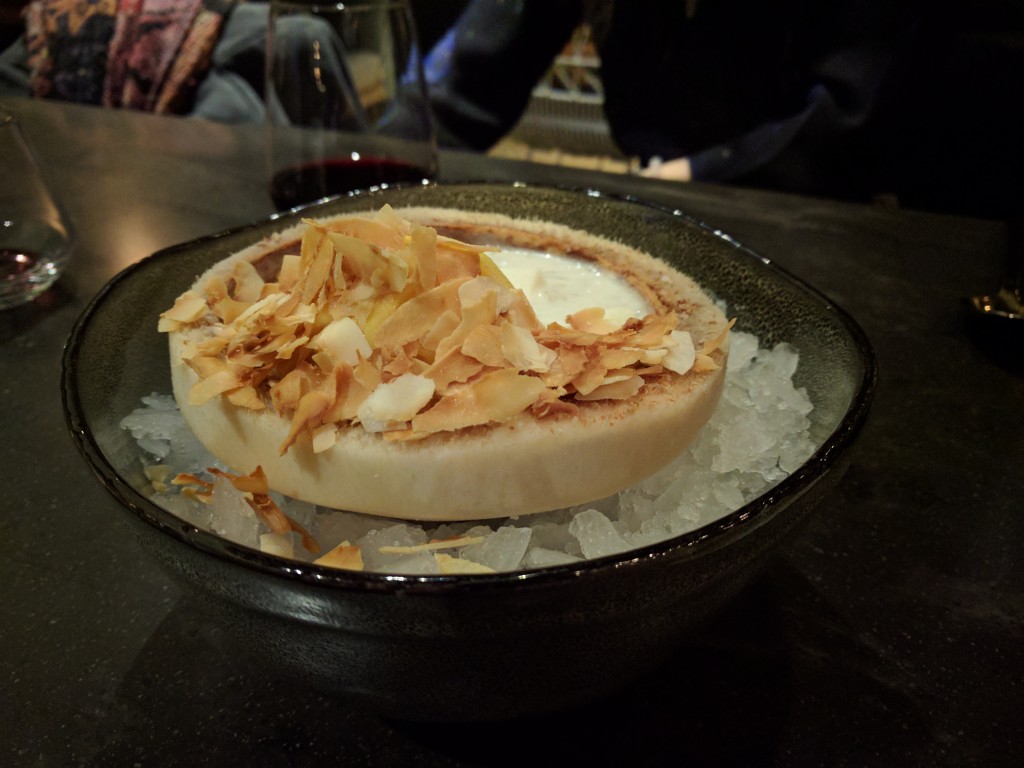 For dessert, I ate a dish called the Coconut Passionfruit dish ($10.50), which was a coconut milk and chia seed pudding, along with pineapple sorbet. Presentation was a major selling point of this dish: you eat all this out of a hollowed out coconut, itself sitting inside a bowl of ice chips. It’s often easy to forget that a plant-based ethos presents some interesting challenges for dessert, with all manners of cream out of the picture. The coconut dish answers to this problem well: it doesn’t try to be overly sweet or to simulate any other sort of sugary dessert. Rather, it’s light and fresh, and relies on a small dollop of ultra-sweet pineapple sorbet to satisfy any lingering sweet-tooth you might have. It’s also an excellent example of how dessert can succeed without being a heavy, filling end to a meal.

Alongside a handful of beers and an average-sized cocktail list, Planta offers an impressive—and unique—wine list. There’s a lean, naturally, towards organic, sustainable, and biodiverse (a term meaning the grapes are grown in environments with a wide range of produce and animals) wineries, which differentiates it from the abundance of Italian-themed wine bars throughout Yorkville. What won’t differentiate them, though, is the prices: most of their wines are only available by the bottle, and though there are a handful of affordable options, the overall trend lists more towards expensive than towards affordable.

A hidden gem for the non-drinkers in your party is the juice cocktails: while not an extensive menus, my dining partner and I both sampled some of the juices and found them to be incredibly tasty. At nearly $8 a piece, though, they are nearly as expensive as a glass of wine, so drink slowly. 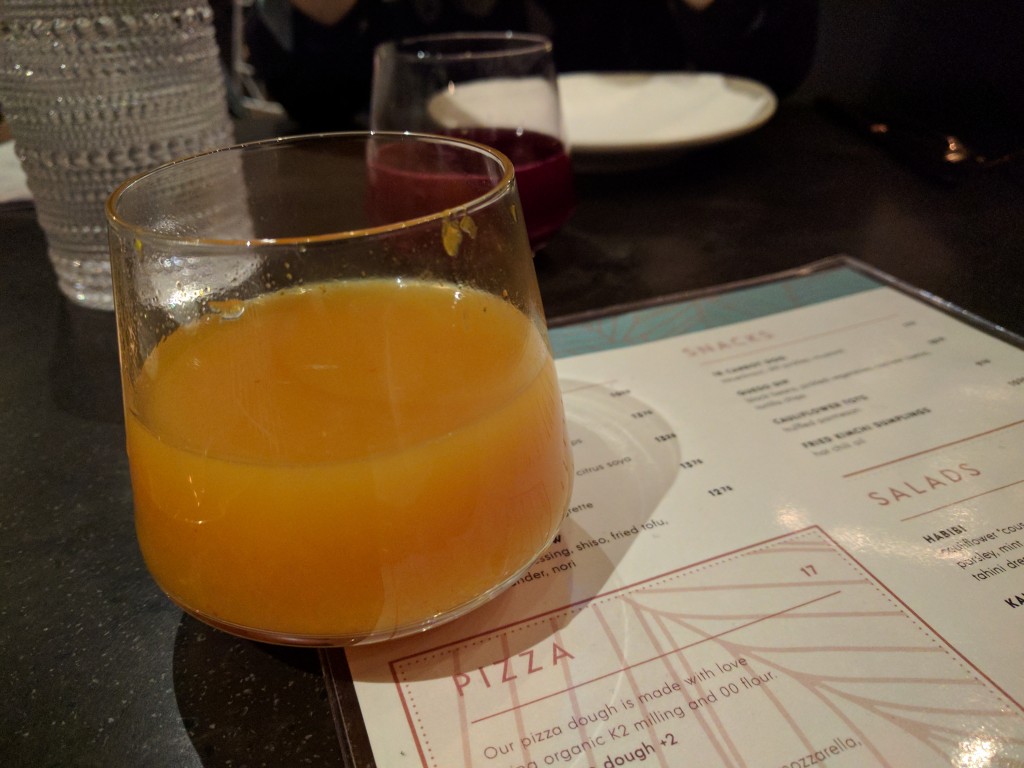 The servers at Planta are friendly, approachable and work incredibly well as a team. Your water glass rarely stays empty for long, as a passing server is always ready to fill it. Different members of the wait staff stop in to check in with how your meal is tasting and if there is anything they can get you. This convivial atmosphere works well, and keeps Planta feeling like a down-to-earth place to eat. None of this comes in sacrifice of professionalism and a dedication to the customer. Case in point: my partner’s glass of wine, a first pour from a new bottle, tasted spoiled, and our server was quick to replace it with a new glass of her choice, and apologized profusely. It would be hard to find a restaurant with a more welcoming and friendly service staff.

There’s so much on the menu at Planta that part of what I feel after finishing is the desire to come back, which is a good thing for the restaurant. I didn’t get a chance to try their pizzas, for instance, which as I watched them go by my table looked too good not to try. And there’s something particularly satisfying about an entirely vegetable-filled meal. For all these reasons, and more, Planta lives up to pretty much everything it promises, and is definitely a restaurant to check out soon.

One thought on “Planta”

I’m really looking forward to visiting this restaurant. I’m vegetarian but my husband is not very keen on it. Maybe he would enjoy this kind of plant-based meal as well!