Ah, the majesty of Indian food. Half the reason for Indian cuisine's congenial allure might be that most of its dishes are served hot. And many are either soupy or stewy or served on a sizzling platter (see: "served hot" sic,) explaining that warm-hug-to-the-pancreas-on-a-cold-day type of feeling. On top of that, if anything the dairy industry tells us is true, almost every Indian dish has enough calcium to fully build a new human, adding the healthy element of vitamins. Well, that and the gobs and gobs of cream. While the reasoning behind the enjoyment of Indian cuisine might not be so easily calculable (although butter+cream+garlic+chicken doesn't take a physicist to decode,) whatever your personal reason for putting its glorious merger of palate activating flavours into your bloodstream, the main one remains: it just tastes good. Add some great service, tasteful ambiance, and a lingering, obviously happy full house of patrons, and you get a pretty decent recipe for success and satisfaction. And it's just so at The Copper Chimney Authentic Indian Room. 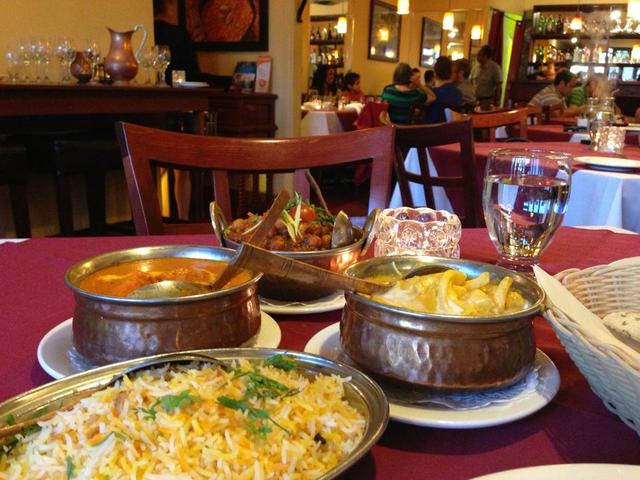 The Copper Chimney menu by Cristina

Just south of Wilson on Avenue Road in Toronto, The Copper Chimney is nestled snugly in a block-long row of two-rise shops, bakeries, and nail salons, yet still manages to stand out from the crowd. And that could very well be because of its glowing orange sign. Certainly intended to fire salivary reflexes in a subconscious nod to tandoori and butter chicken, the blaze of orange practically blinded me as I approached. Can't fault them for making it easy to find. And hey, I don’t mind. I love orange. With a street level patio, and signature Harry Potter-esque black iron lantern, the Chimney feels welcoming upon first sight. A pusher of authentic Indian fare, The Copper Chimney delivers a menu of comestibles that stands up handsomely to the deep bench of Indian food players in Toronto. It does a good job offering a wide variety of dishes, providing options for the vegetarian, meat lover, and everything in between. The Copper Chimney has two seatings (from Tues-Sat): lunch (12-230pm) and dinner (5-10pm), with alternate schedules on Monday (5-10pm only), and Sunday (3-10pm.) They also do a bustling takeout business with a 10% discount on takeout and delivery orders. Now, to the goods. 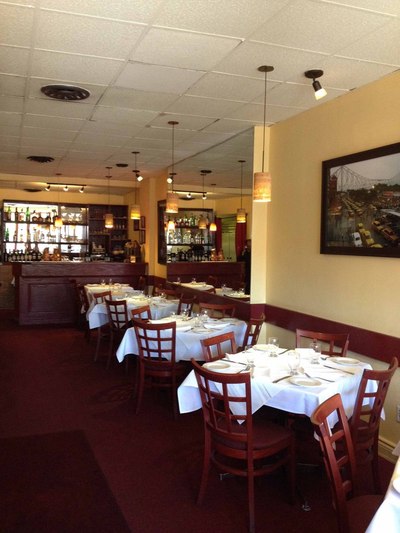 The Copper Chimney interior by Zomato

Through two sets of dark wood trimmed doors, the restaurant opens to a rectangular layout, with relatively limited seating, handling 30 or so at max capacity. While other reviewers have slighted The Copper Chimney for its blasé decor, I found it simple, homey, and perfectly suitable. It wasn't flashy to be sure. But with its ever soothing taupe coloured walls, stock paintings of Hindu-deity-inspired scenes, three half-wall mirrors, dark wood trim, and blazingly white tablecloths, the almost full house that ate along with me didn't seem to care one bit what was on the walls. It certainly didn't deter the controlled conversational raucousness, nor the fact that turnover seemed to be low; people liked their meals, drank, talked, and lingered. That says a lot. I also noted that the Chimney's dark mauve carpeting did a magical job absorbing sound, keeping the would-be din to a dull roar, in addition to creating a warm feeling underfoot that was somehow comforting. Lighting for my evening meal was date-night dim, a nice contrast to the blaze of outdoor signage, and was perfectly fit for an intimate meal. While the tables were tucked a little close together, there was no noticeable overlap in terms of feeling squished or overheard. They maximize their limited space well, with enough room to get your elbows all up into some vegetable balls and not worry about poking out your neighbour's eye. Also nice, was a half wall separating the seating area from the stairs to the basement washrooms. Those, while a very powdery Liberace blue—and not the epitome of modernity—did the job and left nothing to be desired.

One of the first things I noticed after being seated at my table (near the bar), was the long line of takeout orders ready for pick up. It's always a good sign—before even seeing a menu—to witness a place practically frothing over with takeout orders. This means someone likes their food. And after eating there, I'd follow suit. 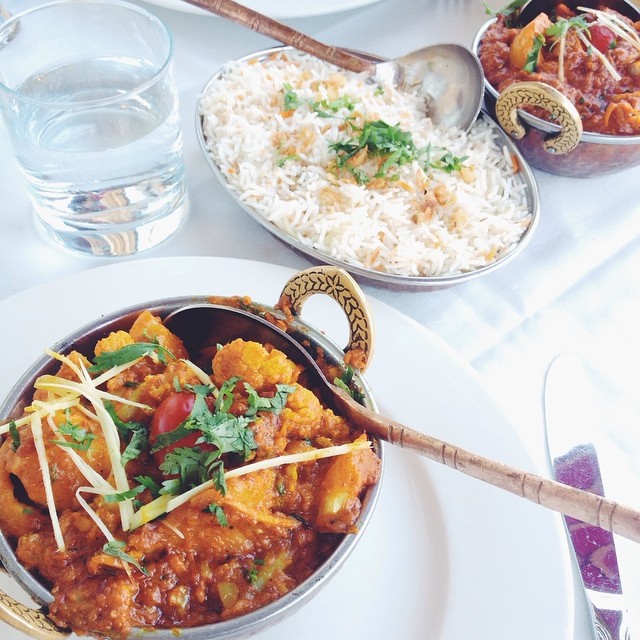 Papadams as a pre-appetizer; appetizer of garlic vegetable balls; mains of hariyali chicken tikka and butter chicken, an order of garlic naan and regular naan; chai tea for dessert.

While I’ve come to expect the glory of golden papadams as Indian cuisine’s standard pre-app, The Copper Chimney upped it a proverbial notch, with their version being rolled, like newspaper. As they’re soft and malleable uncooked, papadams will theoretically take whatever shape they’re cooked in. So while the rolling thing isn’t necessarily the result of a zero-gravity space shuttle experiment, they were still a phenomenal departure from the standard flat version. The order of two papadams were salty, crisp, light, and delicious. Everything they should be.

My garlic vegetable balls appetizer was fashioned from a thick vegetable paste molded into balls and deep fried, with a fairly heavy tomato-based sauce. It was a tad on the sweet side for my taste, reminiscent more of an Italian flavour profile than Indian. Regardless, they were tasty. With a substantial and satisfying texture, they were not overly fried, and had a shredded cabbage garnish to complete the dish. Six delectable balls came in the serving. 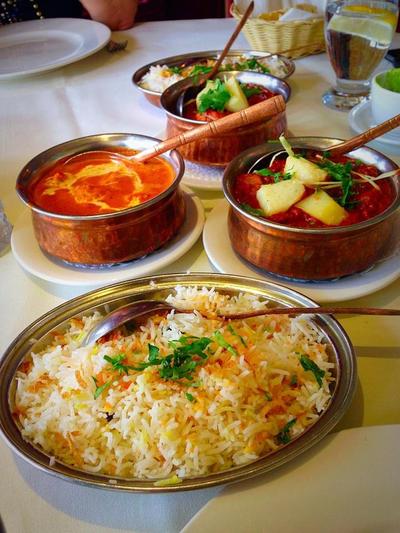 For mains, I balanced my need for known classics with a dash of adventurous experimentation by marrying a standard butter chicken with a hariyali tikka. The butter chicken was creamy and delightfully rich, everything you'd expect from India’s most commonly known dish. As I've experienced before, the chicken-to-sauce ratio was a little low, leaving my cauldron of glorious gravy to be mopped up with naan bread. Not the worst fate in the world, but a morsel or two more of chicken would have been nice. The hariyali tikka gave me exactly what I was looking for in the all too risky try-something-new department. Tikka is a clay oven cooking method where protein (chicken in this case) is chopped into bite sized pieces, marinated in a variety of spices, loaded onto skewers (like kabobs) that go vertically into an cylindrical, open topped oven. It’s heated from the bottom (to 300 degrees), and cooks through baking and/or convection. Interestingly, this oven is also where naan is (or can be) baked—unexpectedly—by being stuck onto the vertical walls of the oven itself (as raw dough) and cooked. The hariyali part of the mix is a melange of mint, cilantro, and tandoori spices. When the dish arrived at my table, it initially looked like a combination of The Hulk and Brussels sprouts. Like a little Bruce Banner chicken had absorbed too much gamma radiation. Colour and Avengers references aside however, the Hariyali’s aroma was heavenly. Its flavour profile was an avalanche of charcoal-barbecued chicken, with plenty of smoke and a hint of tandoori spice. It had a shredded cabbage garnish, and came on a sizzling cast iron serving dish. For a rice substitute, I ordered a garlic and a regular naan bread. The garlic version is worthy of note, as its garlic ratio was absolutely perfect and absolutely fresh. With a tasteful application of parsley, the naan came off almost like an insanely tasty cheese-less pesto pizza. Ten delicious points, and an honourable Jenny Craig mention for cutting the overall carb content.

Okay, first point of note regarding drinks: a few moments after ordering a Mill St. Tankhouse, it arrived at my table—with a chilled glass. A chilled glass. I mean, call me easily impressed if you like. But a chilled glass? Total. Style. Most places you can certainly expect a clean glass, even a fancy glass. But not a frosted, chilled glass. Review done. Gold star. Fifty points. 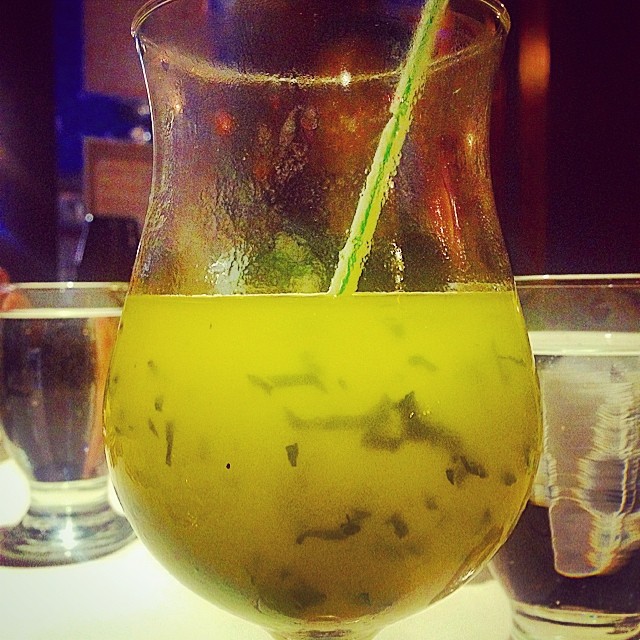 Other than a few glaring apostrophe/pluralization errors, The Copper Chimney’s drink menu was respectable if not minimal. Rum mojitos ($7) were the only cocktail option, with a couple seemingly out of place champagne offerings, a not half bad beer list (including a few Ontario micros: Mill St. Tankhouse and Creemore Traditional Pilsner, $5 to $6), red wines from Argentina, Chile, France, California, and Italy ($5 to $8/glass, $14 to $16/half liter, $26 to $29/liter, $28 to $34/bottle), and Aussie, German, Italian, and Californian white varieties ($7 to $9/glass, $28 to $34/bottle).

With just two dessert options, I opted for a chai tea digestif. Like butter chicken, an Indian restaurant’s chai tea can be a litmus test for legitimacy. While certainly not an expert in the math, as far as I know, it’s traditionally made with raw black tea, boiled together with milk and cardamom pods. The boiling-together part is a thing, as opposed to just using a black tea bag, and adding milk after. Obviously the cardamom pods are a thing as well, adding a boatload of flavour. The Copper Chimney’s version was in the middle of the road; I’d say they did the boil-together part, but not the cardamom pod part. Just a guess. Not spectacular, but certainly tasty, and a perfectly satiating aprés dinner belly soother. It comes unsweetened, and half a sugar pack gave it a nice dessert-y hint of sugar.

I'm going to refer your attention back to the Drinks section to reiterate the "chilled glass" situation. The frosty pre-chilled beer glass was a cherry on top of a meal that hadn’t even been cooked yet. Generally speaking, The Copper Chimney was great on service. I was welcomed with a smile at the door, and my server seated me promptly and followed up quickly for a drink order. I needed more time, and he came back a few prompt minutes later. I guess I can say prompt is a key word here. Lots of promptness going on. Which is good. I counted two main servers in the room, with a third (the owner himself) answering the phone (which was ringing off the hook,) and packing up takeout orders (which were backed up in a long line behind the bar,) in addition to a fourth who joined the fray nearer to the end of my meal. Generally, I was tended to spectacularly. I never had to wait very long (though I was sitting one table away from the kitchen,) and all my needs were taken care of, well, promptly. Considering the house was full for most of my time there, it never seemed hectic or overwhelming, and the staff danced through the aisles with aplomb. Not a lot more to say. Solid nine on service. 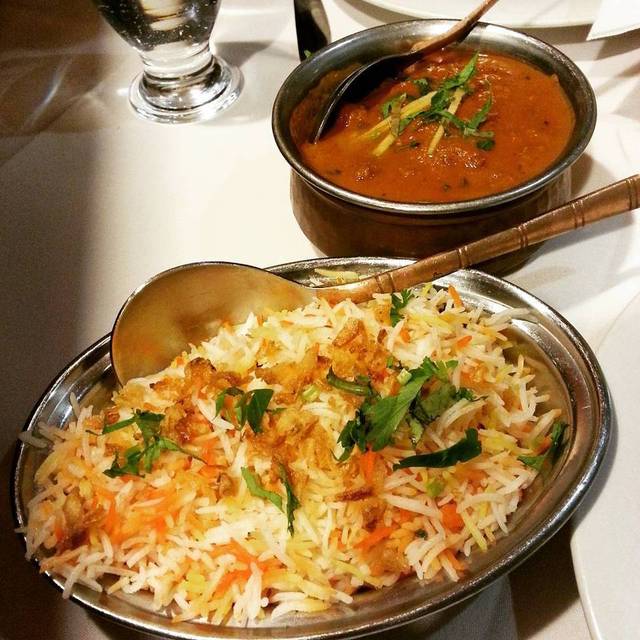 I'd be lying if I said I didn't feel a little heavy after the meal. Add a bit of fatigue with all the blood rushing to my stomach, and it's all pretty par for the course. There certainly ARE other meals to be had at The Copper Chimney (and, you know, Indian restaurants in general), but I won’t really hear of it (aside from the Hulk chicken of course). Suffice it to say, I was full. And satisfied. And yes, I would go back. Especially for the hariyali "Hulk" tikka chicken.

One thought on “The Copper Chimney”

I truly love Indian cuisine, and Banjara’s butter chicken was simply perfect. So bad I live that far away from the restaurant.